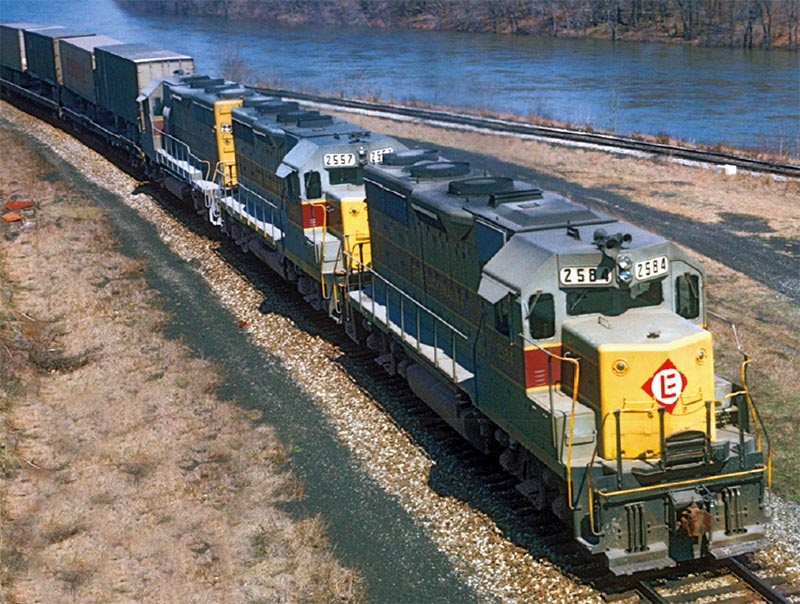 This April 1974 Jim Boyd photo of an Erie Lackawanna piggyback freight powered by a trio of GP35s illustrates one of the major spotting features of late-production examples. Behind the cab on lead unit 2584 notice the bump before the exhaust stack, this is the “raised dust bin” feature, which is not present on the second unit’s roof. Phase II GP35s from 1965 sport this raised dustbin feature. — Kevin EuDaly collection 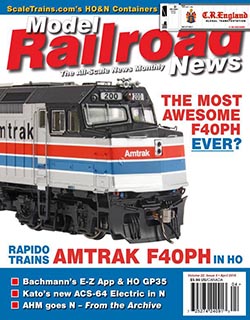 By MRN Staff/photos as noted

Announced at the 2016 Amherst Railroad Hobby Show, Walthers plans an early 2017 delivery for a new addition to its HO-scale Proto-series diesel line. The model is Electro-Motive Division’s (EMD) GP35 as it appeared during its final year of production in 1965. Six road names will come in the first release: Burlington Northern, Chesapeake & Ohio, Erie Lackawanna, The Milwaukee Road, Santa Fe, and Southern Pacific.

This all-new model will include road-specific details on its shell and will come equipped with a five-pole, skew-wound, high-torque, and high-efficiency can motor with flywheel. The drive will include helical cut gears with 14:1 ratio for smooth, quiet operation. Hobbyists may select from standard DC GP35s or buy models with factory installed Digital Command Control (DCC) and SoundTraxx Tsunami sound systems.

Introduced in 1963, EMD sold more than 1,300 examples of its 2,500-hp GP35 diesel locomotive to railroads in the U.S., Canada, and Mexico. The GP35’s appearance altered during its approximately two-and-half year production period, with variations in hood access doors, louvers on cab access compartments, and other details. The last six months of production is what railfans commonly term as late production or “Phase II” examples. There are variations among these Phase II GP35 examples, but the major spotting features are found throughout. The features to look for are a thin or straight frame that lacks the angular enclosure around the fuel filler, rooftop raised dustbin hatch behind the cab, seven latches on the tall engine access doors on the long hood below the dynamic brake area, and only two horizontal louvers on the forward cab access or battery box door.

EMD’s popular GP35 prototype came to HO modelers first in the form of brass imports made by Tenshodo in Japan and distributed by Pacific Fast Mail. A plastic GP35 from Athearn came in 1966 and was an early production example. The next company to produce plastic HO-scale GP35s was Kato in 1992 with its Phase Ia model. Kato followed its initial Phase Ia GP35 in HO with Phase Ib and Ic variations. Next came Bachmann’s GP35 in 1994, which was also a Phase I effort. Bachmann’s effort was originally in its “Plus” line and later migrated to Spectrum (1997) and more recently saw E-Z DCC and new E-Z App examples produced. Athearn’s current GP35 in its Ready To Roll catalog came to market in 2005 and used a former Rail Power Products shell (introduced in 1991) with Phase Ia characteristics as the basis for its offering. MTH Trains introduced a GP35 in its HO line and provided both Phase I and Phase II carbodies.

For its debut, Walthers plans a mix of eras for the road names for its new Proto GP35 Phase II model. Rumors persisted for years that a GP35 was in the works from Proto 2000 after the company introduced its GP30 in 1999. This all-new effort coming is the first GP35 for Proto’s HO catalog. Operators and collectors of HO diesels will find a reason to consider purchasing this new GP35 with its uncommon late-production appearance; Walthers likely will work backward to earlier production bodies for future offerings. 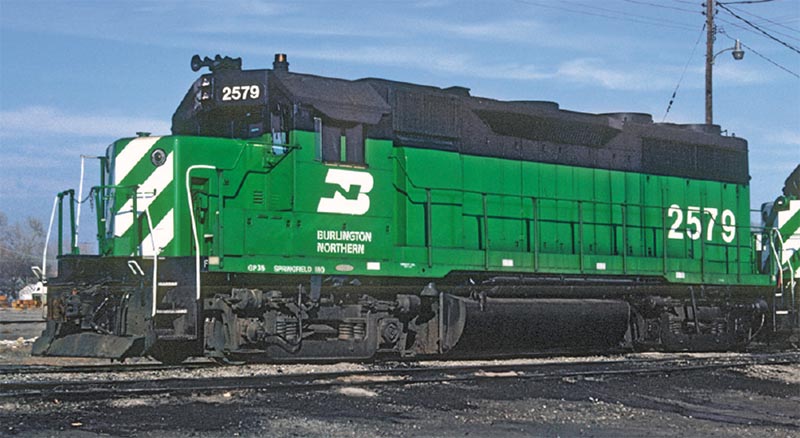 Burlington Northern began with GP35s collected from Chicago, Burlington & Quincy and Great Northern. More examples joined the roster with BN’s inclusion of Frisco into its system in 1980. Resting in Enid, Okla., in early 1982, BN 2579 is a former Frisco GP35 with AAR Type-B trucks from traded-in Alco FAs. This view shows the “ thin frame” feature of late-production GP35s. The frame angles up over the fuel tank, and no angular frame protrudes down to surround the fuel filler. The pair of single louvers on the battery box access door on the steps coming down from the cab is also a Phase II attribute. This access door is directly above the white “GP35” stencil on the sill. — Kevin EuDaly collection

Chesapeake & Ohio purchased 36 new GP35s during 1964 (a mix of Phase Ib1 and Ib2 bodies) but ended up adding six more by the end of 1965. The half dozen latecomers to C&O’s GP35 roster came as the result of wreck replacements from EMD. Walthers plans to release models of some of the 1965 replacement GP35 Phase II units (3537; 3563; 3583; and 3584). Decked out in as-delivered Enchantment Blue with yellow nose and sill, the C&O GP35 models will feature Leslie RSL-3L-R air horns; standard dynamic brake hatch; four jacking pads; short can-type air filter/dryer; and a 2,700-gallon fuel tank. 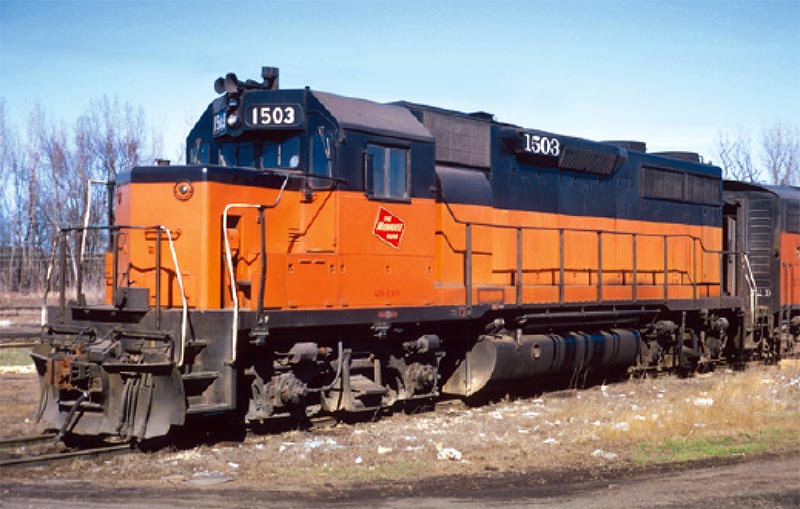 The Milwaukee Road picked up a dozen GP35s in 1965 from EMD. The road renumbered its fleet in 1968, and this view of No. 1503 shows the appearance that Walthers planned for its models. Among the coming Proto GP35s, The Milwaukee Road examples will be the only ones produced with large 3,000-gallon fuel tanks, the other roads feature 2,700-gallon tanks. — Kevin EuDaly collection

Santa Fe examples will come in the road’s as-delivered scheme with a blue body, yellow ends, and large billboard lettering. This paint scheme remained the road’s official freight livery until the summer of 1972’s return of the Warbonnet in blue and yellow colors. Santa Fe GP35s (1387; 1401; 1409; and 1415) coming from Walthers are based on deliveries to Santa Fe of 100 units (1350–1449) during the spring/summer of 1965. Road specific details on Santa Fe examples will include Leslie RSL-3L-R air horns; can-style radio antenna; standard dynamic brake hatch; four jacking pads along the frame; coil-type air filter/dryer; and a 2,700-gallon fuel tank. 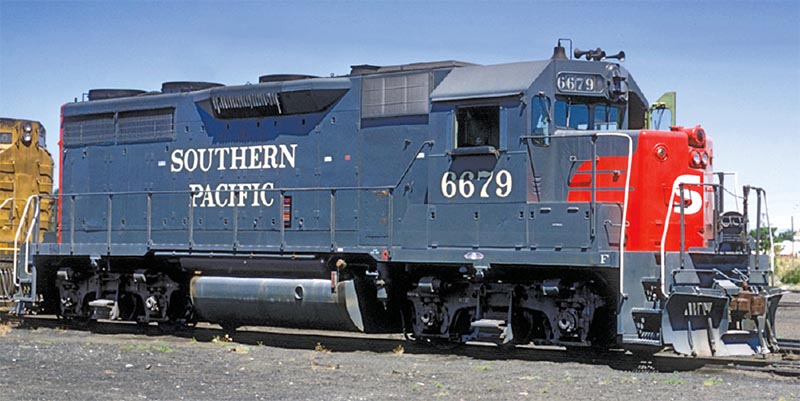 Southern Pacific and its St. Louis- Southwestern or Cotton Belt subsidiary purchased a number of GP35s, taking delivery of the fi rst examples at the end of 1963. Late 1965 saw the final SP GP35s arrive on its system, and this span of time presented a combined SP and Cotton Belt with a variety of production phases in its roster. Between the SP and Cotton Belt, this system owned more GP35s than any other railroad. According to Joseph Strapac’s Southern Pacific Historic Diesels Volume 13, the road began a renumbering program in 1965 and did not advise EMD of the change. The manufacturer delivered the last of SP’s GP35s with 7700-series numbers. The road soon renumbered its GP35s into 6625–6679.

Walthers will provide its coming SP GP35s (6660; 6665; 6673; and 6676) with the road’s signature light package, consisting of twin horizontal headlights in the nose beneath a red emergency signal light with upper twin headlights that will include a Gyra-lite. Other road-accurate details on the SP GP35s will include extended dynamic brake hatch; four jacking pads; front plow; tall, can-style air filter/dryer; cab-mounted bell; and a 2,700-gallon fuel tank.

The new GP35 Phase II currently shows a February 28, 2017, arrival to hobby dealers. The model standard DC set up carries a $199.98 suggested retail price. Proto GP35s with DCC and sound retail for $299.98. Watch Model Railroad News for updates on this project and a review of the first releases in the coming months.