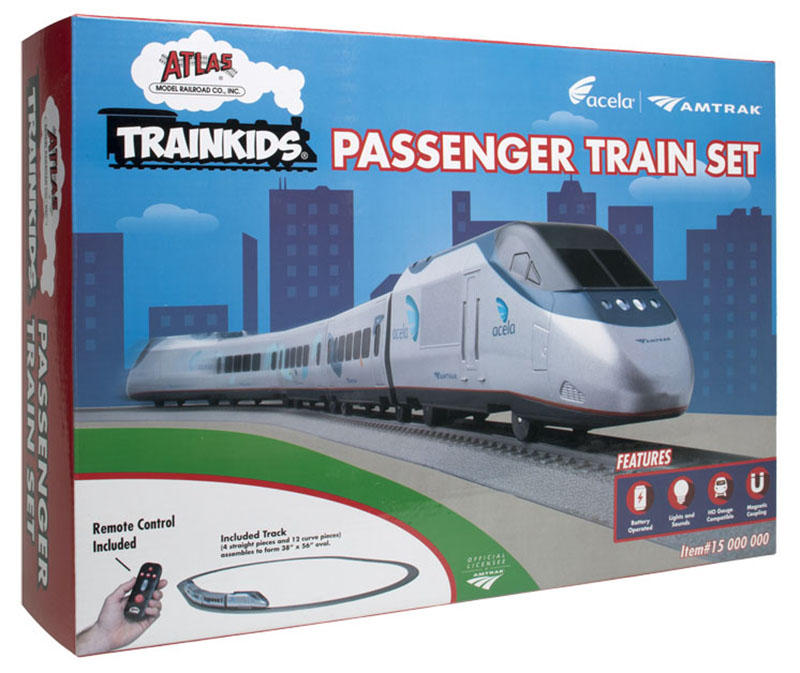 Atlas Trainkids line Amtrak Acela is a toy train set that operates on batteries, connects together via interior magnets, and runs on HO-scale plastic roadbed track. Your young engineer can run this Atlas Trainkids equipment on its own included track, or operate it on any HO model railroad.

Atlas expands its hobby product catalog with a new “Trainkids” line recommended for ages four and up. The first offerings from Atlas Trainkids present Amtrak’s high-speed Acela passenger train.
Atlas Trainkids’ Passenger Train Set (15 000 000) provides everything a child needs to get set up with their own miniature railroad. The Acela set features toy-like proportions and is designed to operate on its own track; the track is gauged to HO-scale and thus this Atlas Trainkids Acela passenger train set can also operate on regular HO-scale model railroads.

ABOVE: You control the new Atlas Trainkids equipment with a handheld remote control. The battery-powered system provides control of the train’s forward-and-reverse movement, as well as ability to stop the train. The user can control the train’s sound, headlight, horn, bell, and a “Welcome Aboard” announcement from the easy-to-use remote control.

The set includes an Amtrak Acela powered locomotive and First Class car, cafe car, Business Class car, and unpowered locomotive. The powered locomotive and First Class car are permanently connected and include the train’s mechanism and batteries (safely secured from young operators). This miniature Acela train includes forward-and-reverse movement, headlight, horn, bell, and “Welcome Aboard” announcement. Atlas provides its Trainkids set with a handheld remote with simple buttons featuring graphics telling the user what each button does. The set’s consist connects magnetically. The ends of the cars include magnets that simply snap together. 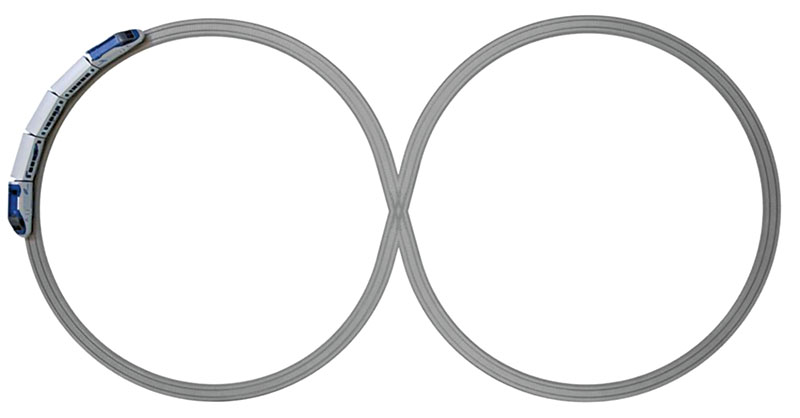 The train operates around a provided loop of plastic track sections. The dozen curved pieces and four straight sections of gray-plastic roadbed track will build a 38 x 56-inch oval layout. The durable track easily snaps together and just as simply disconnects for storage.Separate release items from Atlas include the powered locomotive and First Class car with remote control (15 000 002). A separately sold Acela Business Class Quiet car (15 000 003) allows for expansion of the set’s consist. The add-on car sells for around $10 and the starter set lists for below $100. You can build on the train set’s oval track plan with a Figure 8 Expansion Pack (15 000 001). This Atlas Trainkids track set provides a 30-degree crossing section and four curved track pieces. When you combine this expansion set with the set’s track pieces a Figure 8 can be built for operating your Acela service.