For this holiday season, Bachmann has two HO-scale train sets with contemporary markings featuring unit train consists. The company’s new “Coastliner” (#00734, MSRP: $199) provides an all-CSX decorated train set. Canadian railroading is the subject of Bachmann’s “Harvest Express.” Both offerings include the expected train set contents of track and power pack, and both sets come with a GP40 diesel locomotive.

A Canadian National GP40 heads up the new “Harvest Express” release. This eye-catching offering includes a colorful set of three cylindrical hopper cars. This set has three paint schemes: the silver Government of Canada hopper car with yellow bands on the model’s sides and red wheat logo and lettering; the bright blue hopper lettered in yellow for Alberta Edmonton; and the sharp-looking red with black roof and ends Canada Grain car. 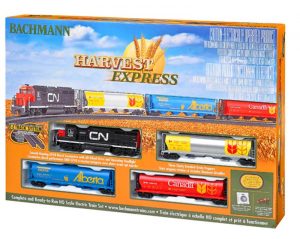 The powered GP40 diesel locomotive model wears Canadian National’s “wet noodle” scheme. The black unit includes a red nose and tail with a white sill stripe that wraps around the front pilots. This model’s paint and lettering include a red background with white lettering labels on the engine access doors on its long hood, as well as a builder’s plate below the cab. Front and rear number boards include the 4009 number, and handrails have white end safety accents. Cab windows feature a black lining to simulate gasket seals on the forward-facing windows; side cab windows are outlined in silver to simulate the sliding panes. This attractive set will capture the imagination and attention of a new model railroad enthusiast.

Bachmann provides a 47×36-inch loop of its popular E-Z Track with this train set. The easy-to-assemble roadbed, ties, and rail sections include steel alloy rails on a plastic base. Bachmann’s E-Z Track catalog includes a big selection of track sections that allow nearendless possibilities for expanding this oval track plan. Power is supplied as a wall-mount unit that plugs into a standard household outlet. The power supply connects via a simple plug in the handheld controller. The controller has an outlet for a plug-in connection to a cable that leads to the track. A screwdriver is not necessary — you’ll have the track snapped together and wires connected in a matter of minutes.

The lightweight controller has a slider bar to handle forward or reverse movement of the train. The unit switches on as the dial is turned clockwise on the controller’s face. Bachmann’s GP40 diesel features all-wheel drive, bodymounted E-Z Mate knuckle couplers, and an operating headlight. This very good-performing diesel won’t disappoint on Christmas morning or in the days after. The trio of hopper cars also features E-Z Mate knuckle couplers. Model Railroad News’ sample arrived with all items present and ready for operation. The coupler height on all cars, as well as the diesel, checked out fine with a Kadee coupler height gauge. The rolling stock includes plastic wheels, which differs from what Bachmann supplies for its regular Silver Series releases of these and other freight cars. 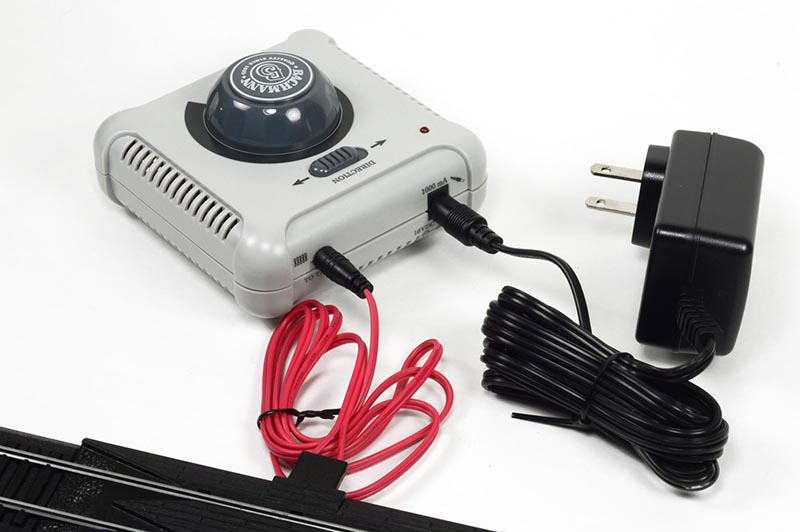 This train set comes in a 23×16-inch box. Wrapped in Christmas paper, this box will certainly spark some questions about its contents. I love train sets and think many seasoned modelers share this affection for starter releases. There’s something very exciting about a box with a railroad inside. This “Harvest Express” and Bachmann’s “Coastliner” sets are especially appealing with their contemporary markings and unit train consists. Seeing the containers roll by on the CSX set or the string of grain hoppers on this review subject’s set can lead to a railfan trip. 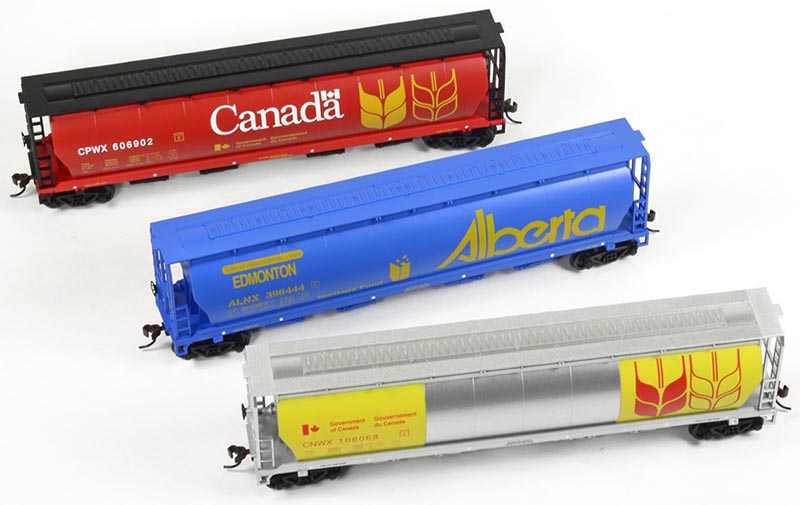 While GP40s may not be on the point of many Class I trains today, the decoration similarity will provide comparisons between this classic second-generation diesel and today’s wide-nose units. Beyond passenger train offerings, these sets may be the first time you could buy a train with a unit-type consist such as these in a Bachmann HO release.