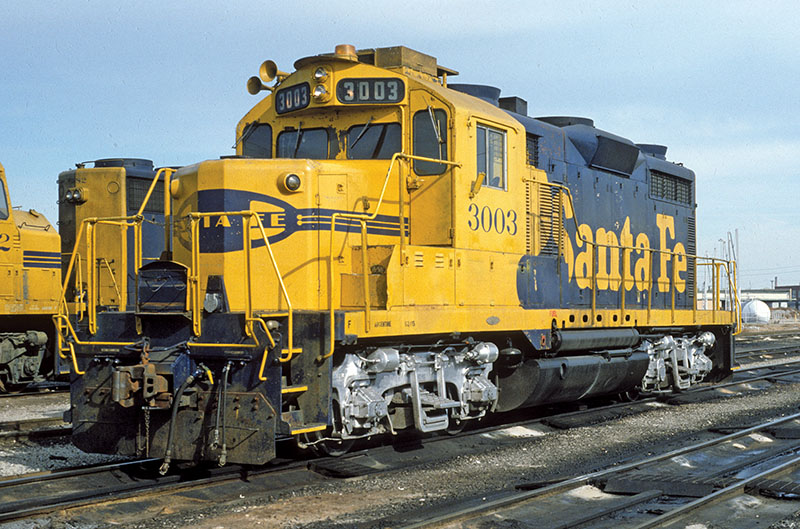 Santa Fe 3003 presents a later era look for the road’s GP20s. The Warbonnet scheme became a freight livery in the early 1970s and the equipment on the roof followed. Compare the prototype with the model above. — G.R. Bole photo, Kevin EuDaly collection

Broadway Limited Imports (BLI) was a pioneer in the industry with respect to offering models with Digital Command Control (DCC) and sound as a standard feature. Over the years, BLI has refined its electronics and introduced new features. The hobby company’s all-new HO-scale GP20 diesel locomotive will arrive with new Paragon 4 electronics.

This new Paragon 4 system advances the line’s offerings and remains compatible with existing DCC and Rolling Thunder equipment. For HO and N scale models, you’ll discover increased capacitance providing enough stored power to keep operation across dead spots on your railroad. The previously introduced GoPack! will be part of the Paragon 4 standard for HO, while N scale will see the addition of capacitor circuitry to increase sustainability across rough conductivity spots three times better than recent offerings. Paragon 4 will also provide a Switcher Mode, which by programming a control variable you’ll find momentum and throttle response adjusted for a more precision low-speed operation for greater realism. There’s also a Pro Mode available for lighting. Similar to BLI’s Switcher Mode, the Pro Mode is programmed via a control variable in DCC and this allows for greater and independent control of lighting features, including headlights (front and rear), cab lights, number boards, and more. BLI notes additional and comprehensive upgrades to its digital electronics are part of Paragon 4 and include suggestions and feedback from users of the company’s past releases. Shipping in early May, Broadway Limited Imports HO-scale GP20 arrives with Paragon 4 DCC and sound ability in eight road names and undecorated. This model will include many road-specific attributes and multiple road numbers for most offerings. Electro-Motive Division’s (EMD) four-axle GP20 was an innovative member of the diesel builder’s early diesel offerings. Developed with Union Pacific, the turbocharged GP20 enjoyed and short but successful production run from 1959 into the early 1960s with examples operating on Class 1 railroads into the 21st century.

The assembled HO-scale GP20 will operate on standard DC layouts thanks to a dual-mode decoder. In addition to new Paragon 4 advancements, the electronics include Back EMF for slow speed operation. The model’s plastic body shell will ride on a die-cast metal chassis. The multi-part shell will possess separate, factory-installed handrails, grab irons, fans, sunshades, antennas, and other details. The model will be equipped with metal knuckle couplers and will operate on 18-inch radius and wider curves.

Watch for additional announcements on Paragon 4-equipped releases in HO and N from Broadway Limited Imports. The company’s all-new SD45 diesel locomotive is expected to be among Paragon 4 releases and due in the future. For more information on BLI’s Paragon 4 system, you can visit the manufacturer’s website and read the full specifications. Watch for a review of this new GP20 in a future edition of Model Railroad News.