According to James L. Windmeier, this group of, “Pacifics was the best steam power the Alton was to own.” Mr. Windmeier’s article, “Chicago & Alton Class I-6 Pacifics” that appeared in the GM&O Historical Society News more than 40 years ago in the group’s Issue 6 from Spring 1976. These flashy 4-6-2 steam locomotives received a special red livery and served on “The Alton Limited,” “Fast Mail,” and “Midnight Special” trains.

These 4-6-2s came to Chicago & Alton in 1913 from Brooks and occupied the road’s I-6 class with road numbers 650-659. Information states the selection of this type of locomotive may have come due Chicago & Alton’s association at the time with Union Pacific. Following a bankruptcy, Chicago & Alton returned to business as The Alton Railroad and these 10 Pacifics became Alton’s P-16s.

Research shows a major rebuilding for the group came during World War II. Alton was under Baltimore & Ohio’s (B&O) control around this time and the road had access to early boxcab and EA diesels from the B&O. Alton reportedly attempted to order diesel power to begin equipping trains on its Chicago-to-St. Louis corridor, but the War Production Board intervened in which railroads received what motive power and Alton had to wait until the conclusion of WWII for its desired new passenger diesels. With diesels on hold, the P-16 class saw major rebuilding in 1943 and 1944.

Handsome decoration and details applied by Broadway Limited make this Paragon 3 HO-scale Pacific 4-6-2 an impressive looking release. In addition to inclusion of maroon and red, the model includes a brass-colored bell, and whitewalls on its wheels, as well as other paint accents.

These Pacifics were rated as being able to maintain the road’s 6-1/2 hour schedule across Illinois with 11 heavyweight passenger cars. Following modernization during WWII, these 4-6-2 could handle 14 passenger cars, make five stops along the way, and deliver trains on time in 5 hours and 50 minutes between Chicago and St. Louis. In 1945, just two years before Alton disappeared into the new Gulf, Mobile & Ohio system, Electro-Motive Division (EMD) E7As arrived. These sleek passenger diesels would be Alton’s only cab units. Other diesels included the mentioned boxcab and EA obtained from B&O and early Alco road switchers. The road was in preparing to order EMD FTs, when GM&O took over in 1947. The frugal GM&O sent some Alco FAs north to cover assignments and no orders for FTs came to EMD. GM&O did order new F-units not long after the aborted Alton FT proposal with F3s joining the roster in late 1946. 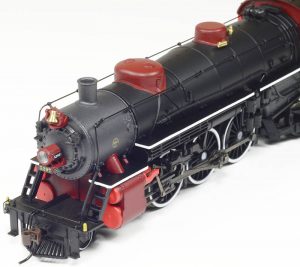 The GM&O did operate and re-letter members of Alton’s P-16 class. These Pacifics had only recently been rehabbed, when E7s arrived after World War II and put them out of their original passenger assignments. Still in good running condition, research shows these 4-6-2 retained their 5200-series numbers and worked various jobs until the scrapping in the late 1940s. GM&O is among the handful of railroads that one hears the claim, “first to dieselize” and these steam locomotives soon were out of work. The 5296 is shown in James L. Windmeier’s article at East St. Louis awaiting scrapping in the late 1940s. There are also at least two images captioned as being shot in Kansas City in 1945 and 1946, showing the P-16s made trips to the GM&O’s far western terminus during the last days.

Broadway Limited’s Rolling Thunder system, featuring as the cover story of March 2016’s Model Railroad News, remedies short coming of sound-equipped model trains. How can you get realistic heavy thumping sounds from a miniature locomotive? For BLI, the answer came by adding the power of an audio sub-woofer. The company’s Paragon 3 releases include electronics that provide Digital Command Control (DCC) and audio output, as you normally receive from a models with digital and sound, with the added ability to work with BLI’s Rolling Thunder unit and transmit data to a unit controlling a sub-woofer that adds the ground-shaking sound and feel closer to what you experience trackside with a real locomotive. 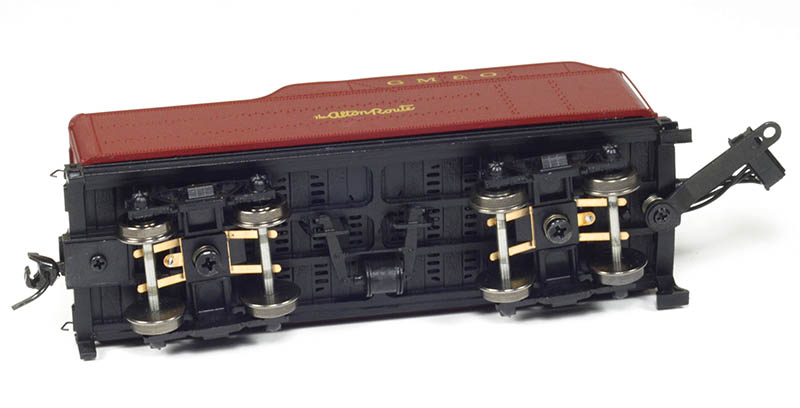 This model comes equipped with metal wheels and metal knuckle couplers. Sound comes from the tender, which includes openings on its underside for audio output. The model comes fully assembled and carries a $349.98 suggested retail price.

This latest production of 4-6-2 Pacific steam locomotives incorporates Rolling Thunder and comes packaged in a handsome black two-piece heavy cardboard box. For those wondering, the model functions like any DCC-sound release otherwise and will work well under regular digital control. Inside, the locomotive and tender appear wrapped in clear film material and rest in individual sections in a thick foam insert. A small clear bag included in this release provides replacement traction tires for the rear driver. A well-written Operator’s Manual for BLI’s Paragon 3 series offerings, an exploded parts diagram, and warranty card make up the printed materials in this HO steam locomotive offering.

For those not familiar, you can spot a Heavy Pacific versus a Light Pacific by the circumference of the boiler. The Heavy Pacific features a bigger boiler compared to its Light Pacific counterpart. This model follows and replicates a USRA-standard prototype. The design is similar in appearance to the GM&O prototype, though not road-accurate and it is not promoted as being such a release. 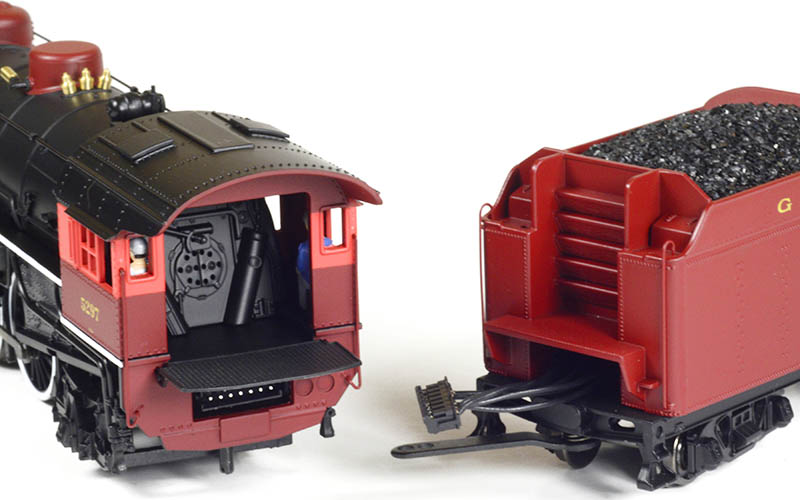 Boiler backhead detail and two crew figures are present in the cab of BLI’s Pacific. The tender includes a drawbar with two settings, allowing for operation on tight curves or for closer coupling on layouts with wide curves, and an electric cable that plugs into the socket below the cab on the locomotive.

Similar to past experiences with Broadway Limited HO-scale steam locomotives, this sample was a silky smooth performer right out of the box. The model weighs in a nearly a pound and has very good pulling power. See the accompanying By-The-Numbers section for specific data details. The sound output is excellent with the fun part being the extra adding thumps and thuds felt from the sub-woofer receiving signals from the model wirelessly, thanks to BLI’s innovative Rolling Thunder Paragon 3 electronics. Similar to other sound-equipped models and outlined for you in the Operator’s Manual, you can control and adjust settings with function keys and control variables as with any other DCC release.

Decoration and performance are standout features of Broadway Limited steam locomotives. This new HO-scale Pacific doesn’t disappoint on either point. The application of maroon and red for the model’s cab and select details on the boiler, as well as the red tender are visually striking compared to the average standard black steam locomotive.

Since the early 1970s and the demise of the Gulf, Mobile & Ohio, the GM&O Historical Society has carried on the memory of the railroad with its GM&OHS News publication and many events and special model releases. You can find out more about the GM&O Historical Society by visiting the organization’s website. Information on the Alton Railroad and GM&O Pacific steam locomotives for this review came from a now-vintage edition of the GM&OHS News from the spring of 1976 (Issue #6).