Review by John Sipple/photos by the author

General Electric built the famous Gas Turbine Electric Locomotives (GTEL), though the first one was built in 1948, actual production began in 1952, and the last was delivered in 1961. The first ten rode on four AAR Type B trucks in an B+B—B+B span-bolster arrangement. They were all done working for the railroad in 1969. The railroad, and especially David Neuhart, UP’s superintendent of motive power, liked the idea of high-horsepower pullers for use in their mountainous terrain following in the footsteps of the 4-8-8-4 Big Boys. With the old turbines headed back to GE for trade-in, they decided to try putting span-bolster trucks under a two-engined behemoth that would be like two U-25s on one frame. What to call it? How about the U-50?

Boasting two 7FDL-16 engines with 2,500 horses each, the eight powered axles sat under a loco that was 83 feet 6.5 inches long. UP ordered 23 of them while Southern Pacific took three in the period from 1963 to 1965. In that same time frame, EMD delivered 30 DD35B, 5000 horsepower, cabless B-units to UP. Then they followed up with fifteen more, only these with cabs. In 1964, Alco delivered their own two-engined monster, the 5,500 horse C-855, two with cabs and one without. From 1969-71, GE presented 40 of the U50Cs, sporting six-wheel single trucks at each end and using a pair of 2,500 hp V-12 engines. EMD finished the process with their Centennial DD40AX 6,600 hp dual-engined machines, one of which survives today in special operations on the UP. 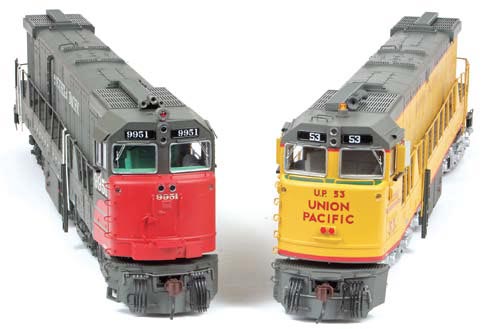 Union Pacific’s enthusiasm for high-horse diesels came from studies by Neuhart, showing maintenance costs were the same regardless of horsepower. Not calculated into that was the cost of losing twice as much horsepower for the Operations Department when one of these machines went down for servicing. It was the aluminum wiring that led to the U50s being pulled from service in under ten years. UP certainly got their money’s worth, but not enough to repeat the experiment, unless you count in the recent 6,000 horse single engine units.

Still, during their tenure at both UP and SP, the U50s were railfan favorites. The rounded, blunt cab front was totally unique, providing excellent visibility and adequate crew protection. The U50s had their radiators at either end of the engine compartment while the U50Cs joined the radiator section in the middle. The U50s weighed in at 275 tons with an axle loading of 68,750 pounds while the U50Cs hit the scales at 208.5 tons for an axle loading of 69,500 pounds.

I should mention the U50 hasn’t been made in HO plastic before. Con-Cor introduced an N-scale version in 1973. There has been a smattering of brass U50 releases in HO scale, beginning with the Trains, Inc. example in 1967. Viewing Athearn’s RTR line, we understand the differences between RTR and Genesis in the HO world. RTR generally means the models have less specific detailing and no decoder electronics installed from the factory. The U50 is a challenging machine to model, since it has some very specific details that must be gotten right. Among various HO diesel locomotives, the U50 is huge, as it was in real life. The prototype had transverse pilots that shifted left and right with the track, being mounted on the end of the span bolster that tied both trucks together on each end. Athearn draws top marks on this, having worked it out with their Gas Turbines, which had the same arrangements. In fact, GE just moved the hardware from one to the next, so Athearn’s just following suit in miniature.

The next thing a railside observer would most likely note would be the radiator intake grilles at each end of the hood, revealing the squirrel-cage fans behind. Athearn bent over backwards to build the whole air management group at each end of the hood. Though the screens aren’t as fine as the prototype, they are much more durable. 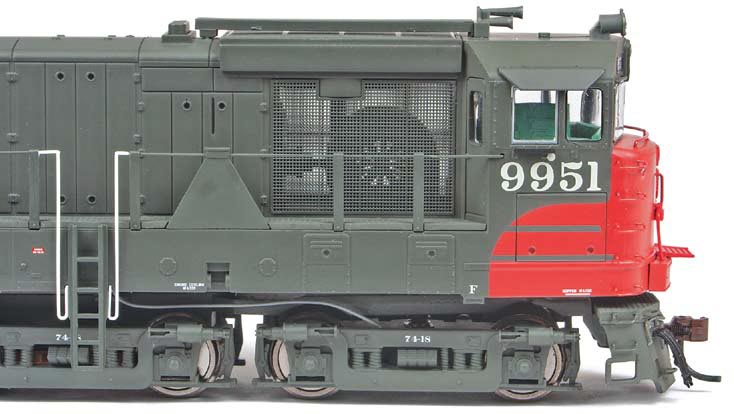 Even in the road-specific department, this model is no slouch. We have both the UP and SP versions to compare, and by golly, they’ve picked up on the principal differences. First, while the UP version had no front nose access at all, requiring the crew to climb to the catwalk on a ladder behind the cab by the #2 truck, SP put their big corporate foot down and had a nose door installed. SP never met a light it didn’t want installed, so they not only had the vertical eyebrow headlights, they added a horizontal nose headlight above the door, and a red emergency light atop the cab roof. The headlights and tail lights are equipped with Edison bulbs; the UDE light on the SP and the yellow beacon on the UP are not illuminated.

Horn placement is also road-specific, as are sunshades and wind-deflector/mirrors. The back of the locos are different too. The SP version had through access for train crews while the UP did not. The walkways were about three feet higher on the UP U50 versus the SP, which Athearn has also duplicated accurately. During their life, there is no evidence that UP ever tried to add access at either end. The SP version’s access let the loco be accessed in any position in a consist. 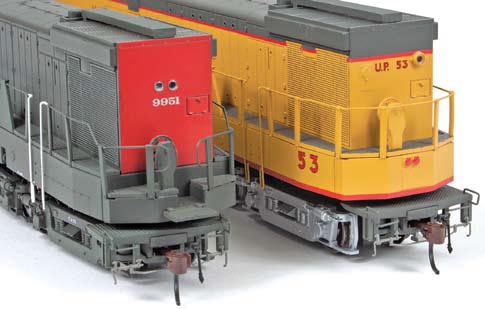 While the windshield wipers are molded and painted on the main windshield panes, this has been done very well and is far better than poorly done separate parts. The railings and handgrabs are well done but also somewhat delicate, but with careful handling, you should have no damage problems. The Type B truck sideframe detail is very good, as is the MU hoses and general pilot appearance.

We have the two main paint samples to study, and it’s all good. The UP “Dependable Transportation” is a very good rendition of Armour Yellow and Harbor Mist Gray, while the SP sample is of their classic scarlet and gray. The paintwork is exquisite, the masking is razor tight, and the lettering is sharp and legible, even if you have to fetch out a magnifier. It’s your choice: Old Yaller or Bloody Nose, but you really can’t go wrong with either one. Could you work them together? I have no evidence that UP and SP ever ran one of each in the same consist, but it’s your railroad. I know I intend to do it!

Inside the model, Athearn has included their famous QuickPlug board which, in addition to the DC dummy plug that comes installed, can also accommodate both 8-pin NMRA and 9-pin JST decoders. Also, inside are mounting sites for two speakers, each up to 1.20 inches in diameter. I know that SoundTraxx makes a couple of different FDL16 sounds, but at the point of this writing, they didn’t have a two-engine version. The same is true for QSI Solutions. Whoever comes up with one needs to be sure one engine loads up differently from the other, like a pair of U25s working in the same consist.

The model powers just the inside truck of each pair, letting the outboard trucks become idlers. I’m not sure we’d want to know what it would cost to have them all powered, and this is the same chassis concept as under the GTELs. As the model comes in the box, it is ready to take out and run without anything more than a careful unpacking.

Operationally speaking, not only is this a long locomotive of over 83 feet, at a scale 16 feet 10 inches extreme height, it is also higher than Plate C. Both UP and SP had created a standardized height on their home rails that generally cleared around 17 feet. This means you should be careful of height clearances on your layout when you first run it. The same is true for side swing of the ends of the main shell on curves. The loco will swing 18-inch radius curves, but outward overhang is worth monitoring. Also be aware that the rear ladder may foul the #4 truck on tighter curves; that’s why their installation is optional.

The model uses McHenry plastic knuckle couplers that are generally compatible and meet the NMRA height standard. The mounting pocket is standard, so if you chose to use a different brand of coupler, all should go well. Since the coupler is part of the pilot and it follows the curves, this is a very reliable mounting. 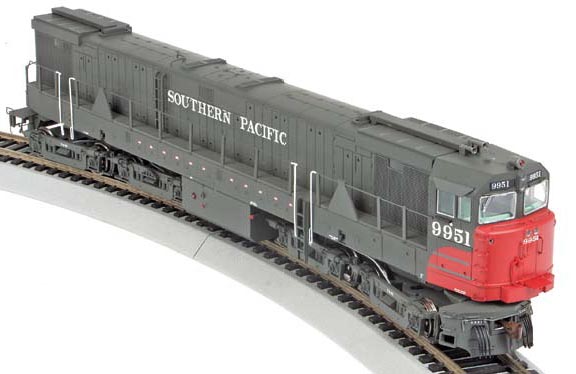 When it comes to pull, we have to face the real U50. It was capable of delivering 160,000 pounds of starting tractive effort with 139,500 pounds of continuous pull at 8.5 miles per hour. This all adds up to more than a pair of U-25Bs working together. So we have some expectations. In all of this, it’s worth noting that while the U50 outpulled the numbers on the Big Boy, the U50C didn’t even out-pull the Challengers.

The first test would be basic speed testing on straight DC power. I tied them both together and set out to have them run a half hour one direction and a half hour the other. Then I ran them a bit with about a foot of separation, and the SP unit was a bit faster than the UP, but not by much. I also gave them each a train to see how they tracked under a load and what sort of car expectation I might have. Then, with both of them run-in a bit, I set them to run the speed traps. Each loco started at around two volts, what DC guys want to hear.

I only equipped one for DCC as of the submission of this review, since I’m considering a sound installation to take advantage of the two speaker mounting pads. However, I turned to the Digitrax DH163 to convert the UP version. I know and like the DH163 and felt the low volt starting speed in DC came back to roost with the decoder starting the loco at around 0.2 scale miles per hour, crawling from tie to tie. It topped out on a Digitrax system putting out 14.3 volts and gave me a top speed of 72 scale m.p.h. I’m sure with a system voltage raised another volt, the U50 would give me more like eighty. The prototype was designed to have a top speed of seventy, so the model’s fine with a top scale speed of 72.

Aside from using Edison bulbs (they haven’t emptied out that container yet), this is one of the most remarkable first releases I’ve seen. For an RTR locomotive, it has very specific detailing per road, and even the inside of the cab is detailed. Seats await your choice of figures. The models arrive in road-specific boxes, securing the model until you unpack it. This is one model you’ll want to start the New Year with. 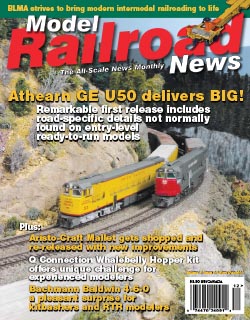