Leaf Green and Gold Mist are two of the three body colors included in the first production of HO-scale 1974 Buick Estate Wagon models. These front and rear view show the classic 1970s styling that served Buick and other General Motors lines.

The station wagon is an iconic example of American automobile. As automakers diversified and expanded product lines in the mid-20th century, this type of vehicle enjoyed a great ride for many years. It was ecilpsed first by the minivan, that rose to popularity in the 1980s, and more recently kept from dealer showrooms by the current king of car types – the sport utility vehicle or SUV and its smaller crossover utility vehicle sibling.

If you grew up in the middle part of the last century, you likely spent time on family outings loaded up in the back of a station wagon. My experience growing up with the family station wagon included a range from small examples, such as Chevy’s Vega and Ford’s Pinto, on to larger models that for my family topped out with Ford’s Gran Torino and Oldsmobile’s Cutlas and Delta 88 wagon editions. Automakers badged these people haulers with names such as “Country Squire,” “Custom Cruiser,” and the classic “Nomad.” I prefer the two-door personal luxury car, another sadly dormant body style today, such as Ford’s Thunderbird or Lincoln’s Mark series; however, the station wagon holds a special second place for its dutiful service taking my family on weekend outings and cross-country trips.

Classic Metal Works has a brand-new tooling station wagon model that I’m sure will appeal to many hobbyists who share those memories that I do. Whether you were the owner and pilot of said vehicle in those days or like me in the back with toys watching the scenery go by and looking for the next train, the station wagon is a great example of Detroit design work and today absent from showroom floors.

Prototype Profile
Buick helped establish General Motors (GM) at the beginning of the 20th century. The brand served GM’s automotive lines near the top, below Cadillac and above other company brands that included Chevrolet, Oldsmobile, and Pontiac. Today, GM’s portfolio includes Cadillac, Buick, and Chevrolet, along with GMC trucks. When you consider the popularity Oldsmobile enjoyed beginning in the mid-1970s, it might be somewhat surprising that out of GM’s brands that Olds didn’t survive and Buick went the way of Pontiac. 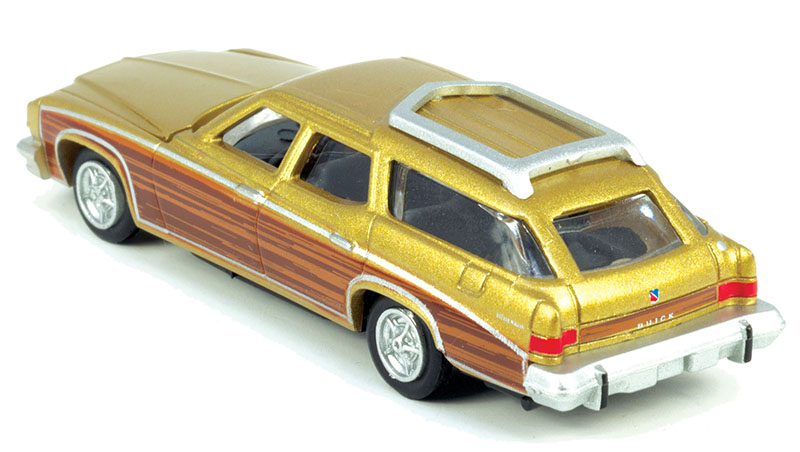 As Cadillac didn’t offer a station wagon, though you’ll fi nd some eye-catching custom builds and service vehicles, Buick’s Estate Wagon was the pinnacle of GM’s station wagon offerings to consumers. Buick’s station wagon models date to the 1940s with the car maturing and evolving into the style and size of Classic Metal Works’ new model during the 1960s (then with 124-inch wheelbase). GM’s B- and C-body served as the platforms for Buick’s Estate Wagon during the early 1970s. The wagon’s styling took its look from Buick’s flagship Electra luxury model, though the wood-sided wagon didn’t share the name. This big Buick station wagon went up against Mercury’s Colony Park and Chrysler’s Town & Country full-size wagon offerings. 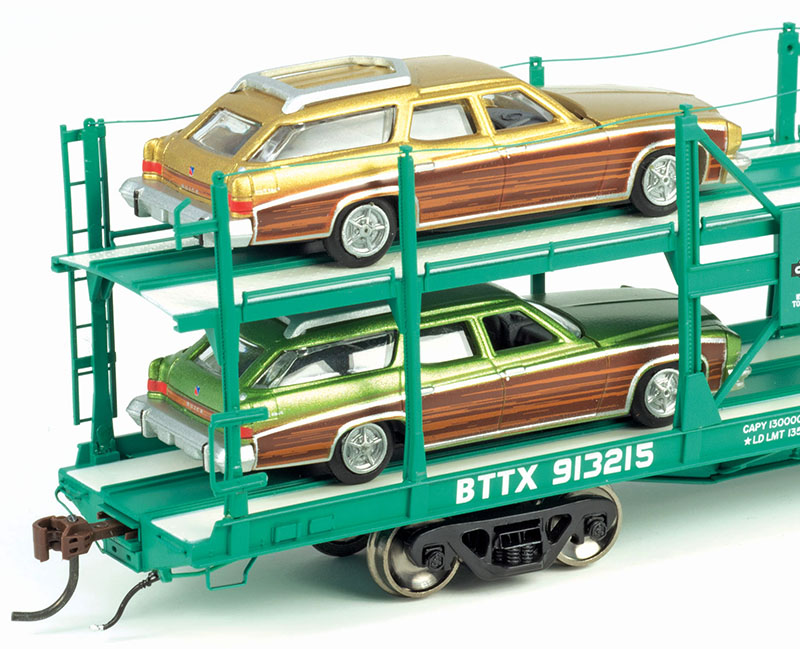 The first half of the 1970s was an amazing time for big autos that are affectionately referred to by many as “land yachts.” In 1971, Buick’s Estate Wagon grew to its largest 127-inch wheelbase and would remain this impossing vessal until GM’s downsizing of 1977.

Perhaps the most important Buick spotting feature was the inclusion of “venti-ports.” These small horizontal vents located on each side of the surface of the hood joined the car line’s styling in 1949. The next and equally important exterior aspect was Buick’s “Sweepspear” trim. This name refers to the side body chrome band that gener-ally began over the front tire and ran back across the doors losing elevation in a sweeping path until it met the rear tire, where the band would whip back up and over the back wheel and on to the rear of the vehicle. For this Estate Wagon, the signature Sweepspear is represented by a chrome-outlined simulated wood panel that starts up at the top corner of the wagon’s side and sweeps back, rolling off to a position in the rear where it meets the lower edge of the taillight.

Though it started the 1970s with an Electra face, for its last two years (1975 and 1976) Buick’s Estate Wagon recieved the similar LeSabre look.
This behemoth left the line after 1976 and the big Buick station wagon for 1977 featured a 116-inch wheelbase, almost a foot shorter. 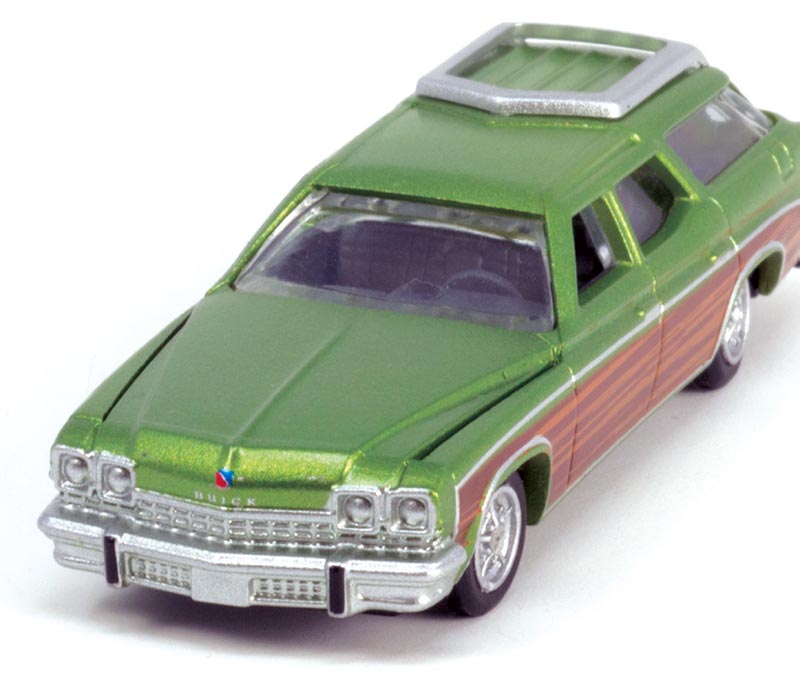 The Estate Wagon in HO
Classic Metal Works, distributed by Round 2, announced its all-new Estate Wagon at the 2019 edition of Trainfest in Milwaukee, Wis. On display were early samples of HO and N toolings for this large four-door station wagon model.

The fi rst production of this HO-scale 1974 Buick Estate Wagon comes in three colors (Burgundy, Gold Mist, and Leaf Green). All three include woodgrain panels on the sides and rear gate. The assembled model, which retails for $16.99, is made up of finely detailed plastic components. As you can see in the picture of a disassembled example, the plastic body has a hood and front end/grille piece that snaps into place and the rear bumper is separate, as is the rooftop luggage rack. Clear plastic window glazing is fitted into the shell, and the underframe holds the model’s interior and wheels.

The plastic underframe includes detail, and two small screws secure the underframe and the body shell together. I was able to easily snap apart the upper section from the underframe, after removal of the two screws. The interior includes a reproduction of the dash with separate steering wheel, along with front bench seating and second row seating. This example includes an open rear area and thus lacks the optional third-row seating feature. The detail on the interior is excellent and thanks to the ease of access and ability to take the vehicle apart, you could enhance the appearance by painting the interior section.

The rubber tires fit on plastic hubs that represent well a spoked alloy wheel design. The tire and hub mount to a thin metal rod that serves as the axle for the model. The model weighs in at a mere 0.2 ounces, so loading up an autorack will not cause tracking issues due to excessive weight.

The model scales out well to its 1974 prototype. The colors offered are authentic Buick options for this Estate Wagon. You’ll fi nd this release available in the traditional red cardboard blister pack with “Mini Metals” brand name prominently appearing on the package face. The trio of colors is also available for N scale (sold in a 2-pack). A version of this Estate Wagon is coming with taxi service detail on its roofline. 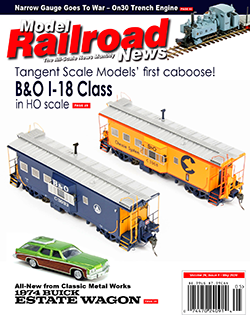 This review appeared in the May 2020 issue of Model Railroad News. Subscribe Today!