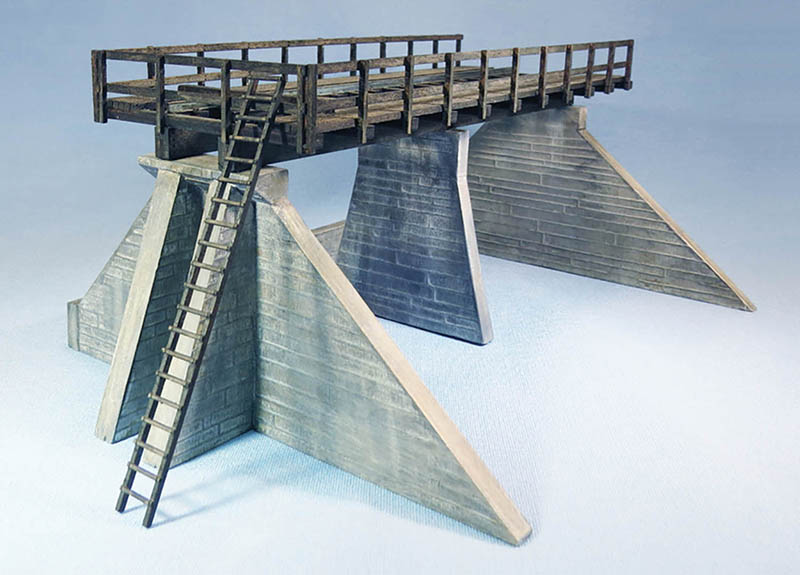 An elevated coal trestle is a common “action accessory” on many toy train layouts, but there are prototypes for those “toys” that did an important job of helping to supply coal for many communities and industries. This excellent kit builds something well above a “toy” that you’ll enjoy having on your railroad. This East West Rail Service photo shows the coal trestle with right-side access.

Review by Michael Ostertag/photos by the author

Up until the end of World War II, coal was used across the United States as the primary source to heat homes and businesses. Numerous large and small towns had a coal dealer, or multiple dealers, that made deliveries when a home’s supply began to run low. In many cases, especially in the East and Midwest, dealers received coal by rail. The railroad required an efficient way to unload coal hoppers at each destination. Often, this task was done by shoving a loaded hopper up a hill and onto a short trestle designed explicitly for unloading coal.

How does a modeler replicate this service on their layout? East West Rail Service’s coal trestle kit in S scale “closely resembles many early private coal trestles found in the United States,” according to the company’s promotional materials. The kit is designed to hold a single, two-bay hopper, but can be enlarged with additional kits, creating a longer trestle. This beautiful laser-cut model is sure to give the novice structure modeler all the confidence they need to build even more wood structures, while at the same time a skilled craftsman could find this kit somewhat challenging.

The kit comes in a sturdy 5×8¾x2-inch box that, once the kit is finished, could be used for storing other modeling items. I was delighted with the way the kit was packaged. I did not find any broken parts and, to my surprise, everything made of wood was labeled apart from the main trestle frame. This thoughtful touch came in very useful, as you will read later in the review. 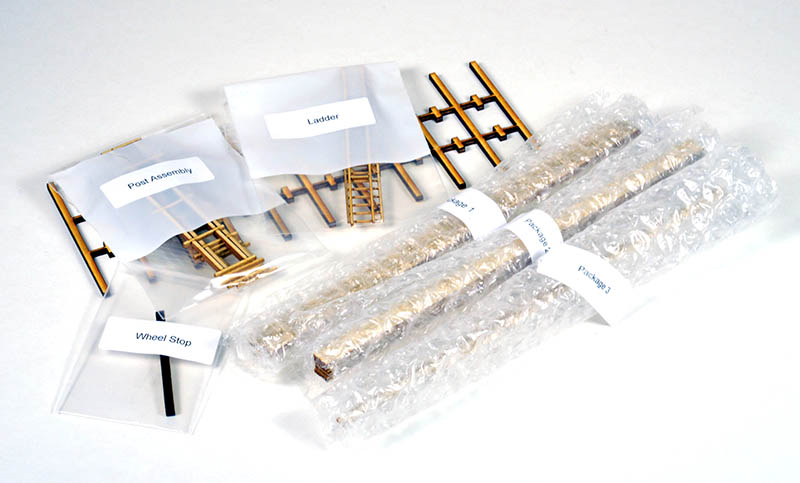 The very well-written and easy-to-understand instructions are found on a standard CD-ROM and are in a PDF file. East West Rail Service does a great job walking you through each step of the modeling process. The instructions have some helpful tips, such as what glues to use, as well as tools you may need to assist you in the construction.

An early step in the construction is gluing the rails to the main trestle frame. I used weathered Code 83 rail from Micro Engineering. However, whatever rail you use, make sure that the bottom of the base of the rail is free of paint or oils and has a smooth finish. I recommend taking a small file or some sandpaper and cleaning the bottom of the rail to ensure a good surface for the adhesive to bond. I applied a thin layer of Mercury Adhesives M5T CA to the trestle frame, as per the instructions, and the frame did not absorb the adhesive, which allowed a strong bond to form between the rail and the wood. 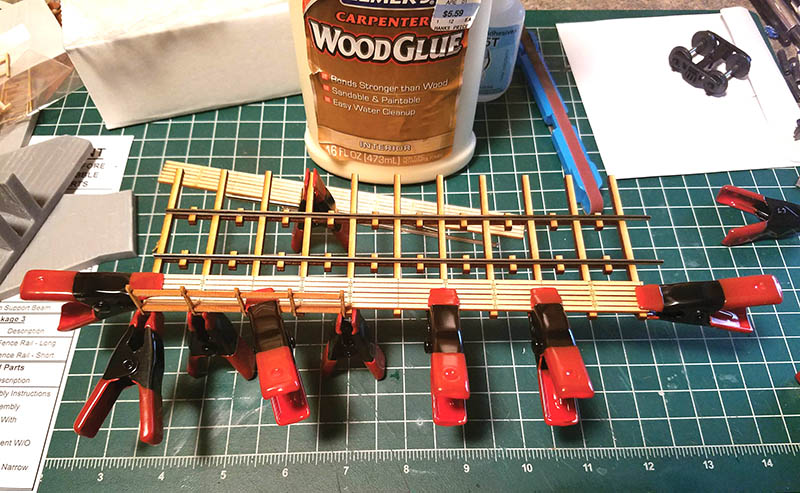 Small, ½-inch spring clamps held the deck onto the main frame during the drying process. I bought these clamps at my local Menards. The clamps came in a set of four that sold for $3.

The deck comes as two separate pieces. I used Elmer’s Wood Glue for the remaining wood portions of the kit. This glue allowed for some adjustments as I went along before it set fully. I found some ½-inch spring clamps to be most useful during this build. The clamps held the deck boards tight to the main frame while the glue dried. The deck boards have simulated bolt holes, giving the illusion that multiple pieces of decking were used.

After the deck is complete, the next step is installing the main support beams. The beams come as six separate pieces (three for each side) and are laminated in groups of three: two with simulated bolt holes and one without this detail. The instructions show exactly how to place the beams on the structure.

The railings are a model onto themselves. They are designed to make it as easy as possible for the modeler to space the vertical posts properly. The vertical posts come in five separate pieces: two for each side and one for the back. Each piece has horizontal sprues that are removed after applying the main railings, allowing the vertical posts to be appropriately spaced for installation on the main frame. The horizontal rails have simulated bolt holes that help the modeler align the horizontal railings with the vertical posts. A word of caution: make sure you keep the railings as flat as possible when gluing them to the post pieces. I, again, used the small clamps, and this created some warpage of the railings. It did work itself out somewhat when I put them on the main frame. In hindsight, I would have done things a bit differently to prevent this from happening. 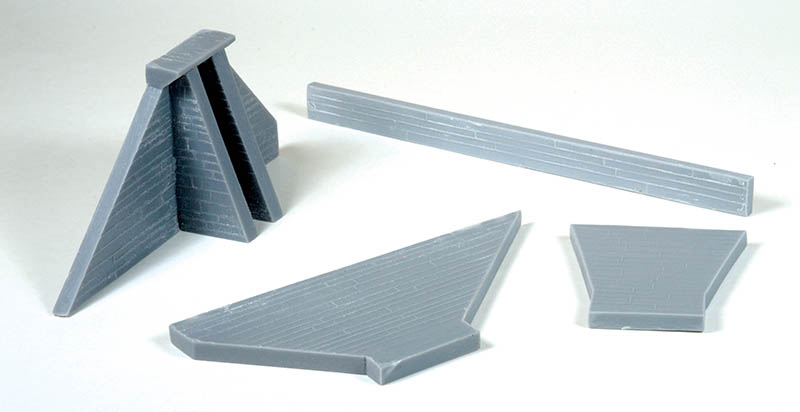 Once the rails were on, the wooden portion of the model is pretty much complete. I took the time “weather” mine before moving onto the abutments. I used a simple wash of India Ink and rubbing alcohol (one ounce of 70 percent rubbing alcohol mixed with six to seven drops of India Ink). I put two coats of this mixture on, which created a nice, weathered surface, aging the wood slightly while not making it too dark.

The abutments are very nice resin castings that have a poured concrete or block design molded into them. A little filing was needed to ensure the surfaces that came in contact with the main deck would be square. Otherwise, they required just some clean up with soap and water to be ready for paint. I used a can of Rust-Oleum Painters Touch 2X paint & primer in a stone-gray color with a satin finish, which applied a nice cement color to the abutments. Once dry, I used some PanPastel Artist Pastels (Black, Raw Umber Dark, Burnt Sienna Shade, and Raw Umber Tint) to give the abutments a weathered appearance. I sealed them with Testors Dullcote. The abutments were then connected to the main deck using a clear adhesive, as recommended. I used Gorilla Glue clear formula. Be very careful if you use this — a little goes a long way. 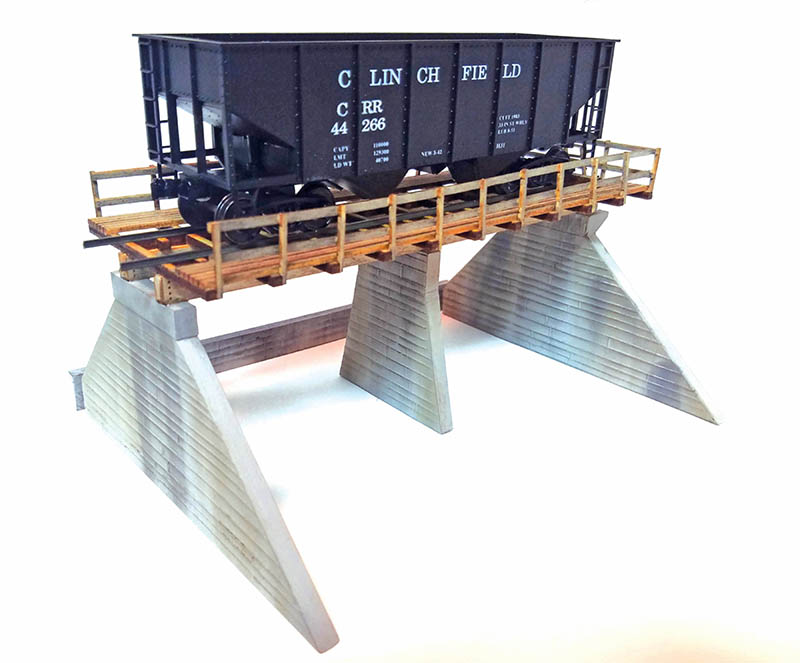 American Models makes an excellent S-scale plastic two-bay hopper car model that is ideal for use with this coal trestle. American Models’ collection of S-scale rolling stock includes an assortment of car types. For hopper car models, the company makes an offset-side, two-bay example, as well as an offset-side, three-bay and a bigger rib-side, four-bay model. More than a dozen road names are available for this fully assembled S-scale hopper that sells for $39.95. You can purchase this and other American Models S-scale rolling stock with scale or hi-rail wheelsets.

The model is now complete. I used an American Models S-scale two-bay hopper in Clinchfield Railroad paint to get some idea of proportions for a future scene where I am going to be using this trestle.

I found East West Rail Services’ S-scale coal trestle to be an enjoyable build that was simple yet challenging. I had minimal sanding to do on the wood parts (mainly after cutting the sprues from the railing posts). Otherwise, the parts fit together very nicely, which made for a very smooth build. One word of caution though with this kit. It is offered as a left or right approach. Before ordering, make sure you know which way this will be positioned on the layout because the abutments are designed differently depending on the approach. Whether you are a beginner or a seasoned modeler, I highly recommend this kit. It will make for a great conversation piece on any layout.

This is Michael Ostertag’s first review for Model Railroad News. Mike lives in Green Bay, Wisconsin, with his wife and two kids. Mike splits his enjoyment of railroads between his passion for S scale and operating 1:1 scale trains for Canadian National. 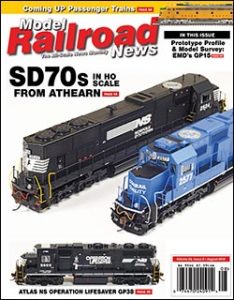 This review appeared in the August 2018 issue of Model Railroad News!