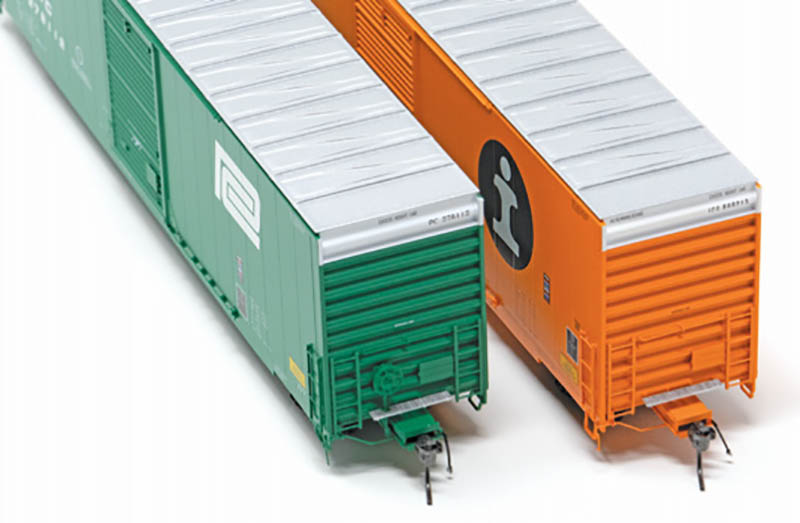 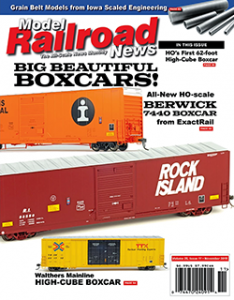 While the 62-foot boxcar was uncommon for many years as a plastic model, the HO market is well served today by many examples. A new addition from ExactRail reproduces a 62-foot Berwick example that is now available as a Platinum-series offering.

High Cube – Low Density
While this type of boxcar is visually big with its excess height and more than 60-foot length, what rode inside the car wasn’t exceptionally heavy. In David G. Casdorph’s October 1989 Railroad Model Craftsman article, “Sixty-foot Appliance Cars,” the author explains the development of this type of specialized freight car and what it was designed to haul. As the article’s title states, home appliances were common uses for these 62-foot boxcars. The bigger boxcars first became common in the early 1960s and saw use in transporting vehicle components. These items, such as auto frames, were large but didn’t necessarily weigh a great deal. A car was needed that was bigger and taller, but wasn’t handling a tremendously heavy load, and thus could be 62 feet long without being too heavy. 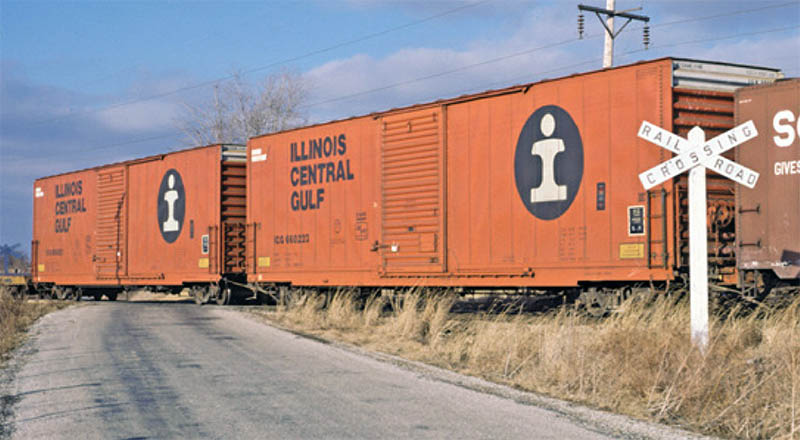 Early examples received Plate C and Plate E clearance labeling. By the mid-1960s, high-cube boxcars with Plate F classification began seeing use. These boxcars included cushion underframes and interior load divider appliances that served to protect cargo during shipment. Examples of this type of XL-classified boxcar include rib-side and smooth-side exteriors with large 10-foot sliding doors. Many different types exist that all generally match up to the description presented for this type of car. For example, you’ll fi nd cars of similar capacity and overall design constructed by Gunderson, International Car Co., Pacific Car & Foundry, Pullman-Standard, and railroad shops that included Santa Fe and Union Pacific.

Near the conclusion of Casdorph’s 1989 article he stated, “unfortunately, there are no readily available models of anything even close to the 60-foot appliance cars.” Three decades later, hobbyists have an amazingly varied selection that now includes this excellent ExactRail Berwick 7440 high-cube boxcar model.

Rock Island 32556 went into service in 1973 and had survived its owner by more than six years when this worn example was documented in the Chicago area in late 1986. —Dick Kuelbs photo, Kevin EuDaly collection

For its HO-scale plastic replica of this boxcar (the manufacturer did not offer an N-scale version), ExactRail’s approach provides a multipart design with many separate parts. I’m always curious about what makes up a model and how it goes together; with many fully assembled releases, it can be a bit challenging figuring out the pieces, parts, and overall design. I picked up an undecorated kit version of this impressive Berwick 7440 boxcar at the St. Louis Railroad Prototype Modelers meet. Obviously a positive for modelers desiring to produce their own decoration, an undecorated model is also a fun and often uncommon example for the collector. As is somewhat common for contemporary models of this variety, this kit version comes with no instructions. If you pursue a build, I would recommend the purchase of a ready-to-run car for reference, or at least very closely examining images of the model, before proceeding with a construction project.

The shell includes a detailed underframe with the sides and ends as part of this single piece. I was surprised the 10-foot sliding door was not a separate feature. The door is well detailed with lower corner gussets on the sides and a Pullman-Standard style pattern of horizontal bars divided into four sections making up the exterior face of the door. The kit provides multiple detail pieces that fit into pre-drilled openings on the door. The upper track is molded on this boxcar, while the lower track that the door slides along is a separately applied feature. The short side ladders and stirrup steps associated with them are finely scaled separate details. The end details include separate ladders with thin horizontal handrails (made of wire with very small plastic details that hold the handrail to the boxcar’s end) between them, crossover platform over the coupler, tack boards on each end, and brake control equipment.

The underbody includes a separate section making up the center beam and floor braces. This piece includes the kingpin to rest the trucks with the provided screw mounting into the boxcar shell’s floor. The two-piece plastic coupler pockets provide a detailed reproduction of the extended cushion look of the prototype. The coupler pocket includes a screw to hold the two sections together with another screw used for mounting to the body. On the samples examined, coupler height matched up well with Kadee’s HO Insulated Multi-Purpose Coupler Height Gauge (No. 206, MSRP: $6.50).

ExactRail’s trainline air hose is made of plastic and smartly the delicate coupler cut lever detail is wire for durability. The expected underframe brake details are provided in molded plastic for installing on the car’s underside.

As mentioned in the prototype information, though this is a big boxcar, it handled low-density loads and was not a 100-ton freight car. The model rides on 33-inch metal wheels mounted into great-looking 70-ton Barber S-2 truck sideframes.

The boxcar body measures 62 feet and takes up approximately 68 feet, when you take into consideration the extended couplers and measuring out over the coupler faces. ExactRail’s Berwick 7440 stands approximately 16 feet over railheads and is 10 feet wide. The assembled model weighs a bit more than 5 ounces, which puts it in agreement with National Model Railroad Association’s Recommended Practices for a freight car of this length…

Read the rest of this review in the November 2019 issue of Model Railroad News!