Lionel’s 2019 announcements for its expanded line of HO-scale items naturally caught this collector’s attention. Following the debut of the company’s HO-scale “Polar Express” train set of several years ago, there was talk of several projects in the works at Lionel. The company shared an early look at a Conrail business car model with a working camera system that is planned for HO release, Lionel developed its own roadbed track system (which has been available for about a year), and the manufacturer has an agreement to produce models utilizing toolings from several past lines. That agreement gained Lionel access to toolings with heritage in Mantua and Model Power lines. The collection of Model Power items includes offerings that appear to have roots back to Marx’s efforts in HO around 1960. This is quite a mix and a lot of variety for this famous train maker. However, due to several factors the delivery on many of these HO offerings has been slow. I pre-ordered these two Lionel HO sets and several other items from that mid-2019 announcement with TrainWorld of New York (trainworld.com). I received Lionel’s HO-scale 2019 Christmas Boxcar (122519) appropriately on December 24, 2019. My expectation was the sets and additional rolling stock would soon follow. Fast forward to October 2020 and my next Lionel HO items arrived. Just in time to make this December 2020 issue of Model Railroad News, I’m unpacking two train sets that we’ll examine for this review. 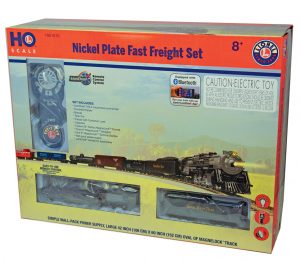 Lionel listed a trio of sets in 2019 that presented variations on its HO-scale 2-8-4 Berkshire steam locomotive model. This is the third round of releases to feature this model, which is new tooling unique to 21st century Lionel. The model debuted with the mentioned “Polar Express” set and returned with revised decoration, along with matching new liveries for Lionel’s heavyweight passenger car models (created for “Polar Express” sets). What distances these latest train sets from recent Berkshire-equipped offerings is what’s rolling behind the locomotive.
The freight cars included in this “Nickel Plate Fast Freight Set”present a mix of rolling stock with Model Power (Marx) heritage. Though some of the toolings are vintage, Lionel has provided them with substantial enhancements over any versions you may remember. For example, these assembled cars come with metal wheels mounted in plastic friction-style truck sideframes with coupler pockets attached that include metal knuckle couplers. The coupler appears similar in size to the industry-standard Kadee No. 5 knuckle.

All equipment in this set features Nickel Plate Road (NKP) markings, which is what attracted me to this release. I’ve always been a bit of an NKP fan and this set’s consist of all-NKP rolling stock, matched with Lionel’s 2-8-4 Berkshire carrying the famous 765 road number,m had me quickly reserving this set for my collection. I’m spotting the covered hopper, boxcar, and tank car in this set as dating to Marx’s line. Model Power had been offering many items from that collection of toolings since at least the 1990s. The set’s 50-foot flatcar with two containers and caboose are toolings that I credit as originating with Model Power (though the flatcar and possibly containers may have heritage beyond this company). The caboose reproduces a Pennsylvania Railroad prototype of the road’s wood-side N6-A class cabin car and saw introduction from Model Power around 1980. This was among the more unique and interesting models Model Power offered in its line of plastic HO rolling stock.

In addition to the improvements I noted, the decoration makes these basic rolling stock models look more impressive than you might expect. Lettering was crisp and sharp and the paint application and finish gave all items in this set a quality appearance. The rolling stock weighed between 2.5 and 4 ounces, which made them good tracking cars. The models are certainly durable with few separate parts, beyond brake wheels. The tank car may possess the most pieces with the tank residing on a plastic frame with ladders on both sides for access to the dome; a wire handrail circles the tank. With respect to all-important play value, the doors slide open on the 40-foot boxcar. I expected the blue containers to be removable from the flatcar; however, my gentle attempts at dislodging them have me believing otherwise and I let them be.

This NKP set provides samples of most of the freight cars joining Lionel’s catalog (as both components in train sets and individual car offerings). The two freight cars that are new to the line and not included are a two-bay hopper (this set’s covered hopper shares that tooling) and a flatcar with water tank loads. This flatcar is shorter than the 50-foot flatcar in this set and originally appeared in Marx’s line and later Model Power. Pricing on Lionel’s separate sale rolling stock is attractive with these ready-to-run HO cars listing for $19.99–$22.99. Check Lionel’s website for a listing and images of road names coming for these freight car models.

Above: Lionel’s 2-8-4 Berkshire steam locomotive decorated for NKP 765 is a highlight and the power for the recent HO-scale Nickel Plate Fast Freight set.

The set include the manufacturer’s LionChief remote control system and Magnelock track sections, and this set gave me the opportunity to try Lionel’s Magnelock track system. When first announced, I wondered how well it would work and perform. The design follows the standard roadbed track section with a molded plastic base and rails mounted to the surface. Like other roadbed track sections, Lionel enhances the appearance of gray plastic with a bumpy texture reproducing ballast. The ties are painted dark brown and feature excellent wood grain texture. The rails are nickel silver and Code 83 height. Lionel’s Magnelock track is a great looking right of way! The sections effortlessly connect via magnets hidden away in the ends of each section. There are no sharp rail joiners to slid under rails and no plastic connectors in the roadbed base to snap together or worry about breaking. On any flat surface, I found you could simply place the sections down near each other and they connected and were ready to use. Power is supplied by the provided wall-mount unit and it includes a cable that plugs into the Magnelock track section with a port.
Lionel wisely widened the general train set tight-radius standard from 18 inches to 20 inches for its Magnelock curve sections. The sets include a dozen curves and four straights allowing for a 42 by 60-inch oval layout. One straight section serves as a terminal for connection to the provided power supply. The Magnelock track can easily be assembled and disassembled (the set box includes two inner sections for storing all the contents of these releases). If you’re looking for a permanent layout, two holes are included in the roadbed of each section that would allow for basic securing of the track to the layout surface. Though it is a recent entry in the roadbed track world, Lionel does offer separately sold Magnelock track sections in additional lengths and information from the company is that more selections will be coming in the future. The battery-operated LionChief remote has been part of the company’s sets for several years and is a great unit. Once batteries are installed and you toggle the switch on the side of the remote to “on,” you’re ready to operate trains. There’s no wiring connecting the LionChief unit. In addition, you can download Lionel’s LionChief app and run these sets via a smart device with Bluetooth connection. The provided manual walks the owner easily through the set process and preps the user for operation with illustration instructions. 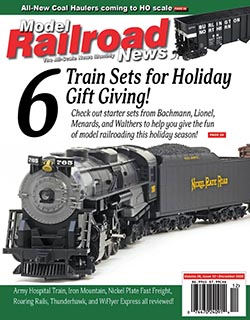