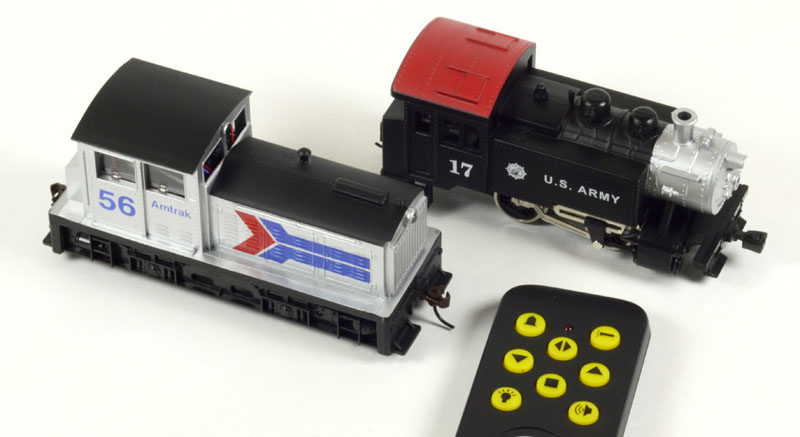 The buyer of this new offering receives an HO-scale Model Power locomotive and MRC’s Loco Genie control ler in one package for $109.98. These new DCC and sound models will operate on DC or DCC systems. You also have the ability of wireless control provided by MRC’s Loco Genie. 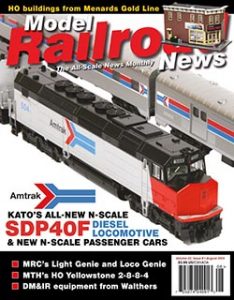 By Tony Cook/photos by the author

MRC’s efforts to make lighted features along the model railroad right-ofway more easily controlled came first. The company’s Light Genie provides the operator with a variety of options to run illumination and animated accessories on a layout. Look for a review of Light Genie to appear in the near future in the pages of Model Railroad News. Once the installation and set-up for Light Genie are complete, the operator can turn on/off and apply desired control to various lights and accessories. MRC applies this same premise to motive power now with these first Loco Genie products.

Powerful Genie in a Small Bottle

Inside the Model Power box, you’ ll find what appears to be a typical locomotive. Also included is a small eight button handheld controller and an A23-12 battery. The initial offerings provide Model Power’s 0-4-0 tank switcher steam locomotive or DDT Plymouth industrial diesel switcher locomotive. A variety of road names is available, and either release sells for $109.98. For this review, Model Railroad News examined the 0-4-0 steam locomotive lettered for the U.S. Army and the diesel switcher decorated for Amtrak. These basic models come with few separately applied details. Paint and lettering were good on both samples, and each demonstrated the ability to execute operation without issue. 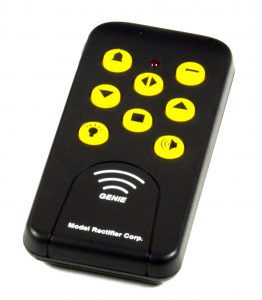 Included in the box is a good amount of literature. You’ll find a Model Power sheet presenting an exploded parts diagram with parts listing, as well as lubrication information. Also included among the printed materials is a one-year warranty, plus MRC’s HO Universal DC/DCC Sound Decoder guide and MRC’s Loco Genie guide. With respect to operation, the latter two items are most important.

The newsworthy part of these efforts is the handheld Loco Genie remote and the electronics inside these models. Start your operation of this model by reading the Loco Genie guide. It is always a good idea to review provided guides and instructions with any contemporary locomotive release — especially true for products possessing unfamiliar features. MRC’s Loco Genie document is a two-page guide that lays out the basics for understanding and operating the company’s wireless control system.

The biggest benefit for the user is to operate one of these Loco Genie equipped locomotive models on a standard DC-powered layout. DCC is not a requirement to enjoy the control from MRC’s Loco Genie. If you do have a DCC system, these locomotives are ready to work with your existing digital throttle. 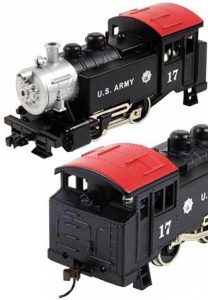 To operate on a standard DC-powered pike, you put the locomotive model on your track with your throttle power at zero. You’ll need an A23-12 battery to install in the handheld Genie controller. You’ll find one supplied inside the outer cardboard box located under the white vacuum-form tray in which the locomotive model and controller reside. This may appear to be a somewhat uncommon battery, but this small 12- volt example is available from most any vendor with a good battery selection. I found Energizer two-packs for around $5 on Amazon.

The locomotive and transmitter need to bond or sync up initially for the desired operation to work. With the locomotive ready on your track, put the battery in the compartment on the back of the Genie controller. The back of MRC’s small black Genie remote includes a panel that slips off, exposing the battery compartment. The unit is clearly labeled telling which way to orient the positive and negative ends of the battery. MRC notes that the user should repeat this battery insertion procedure each time you begin an operating session with a Loco Genie remote-controlled locomotive.

Once the linking between the Genie remote and the locomotive is working, you’ll notice the small red LED light located near the top center of the face of the remote will blink or flash. Next, raise the power on your power pack to between 50 and 70 percent, and wait for the f lashing LED to go out. You can test your connection between the locomotive and the Genie remote by depressing the horn button. The horn is one of eight yellow buttons with black printed graphics on the face of the Genie remote. The horn is located in the lower right corner of the Genie unit. 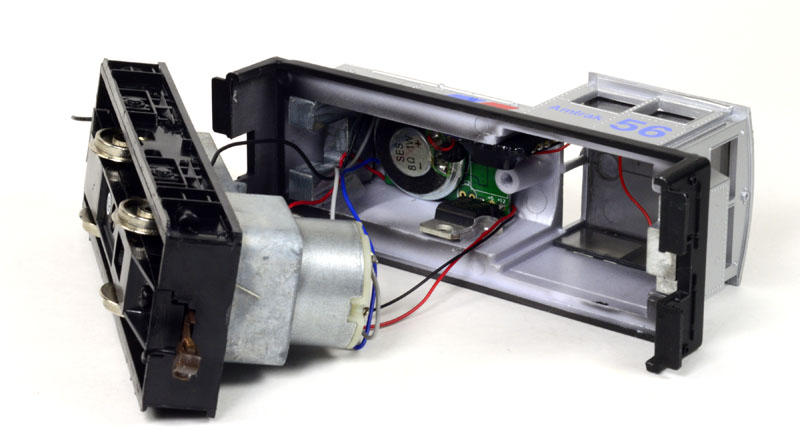 This HO diesel switcher includes working body-mounted knuckle couplers on each, front headlight, and clear window material in the cab. A wide variety of road names is available for this diesel switcher in both standard DC version and with Loco Genie DCC and sound.

Control functions on the Genie remote go beyond the ability to honk the horn or ring the bell. You also possess speed and direction control on this remote. You’ll see the direction control is just below the red LED light and presented by a pair of arrows placed back-to-back on the yellow button. You apply speed in increments by tapping the up or down arrow buttons located on the outer columns of the remote. Holding down the speed arrow button will not continuously apply additional throttle or more momentum. Again, you need to tap the speed arrows repeatedly in intervals to increase/ decrease the rate of speed. This took me a little bit to get used to doing — I tended to hold down the speed button to open the throttle, and this runs counter to its programming.

Other features include the ability to toggle lights on/off, as well as turn on/ off the bell and apply the horn or whistle. There is also a mute control in the lower right corner of the Genie unit’s yellow collection of buttons. Pressing this button will toggle the locomotive’s sound on and off. 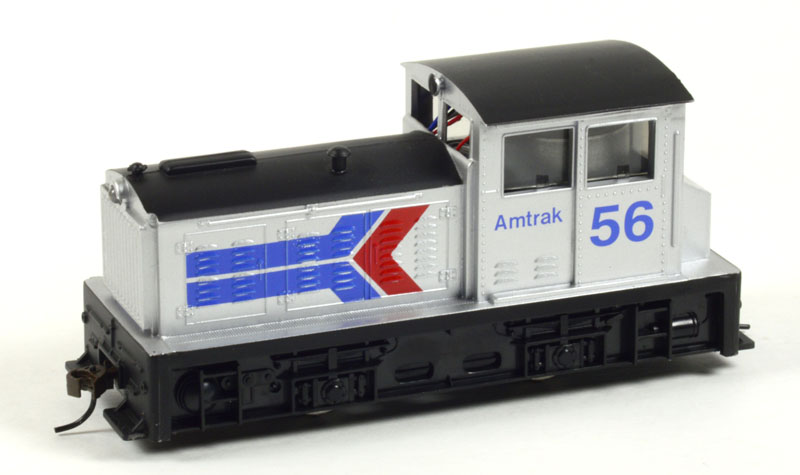 This small model’s modest interior houses its drive, digital control and sound system, and ample weight to allow for good pulling characteristics. You’ll find these Model Power HO scale locomotives priced around or below their $109.98 retail from many hobby dealers.

I found MRC’s Loco Genie remote a good fit for the palm of my hand; operation of the buttons was smooth and easy. Installing the battery each time to link or bond the locomotive with the remote seems a bit cumbersome, but not a deal-breaker to one’s enjoyment of this system. My large test loop occupies a room smaller than MRC’s advertised 50-foot range for its Loco Genie remote unit, so I did not expect any signal issues. I did not encounter any problems from my attempts to put the locomotives through their paces from anywhere in the room. I would expect that you‘d have no signal coverage troubles with this system if operating in a typical train room.

For DCC users, you’ll find that your current throttle will make these locomotive models behave as you’d expect under digital control. The usual keys will produce predictable results. For example, F1 will launch the ringing of the bell, and F2 will fire off the horn or whistle. While many of the function keys will do what you are accustom to with respect to handling of the model’s operation and light/sound effects, you can consult the provided MRC Universal DC/DCC Sound Decoder guide for specifics. For example, I am used to finding the mute on F8 and discovered this unit programs that function at F12. The Loco Genie remote does not provide control and will not link up with a locomotive model on a DCC system.

In addition to these Loco Genie equipped Model Power locomotive model releases, MRC is preparing to offer its Loco Genie system for installation in a range of popular modeling scales locomotives. Similar to a DCC and sound install project, which this Loco Genie unit virtually is, you buy the desired Loco Genie unit and put it into your model, and you can have this control on a basically any DCCready release. Check MRC’s website for the latest information on separate sale Loco Genie offerings.

As this edition went to press, MRC listed new Loco Genie items on its website but had not yet delivered them. Examples coming include a Loco Genie Universal Diesel Sound release reproducing Electro-Motive Division’s 645, as well as General Electric’s 7FDL-12 prime movers for diesel audio. MRC lists steam locomotive sound on its website for Loco Genie units. It appears a non-sound Loco Genie controller with four functions will also arrive in this category. This basic non-sound Loco Genie, available for specific scales with HO and N listed now, carry a $39.98 price for the transmitter and remote sets.

As technology advances, many in the hobby find frustrations with or feel they need to make decisions regarding established DC-wired layouts. Do you change to DCC? What are the avenues that you could take? MRC’s Loco Genie provides an option for those wishing they had some of the sound and effects available with DCC, plus remote control operation.