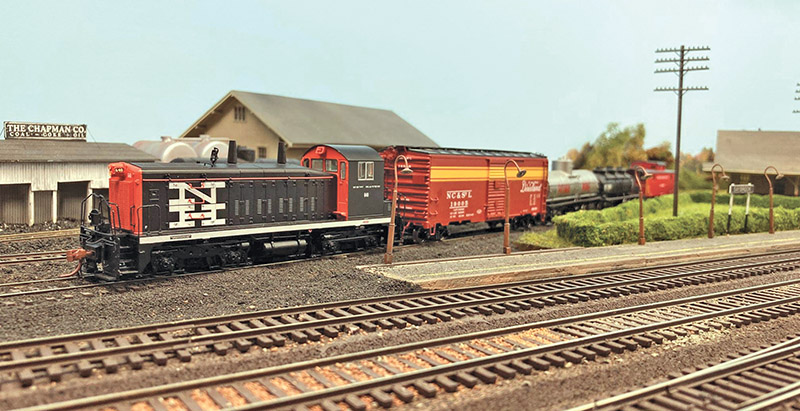 This is a classic scene with a switcher performing the job most frequently thought of when this type of diesel locomotive comes to mind. Rapido Trains’ SW1200 has a local freight passing through Old Saybrook on my model railroad.

Those of us who have been in the hobby for a while may remember an old Atlas planning book called Blueprints for Snap-Track HO Layouts. That was my first model railroad book and “The Way-Freight Special” plan included a silhouette of a local freight train with just a few assorted freight cars, a caboose, and an end-cab Electro-Motive Division (EMD) diesel switcher on the point. For some reason, I found that image of the way-freight inspirational, but what made it really special was that little locomotive on the front. I’ve had a fondness for end-cab switchers ever since, and my chosen prototype and era — New Haven Railroad’s (NH) Connecticut Valley Line in the late 1940s — features them prominently, in the form of Alco S-1s and S-2s. Unfortunately, New Haven didn’t get its first end-cab EMD until the mid-1950s, but Rapido’s latest offering is forcing me to seriously consider moving my era up a bit.

Prototype Information
Based on its use of Alco switchers starting in 1931, and its success with Alco DL109s in dual service during World War II, New Haven was an early proponent of total dieselization, and its overwhelming manufacturer of choice was Alco. That changed with the coming of the 1950s and a brief flirtation with Fairbanks-Morse and Lima-Hamilton. But it wasn’t until the coming of the McGinnis administration that New Haven received its first EMD locomotives in the form of the diesel builder’s SW1200 in early 1956.

Patrick McGinnis and his Chief Mechanical Officer, H. Edward Hales, envisioned a rapid dieselization program which would rid the railroad of electric power just as it had shed its steam power. The initial plan was for an all-EMD fleet of 60 SW1200s, 120 dual-service GP9s, and 88 dual-mode FL9s. Unfortunately, given New Haven’s financial condition, this vision was only partly realized, with just a fraction of this order fulfilled. In addition to an eventual 30 Geeps and 60 FL9s, only 20 SW1200s were ordered during the summer of 1955, and they arrived in two batches of 10 units each during the following January and February, just before McGinnis left to become president of Boston & Maine.

In addition to being the first EMDs on the property, they were also the first locomotives to be delivered in the bold, new Herbert Matter-designed paint scheme. Interestingly though, these engines were never actually owned by the railroad — merely leased from EMD. Given how they were optioned, New Haven’s SW1200s saw service not only switching in the yards and on work trains, but on local freights (and even a few through freights) all over the system. They were reliable runners, and all made it through the Penn Central years and into Conrail. The first unit wasn’t retired until 1985 and all the remaining units were retired within the following 10 years. 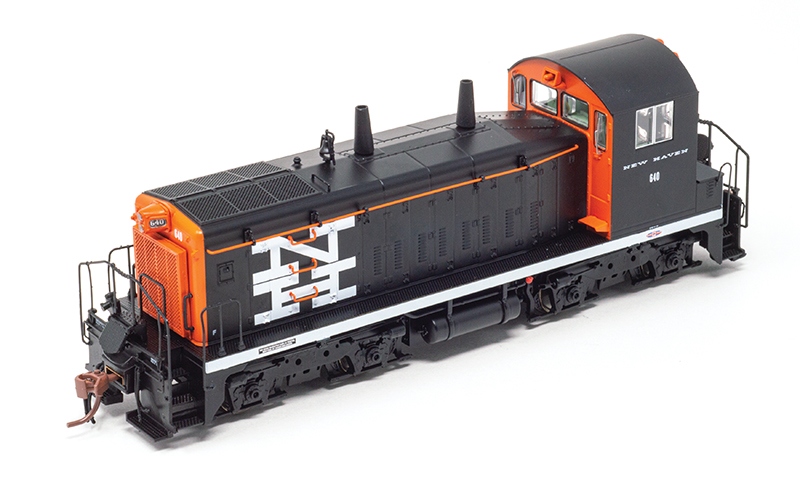 ABOVE: Rapido Trains produced three road numbers (640, 648, and 654) for its New Haven version HO-scale SW1200 diesel switcher model. The railroad had plans to operate a fleet of 60 units, but financial conditions kept the roster at 20 examples. Rapido Trains offers its HO SW1200 in DC-silent version and with DCC and sound installed.

The Model
Rapido has earned a well-deserved reputation for highly detailed, smooth-running locomotives and the company’s model of New Haven’s SW1200 is yet another example of the excellence we’ve come to expect. The attention to detail is apparent before you even see the model and the “unboxing” is an experience in itself. The packaging includes graphics from an original EMD SW1200 sales brochure and the cover of the owner’s manual is a copy of the original prototype operating manual. If the love Rapido has for their products isn’t obvious yet, they include a bunch of stickers which make it clear.

The manual itself provides 17 pages of detailed instructions on proper break-in and disassembly and covers three different modes of operation (DC silent, DC sound, and DCC sound). As you would expect, most of the information focuses on operating the DCC sound version of the model. A brief history of the prototype and parts and warranty information are included.
Once you get past the literature and goodies and remove the foam, you’ll then see that the model itself is securely encased in a plastic clamshell which does a fine job of protecting the many railroad-specific details that are a hallmark of Rapido’s work. Any additional detail options, including any parts that are just too delicate to apply at the factory, are included in a separate bag inside the foam. After you remove the engine from the packaging, you can really appreciate the handiwork. The model matches all the dimensions of the prototype and features flush-fitting windows (with simulated gaskets), a full cab interior (including control stand and fire extinguisher), see-through steps, etched-metal grilles, and LED lighting. In addition to working headlights and illuminated number boards, the model also includes cab interior lighting and ground/inspection lights. With the DCC version, all these lights are independently controllable. 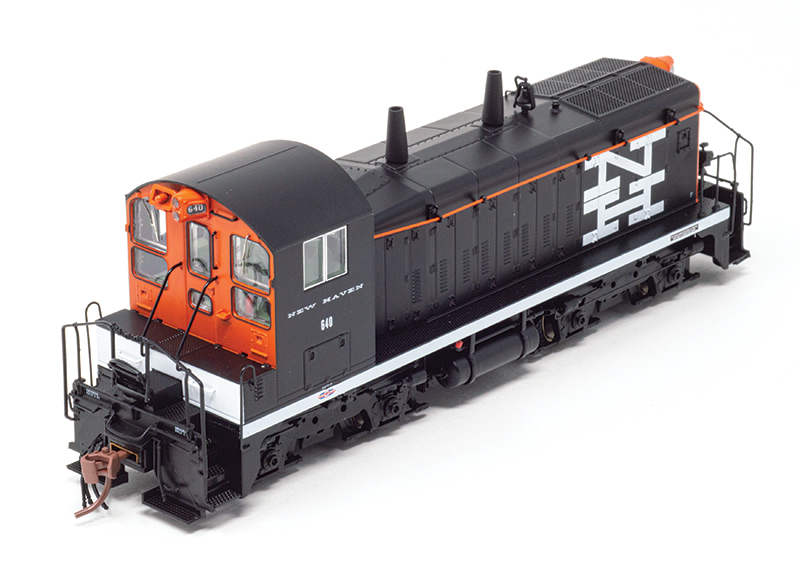 ABOVE: My era focuses on New Haven’s Alco S-series switchers; however, after reviewing this slightly later era EMD SW1200 model I find myself appreciating this switcher and the 1950s timeline. This DCC-sound release won’t be going back in its box and on a shelf any time soon.

New Haven details include Hancock air whistles, Flexicoil trucks (including side sill cutouts), MU stands, working drop steps, and more hoses on the ends than you’ve likely ever seen before on a switching engine. But they’re all true to the prototype and mounted at the correct angle. If you find that they catch on grade crossings or switch frogs, just bend them up a bit. Whether you’re a New Haven fan or not, Herbert Matter’s paint scheme is accurately applied and really makes this model pop. Fastidious New Haven modelers may notice that the grab irons on the back of the battery boxes, and rear-facing Hancock whistle, should be black – but that’s easily remedied, and not all units had the rear-facing whistle (though NH 640 did). While you’re at it, you may also want to paint the bell a brass color… but only if you’re modeling early spring 1956. Located right next to the stacks, the bell turned black pretty quickly. True eagle-eyes will notice not only the EMD builder’s plate on the side sill below the cab, but also New Haven-specific trustee information above the front trucks indicating that these engines were leased by the railroad.

The model isn’t just a visual stunner, though. Equipped with ESU’s latest LokSound V5 decoder and “Drive Hold” (DCC version only), this HO SW1200 runs and sounds as good as it looks. The sound file accurately depicts EMD’s 567 prime mover and I’m just old enough to remember Hancock whistles, so having that sound included and already programmed is a real treat. Right out of the box, you get a full startup sequence by pressing F8 and once you give it some throttle, the model starts moving smoothly as the prime mover notches up. You’ll want to be sure to run it in a bit though. The model runs even more smoothly after the break-in period recommended in the manual. Slow speed is very good, and while the top speed may seem a little high, remember that New Haven units were geared for road use as well as switching.

Conclusion
Rapido has given New Haven fans a real treat with this model. With all its NH-specific details, this reproduction can be considered a true DEY-7 and not just a generic SW1200 diesel switcher. It’ll be right at home switching one of the many rail yards of Southern New England or, given its MU capability and Flexicoil trucks, it’ll even look right leading the occasional road job. But don’t be surprised if you find me using it on a lowly local way-freight, picking its way along a weed-covered branch line. 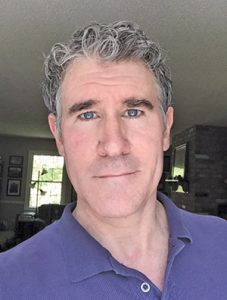 About the Author – Chris Adams is an avid modeler, cyclist, and car enthusiast. He and his wife reside in Connecticut. This is Chris’ first review for Model Railroad News. 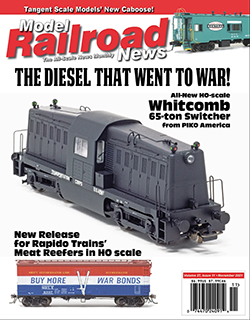