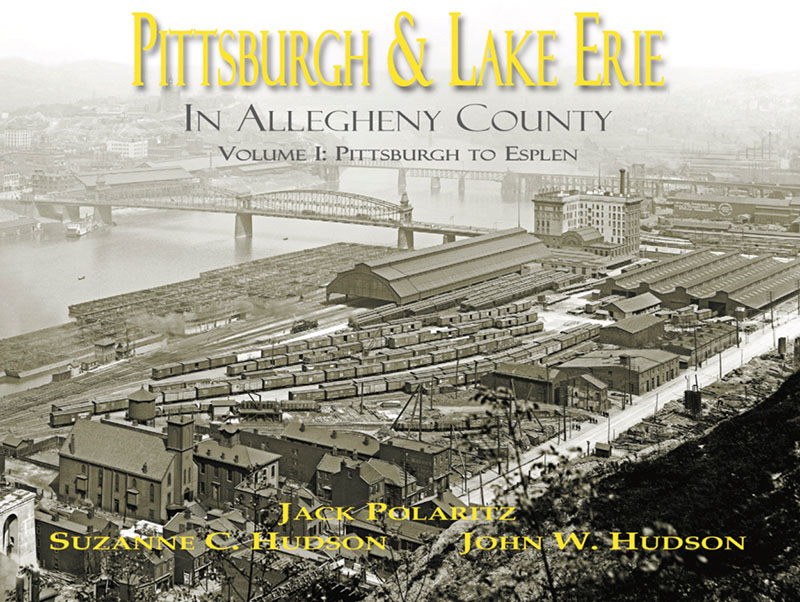 In the 1870s, it was obvious to local business and political leaders that the stranglehold the huge Pennsylvania Railroad held on commerce in Pittsburgh and the surrounding areas had to be broken. Exorbitant rates, favored shippers, and poor service to most, was crippling the area’s potential for growth. From this scenario the Pittsburgh & Lake Erie Railroad (P&LE) was born.
With many steel mills and other heavy industries as customers, P&LE became a high tonnage hauler from its inception in 1879. The moving of steel’s raw materials, coke, iron ore, and limestone to the many on-line mills, and transporting finished steel products out, continued for more than a century of the railroad’s operations. Bituminous coal directly from mines, and sand from interchange with local railroads, also added large amounts of tonnage. In 1978, P&LE operated only one-tenth of one percent of the total U.S. rail trackage, but remarkably hauled one percent of the country’s total tonnage… P&LE earned its nickname of “Little Giant” honestly.

Adding diversity to this heavy freight operation were passenger trains, up to 50 daily during the first half of the 20th century. These included long-distance service from Pittsburgh to major cities, through arrangements with other roads. Additionally, P&LE operated daily commuter trains between Pittsburgh and points railroad west until 1985. This hardcover book is a little giant in its own right. Printed on high-quality gloss paper, its 322 pages contain 373 black and white photos, maps, drawings, and documents procured from in-house P&LE archives, a variety of public sources, as well as the private collection of one of the book’s authors, Jack Polaritz. These visuals are accompanied by highly detailed descriptions that capture 100 years of the railroad and Pittsburgh itself. The focus of the book starts at the Pittsburgh Terminal, headquarters and virtual geographic center of P&LE, located on the south bank of the Monongahela River, and continues west to Esplen, a distance of 3.3 miles. After the first two chapters, which give great insight into the formation of the railroad from the business standpoint, it is interesting to note that the immense amount of information that follows is the detailing of only slightly more than three miles. 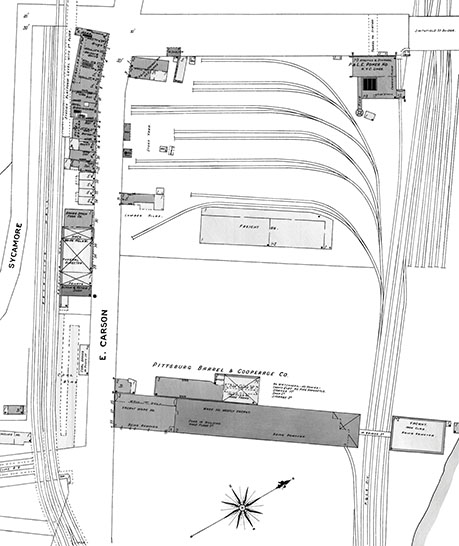 ABOVE: For the modeler, there are numerous pictures and illustrations ideal for use as inspiration in building a model railroad.

Having lived virtually my entire life in greater Pittsburgh, I first became a fan of P&LE in my mid-teen years. That interest continues to this day, with a portion of my HO-scale layout based on the railroad. That being said, I’ve learned more history from this book, about the railroad and former industries it served, than could be imagined. My firsthand knowledge of the area began in the 1960s with little understanding of the industrial past. I find myself opening the book to any given page, examining the photos, reading the highly detailed captions, and learning “what used to be there.” I repeat this exercise over and over.

Interestingly, this is a first volume of P&LE in Allegheny County. The second volume is in the works, and will cover the trackage from the shops and yard in McKees Rocks, westward to the Beaver County line. There is much more to learn. Who will enjoy this book? That’s best answered by the authors themselves in this portion of the last paragraph of the book’s preface: Whether you are a Pittsburgh & Lake Erie Railroad aficionado, a railfan in general, a local Pittsburgh historian, or a genealogist, we hope you will enjoy the trip over this portion of the P&LE.