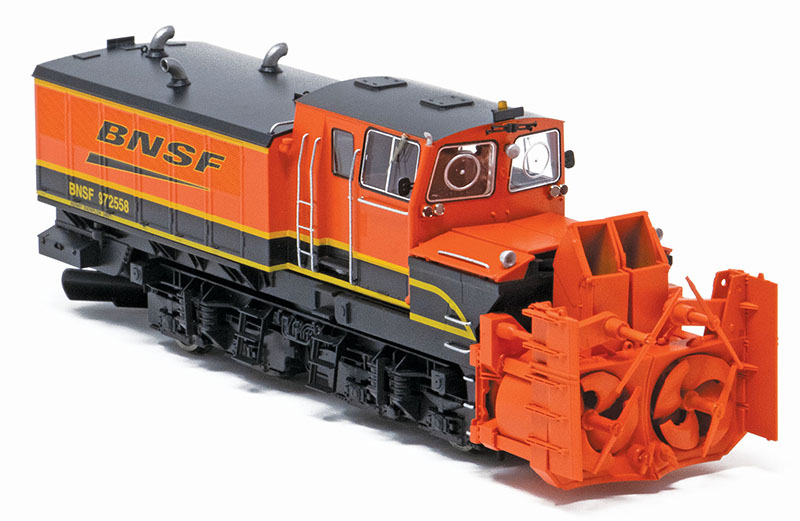 Decked out in contemporary BNSF Railway attire of orange and black with the road’s “wedge” logo, Roco’s snow blower will make a unique addition to your railroad’s roster. The highly detailed HO-scale reproduction includes interior with figure, many separately applied details, and metal knuckle couplers.

Snow has always been an operational hindrance to railroads with territory subject to winter weather. The 1980s era Beilhack snow blower was a much-needed asset for railroads around the world and addressed several snow clearing challenges. One challenge was crew visibility. With constant ice buildup on the windshields, maintenance crews had a difficult time seeing the rail portions they were assigned to clear. Beilhack’s snow blower addressed this by installing rotating portions of the windshield. The con-stant motion would not allow for ice buildup. Additionally, snow clearing operations were always difficult to plan as previous snow blowers only had a blade at one end.

Positioning a snowplow for a complex rail system could prove to be difficult in turning around the snow blower so the blades could face the area that needed to be cleared. Beilhack addressed this by creating their snow blower to turn 180 degrees to face the opposite direction while the trucks stayed on the rails. Another unique feature of the snow blower was its self-propelled power. Many snow blowers needed locomotives to push the equipment forward into the snow drifts. Beilhack’s snow blower was an efficient and effective snow blowing tool for the railroads to use. CSX currently owns an ex-Conrail unit that is still in use today. 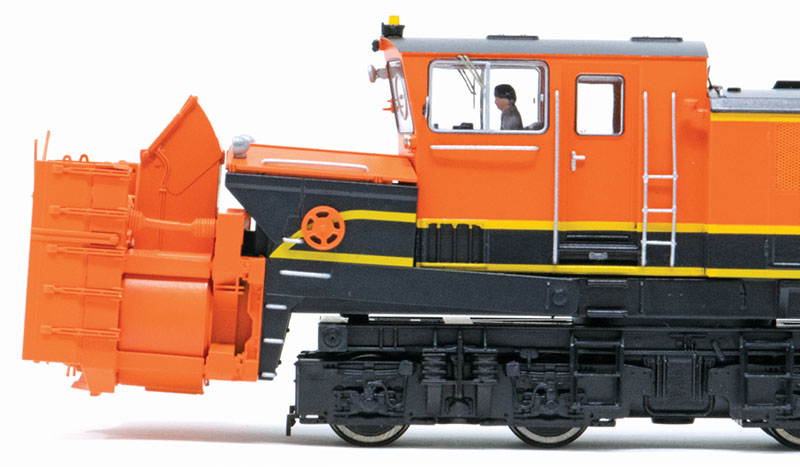 A front view of Roco’s snow blower reveals the immense detail of the snow removal blades and front hardware. This HO-scale reproduc-tion follows a Beilhack prototype.

Roco’s Snow Blower
A large contingent of hobbyists love to model unique maintenance-of-way equipment including snow removal equipment. Over the past several years, the offerings for winter maintenance-of-way equipment have provided unique detail but not much animation. That all changed with Roco’s HO-scale Beilhack snow blower. Roco is a model train company based in Salzburg, Austria, and well-known to most seasoned participants in the hobby. Roco has served as a supplier to several North American brands for decades and also markets hobby products under its own brand, such as this new HO snow blower.

When first unboxing the snow blower, Roco’s attention to presentation is instantly notable. The model comes in a clear plastic case sitting on its own plastic molded roadbed and track. This model is released from the casing by applying pressure on case tabs and turning a knob. 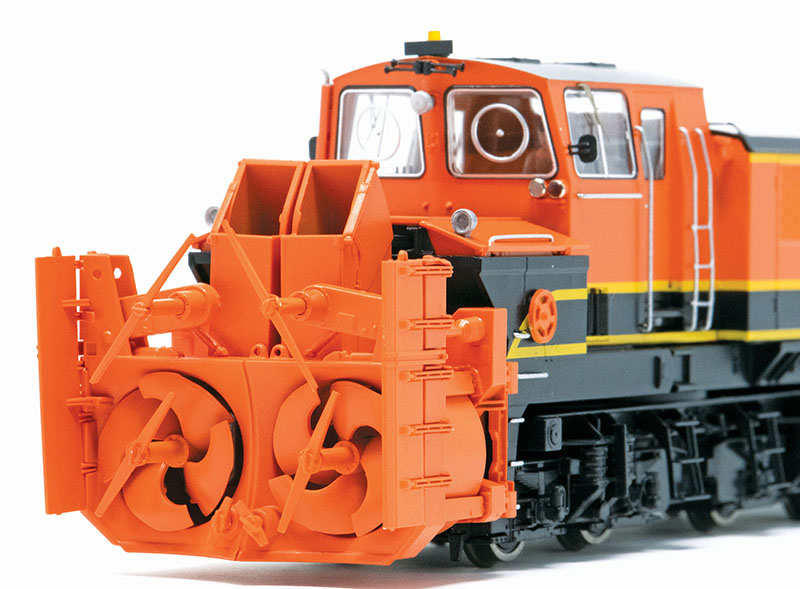 An up-close look shows the immense amount of detail on the model. The cab has a highly detailed control stand, figures installed, separately applied windshield wipers, grab irons, and ladders. The windshield faithfully replicates the circular cutouts for crew visibility. Although the cutouts do not turn as they do on the prototype, many other aspects of this snowplow do come to life with movement.

The front of the snow blower features blades that move when activated by their assigned Digital Command Control (DCC) function. Additionally, the entire blade housing can pivot up and down when activated by DCC and will stop precisely when you press the function button again. The model features LED lighting which includes ditch lights, headlights, taillights, and cab-mounted beacon light. However, the most interesting feature is the ability for this snowplow to pivot 180 degrees just like the prototype. 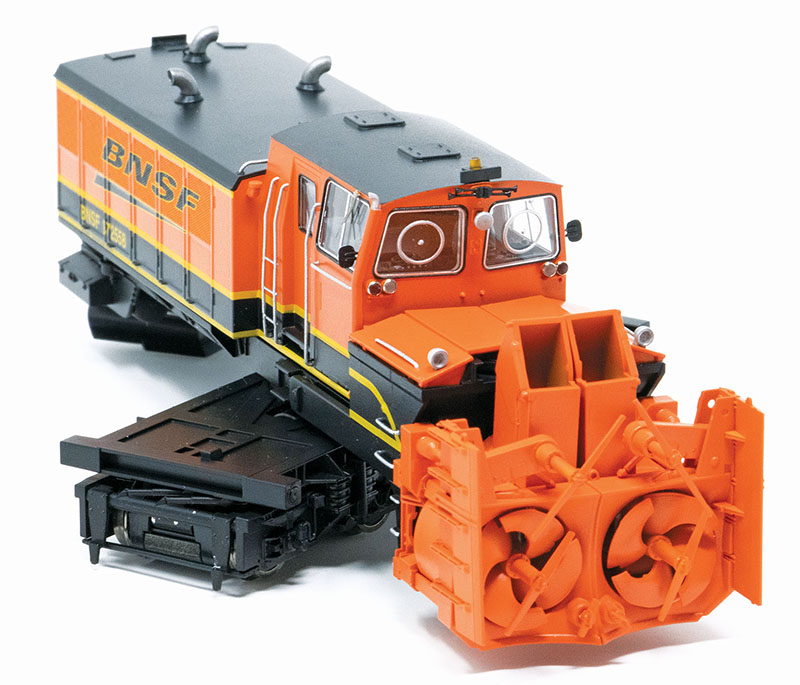 It can do a 180! In this view, Roco’s snow blower is shown in transition of a 180-degree turn. Like the prototype, this model is able to tackle work in two directions. Operators must remember to take care during operation and be sure you have no trackside details in the way, when you spin this snow blower around on its frame.

Another impressive feature is the slow speed control and the Zimo sound. The 5-pole motor is the smoothest I’ve seen in an HO-scale model. The sound is crisp with no speaker rattle or sound resonance issues.

The only glaring imperfection I can find is this model’s colorful BNSF Railway paint scheme and that’s only because a BNSF Beilhack snow blower never existed. Roco’s release places a BNSF road number from a different type of snow blower on this Beilhack-prototype model. You will find a CSX version from Roco that is accurate. That model represents an actual CSX roster member.

Overall, Roco’s snow blower is an amazing HO-scale model. The plastic body features excellent detail. The many animated features and audio ability (controlled by DCC) will delight modelers and their families alike. This is a unique and uncommon offering and while it carries an asking price of just under $500, it is certainly not an everyday release and makes for an impressive addition to your collection. 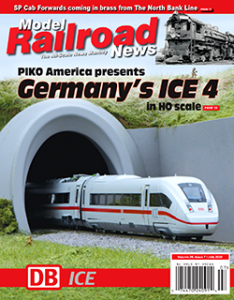 This review appeared in the July 2020 issue of Model Railroad News. Subscribe Today!