This is the first production example of Railfan Models’ Boeing B777 covered well car rep-lica. This HO-scale offering will be available in very limited quantity as a fully assembled and decorated release (as shown) by Nebraska’s Spring Creek Model Trains. You will also be able to purchase unassembled and undecorated kit versions from the manufacturer, Railfan Models.

The prototype is a specialty piece of railroad equipment used to transport subassemblies of Boeing’s B777 aircraft. Many railfans refer to these cars as a Skybox and variations have been in service since the mid-20th century on North American rails. Some modelers will recall a Skybox offering produced in HO and N scale many years ago (LBF Models and later Hubert’s), but that offering depicted an earlier style. This new offering from Railfan Models presents a well car base, similar in some ways to cars used in container service, with a specially designed hood covering to protect components of Boeing 777 aircraft during transport from one assembly site to another.

A three-volume series of softcover books by Andrew Klamka, Shipping Planes on Trains, covers in great detail the subject of how this unique cargo traveled from Wichita, Kans., to Seattle, Wash., for final assembly. You can find out more about Mr. Klamka’s self-published series by emailing him.

ABOVE: The interesting prototype was researched by Railfan Models’ founder Brien Wood. The under-side of the well car reproduction accurately captures the pattern and detail of the real car. The model’s design included not only replicating this prototype, but also producing a miniature that will operate well on model railroads. The assembled model includes body-mounted metal scale-head knuckle couplers and metal wheels mounted in accurate roller bearing truck sideframes.

David Zucker, who with his family owns and operates Spring Creek Model Trains in Deshler, Nebr., is a model railroad enthusiast and fan of these specialty rolling stock prototypes. On June 10, 2020, MRN editor Tony Cook was invited to the unveiling of Railfan Models’ HO-scale Boeing B777 covered well car replica at the Zucker’s hobby shop in rural Nebraska. Railfan Models’ Brien Wood showed the first production model and an early sample of this release, as well as several heavy-duty flatcars and loads from the company’s line. Watch for coverage in the near future on Railfan Models’ heavy-duty flatcars and loads.

ABOVE: The well car and hood are two subassembly pieces that are glued together and receive many details to complete their authentic appearance. The internal part of the car doesn’t reproduce the prototype, but instead includes brac-ing to enhance the robustness of the finished model. 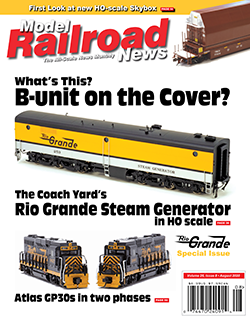 This announcement appeared in the August 2020 issue of Model Railroad News!