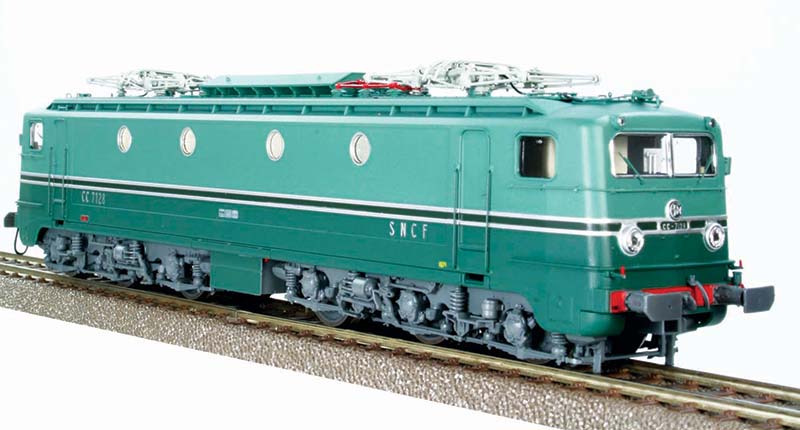 Review and Photos by John Menges

The latest HO-scale motive power release by REE Modeles of France has materialized, and it is found to be a model of none other than the CC7100 record-setting six-axle electric locomotive. The new model is imported to the U.S. exclusively by Reynauld’s Euro-Imports.

This is the first time I have reviewed a REE release. REE Modeles has been in existence for the last several years and filled a void in the French model train market by releasing models not previously made by other European manufacturers. The company has gained distinction for the level of detail offered in its models and the functional innovation of its SNCF (Société Nationale des Chemins de Fer Français or French National Railways) 231 Pacific, which was the first French HO steam locomotive model to feature working cylinder purge and synchronized puffing exhaust. Each year for the past several years, REE has announced groundbreaking new French-prototype models at the Nuremberg Toy Fair. These REE offerings are always much anticipated by the European model railroading community. REE’s latest offering does not disappoint.

First, let me offer some background on the SNCF CC7100. The 7100s were the product of SNCF’s electrification project of the former Paris-Lyons-Mediterranean (PLM) main line. SNCF was looking for an electric locomotive that could pull an 850-ton train at 93 mph (150 kph) on 0.2 percent trajectories and 74 mph (120 kph) on 0.8 percent gradients. Locomotive builder Alsthom responded with two prototype units in 1949, and, after acceptance, series production commenced from 1952 to 1955. Alsthom and Fives-Lille produced 58 CC 7100s, in addition to the two 1949 prototypes. The 62-foot-long locomotives weighed in at 107 tons, and their six traction motors produced 4,800 hp. Built for France’s 1.5 kV DC southern network, the locomotives were geared for a maximum speed of 93 mph (150 kph). The CC 7100s were the first French DC electric locomotives to run faster than 62 mph (100 kph), and they were SNCF’s first high-speed electrics where all axles were powered. The design was considered so successful that several hundred copies were built for export to Spain, China, the Soviet Union, the Netherlands, and Morocco. 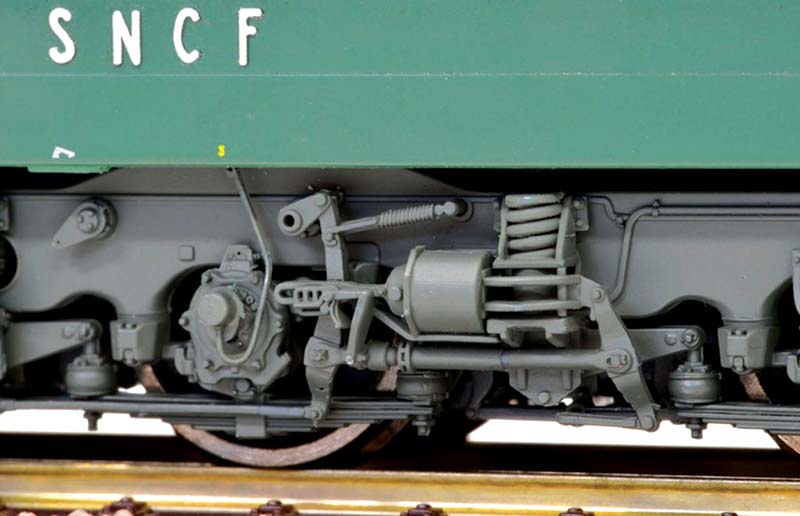 The truck sideframes are a miniature wonder. Numerous castings comprise the sideframes on this HO model that is made of more than 400 parts. REE’s CC7100 is the most accurate HO model of this iconic locomotive to date. This was realized largely through 3D scanning of remaining prototypes.

Shortly after introduction, the CC7100s served as the primary power for nearly all prestige trains in the eastern and southwestern zones of SNCF’s territory. It is here where their otherwise ordinary story becomes interesting, and why it is that REE likely chose to make HO models of these soon-to-be-iconic French locomotives. During the 1950s, the SNCF was conducting investigations into high-speed rail using conventional trains. Some CC7100s received modification for high-speed operation. On February 21, 1954, CC7121 reached a speed of 151 mph (243 kph) on the SNCF line between Dijon and Beaune, France, breaking a rail speed record set nearly 20 years before by the famous British Class A4 Mallard steam locomotive. A year later, on March 29, 1955, CC7107 set a record speed of 206 mph (331 kph) near Bordeaux, France — a record that stood for nearly a half century for a locomotive-hauled train. CC7107’s record-setting run not only shattered its sister’s previous record, but it also destroyed the infrastructure of the Bordeaux line: the tracks were left in unusable condition because CC7107’s trucks bent the rails out of alignment. As well, the speed tests damaged CC7107’s suspension and pantograph blade, which led to improvements in current collection on high-speed lines. The 1954–55 speed trials provided SNCF with data to develop the 124 mph (200 kph) Mistral train in 1967 and later, the TGV, in the 1970s.

In Mistral service, the CC7100s were able to cover the distance from Paris to Dijon (198 miles; 319 kilometers) in 2½ hours. They averaged 93 mph (150 kph) in express train service, but as time wore on, they found themselves increasingly used in freight service, bumped from their passenger duties by newer, more modern electric locomotives. In later years, they were rebuilt with updated SNCF headlight housing and the skirting was removed from their pilots. Some units were fitted with third rail pickup shoes for work around Chambéry, France, in third rail territory. Other units were used in push-pull commuter service. The last units worked around Lyon, Dijon, Miramas, and Narbonne through 2001. In total, the CC7100s lasted nearly 50 years and kept their original livery the entire time. Five CC7100s were saved from the scrap heap, including record-setting units CC7121 and CC7107.

REE’s CC7100 is a near-perfect HO rendition thanks to scrupulous research and 3D scanning of the prototype. The release is made of more than 400 pieces and was designed in France and manufactured in China. It is composed of a heavy die-cast metal chassis and an ABS plastic body. The model weighs in at one pound and 5/8 ounces. REE offers the CC7100 in era III, IV, and V versions, the observable differences being distinguished by the color of the side stripe and the buffer beam since the locomotives kept the same livery all their working lives. 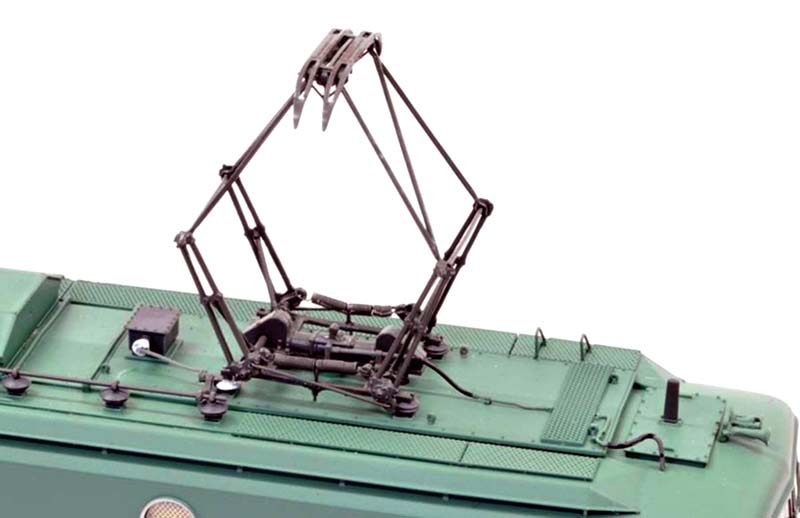 CC7100s had scissors-type pantographs throughout their careers. REE will soon offer a retrofit kit to motorize the pantographs on its HO-scale CC7100 electric locomotive. This will allow operators the ability to raise and lower the pantographs digitally.

The first thing you will notice on handling the model are the truck sideframes. These components are so outstanding in their detail that they set a new standard for other manufacturers to aspire to achieve. The brass-quality sideframes are really a miniature wonder. I can just imagine the tooling it took to make the castings. The fine detailing does not stop with the trucks. The HO-scale CC7100 features etched-metal pantographs that can be motorized if so desired, sprung buffers, and illuminated cabins that feature full interior detail, including controls, clipboards, and sunshades.

Out of the box, one pilot is detailed with full skirting, brake hoses, and train line, with prototype screw couplers supplied in a separate parts bag. The other pilot has partial skirting and shortened brake hoses with no couplers installed so that the NEM coupler box can swing freely on that end. You can put full pilot detail on either end for a display model or partial detail on either end for an operating model.

Looking at the underside of the model, you’ll find close coupler mechanisms and NEM coupler sockets on both ends. The model comes equipped with Märklin-style hook-and-loop couplers, but these can be exchanged for the NEM couplers of your choice or Kadee NEM No. 362 couplers. To access the mechanism, you must first remove the skirting. Then gently lift the carbody upward, taking care not to sever or rip out the wires/cabling between the chassis and the carbody interior.

Looking inside the CC7100, you’ll find a circuit board with a programmable ESU LokSound V4.0 21-pin decoder covering a five-pole Cannon motor with dual flywheels. Universal shafts connect the motor with gear towers on each truck that power all the model’s six axles. One wheelset per truck is equipped with traction tires, which can be exchanged by the modeler for non-traction tire-equipped wheelsets. 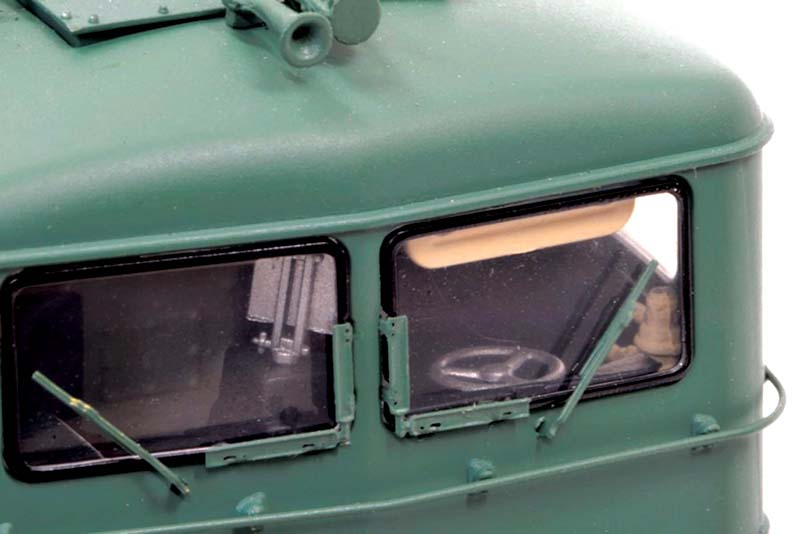 Thin-wall cab glass reveals a richly detailed cab interior that is a joy to behold when illuminated during night operations. No, that is not a brake wheel; that’s the throttle for the CC 7100. European electric locomotives have traditionally used steering-wheel type throttles.

The LokSound decoder can be used with an analog DC or AC system (the CC7100 comes in DC analog, DCC with sound, or AC digital with sound version), but you will not be able to access all the 21 functions of the decoder; you just get start-up and running sounds. The sound settings were superb from the factory. There are two notes to make here: first is the two-tone European horn — it was loud and clear on the sample model provided to Model Railroad News. This is realized through the LokSound’s 8-channel sound module. Second, there is a potentiometer that is adjustable on the circuit board where you can adjust to what curvature the flange squeal will initiate, from starting the squeal on a straight track to a tight curve. Another item of note: I did not notice any dimming of the head or tail lights when sounding the horn function — another plus for this model. Constant-intensity white and red directional head and tail lights are standard equipment on both analog and digital models, and there is a switch on the circuit board that gives you the ability to shut off both head and tail lights for multiple-unit consisting.

The sample ran quietly and smoothly during a two-hour break-in period in both directions. The locomotive started out at a crawl on speed step 1 and ran smoothly through the upper speed steps. The only thing that concerned me was some low-volume intermittent crackling heard from the speaker after the second hour of testing. Could this be a common problem with ESU sound decoders, or just an issue of dirty track interrupting current flow to the model? Whatever the case, I was impressed with the overall performance of the locomotive.

Over the decades, a number of model train makers have offered models of the SNCF CC7100 and other variants in HO, but none have been as detailed or advanced as what I observed with this new REE model. I believe that the REE CC7100 represents a new level of prototype fidelity that will spur other manufacturers on to greater precision in their models. 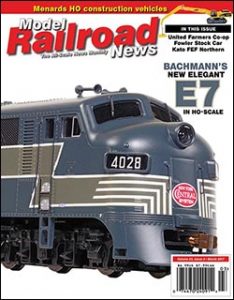 This review appeared in the March 2017 issue of Model Railroad News.