This late-1970s HO-scale GP38–2 decorated for Illinois Terminal (IT) may be the first time this road name appeared on a plastic ready-to-run diesel model. Life-Like’s GP38–2 celebrates 40 years in 2016 and is the subject of this month’s installment of “From the Archive.” Illinois Terminal was at one time an interurban carrier that roamed through central Illinois towns and rural communities, linking them with larger cities such as Springfield and Peoria, as well as making a connection into Missouri and St. Louis. 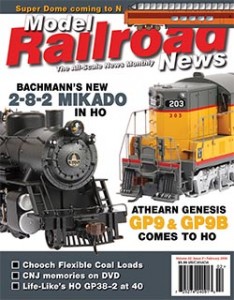 What was the first HO scale plastic diesel model of an Electro-Motive Division (EMD) “Dash 2” era prototype? I believe the answer is Life-Like’s 1976 GP38-2. Today, a wide-range of “Dash 2” EMD diesels are available to the hobbyist, but in 1976 — just four years following the introduction of these prototypes — only Life-Like’s GP38-2 made up the plastic HO “Dash 2” diesel market.

At the time of this tooling’s introduction, Life-Like’s diesel roster consisted of an F7A, F7B, F9A, and a trio of Alco models: Century 415 and 628 and RS-11. The F7A and F7B, as well as the RS-11 came over to Life-Like from Varney. Life-Like’s train line was introduced in 1970 and came about from the remains of the Varney HO train line. In addition to the F-units and Alco RS-11, Life-Like’s 1970 catalog included the die-cast metal EMD SW7 diesel switcher and GG1 electric that existed in Varney’s line. The addition of the center-cab Century 415 and F9A diesels came from American, Train & Track’s line, which was largely imported from Mehano of Yugoslavia. In the early 1970s, following American, Train & Track’s exit from the HO market, Life-Like picked up these two diesels for a short time. Life-Like is the first North American hobby company to import the Yugoslavian-made six-axle Alco Century 628. This Alco brute came into the line in 1973 and departed in 1976, though it made a 1980s return for a few years. 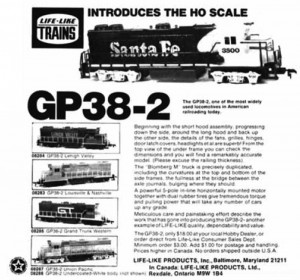 In 1976, Life-Like released an early production phase body GP38-2 (produced in Hong Kong). The one-piece plastic shell included fairly accurate scale dimensions and the “Dash 2” sight glass on the long hood of the engineer’s side of the unit and box-type air filter ahead of the dynamic brake blister. The unit sported a low short hood, which included twin headlights in the nose. Truck side frames presented the HO world with its first Blomberg M-type design with shock absorber mounted over one axle.

Somewhat flexible handrails mimic the design employed by Bachmann’s early HO diesels. The side handrails on both sides of the cab are held together across the lower stanchions by a horizontal bar that helps make up the sill or exterior part of the diesel’s frame. Another resemblance to Bachmann’s early 1970s tooling efforts are the see-through fans on the roof of Life-Like’s GP38-2 model. Crude by today’s standards and perhaps not amazing even in the mid-1970s, this unit’s rooftop radiator and dynamic brake fans include a pattern of spokes with nothing below, allowing one to see down or through into the model. You’ll find these designs on Bachmann’s original GP40 and U36B diesels of the early 1970s. I am not aware of any connection between Bachmann and Life-Like to support this resemblance in design; it may simply be by chance. However, compare the two models yourself and see if you agree that Life-Like’s GP38-2 looks like kin to Bachmann’s original GP40 and U36B offerings.

Grab irons, pilot handrails, and coupler cut levers are molded on the shell on the front and rear pilots, up the back end, and on the nose of this GP38-2. Separately applied air horns adorn the roof of Life-Like’s GP38-2 and appear to be molded in black plastic, remaining in this raw unpainted state regardless of the road name or paint scheme. Clear number boards and headlight lenses over the front windshield were an insert, as were the lenses in the unit’s nose. 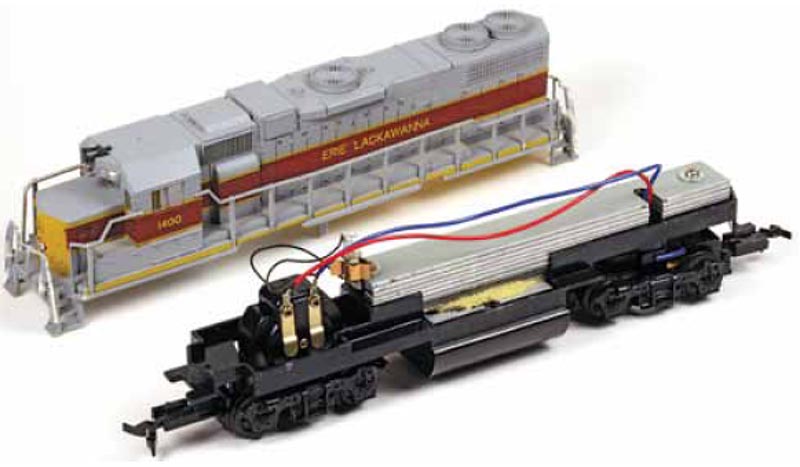 Though Life-Like promoted its GP38-2 as having a “powerful UNI-DRIVE system,” this HO effort possessed only a one-truck power drive. Rubber-like traction tires aided in the unit’s pulling ability. In comparison to what competitors like Tyco, Bachmann, Cox, AHM, Lionel-HO, and others were marketing at the time, this Life-Like GP38-2 did about as well as the rest, in my opinion. Life- Like did promote its HO diesels heavily with comparisons to other manufacturer’s efforts and boasted better-pulling capability with its Uni-Drive system, though again I never saw it as superior to the rest. As a young model railroader, I appreciated Athearn’s drive and found the 1975-introduced Roco diesels from Atlas to be the best HO had to offer at the time.

Of the introductory GP38-2 road names, Life-Like’s blue-and-yellow Warbonnet Santa Fe 3500 represented a non-Dash 2 example GP38 bought by that road in 1970. The prototype for Life-Like’s Grand Trunk Western GP38-2 model, like the near-match late-production GP38 Santa Fe, was a close relative too. Grand Trunk Western did own GP38- 2s, but Life-Like selected road number 5808 — a GP38AC, which is similar to a GP38-2. Grand Trunk Western did not include dynamic brakes on these Geeps. The dark Cornell Red Lehigh Valley GP38-2 model carries road number 314, which matches a GP38-2 prototype from the road’s collection of 12 examples (314-325). Union Pacific bought 60 examples of EMD’s GP38-2 in 1974, and Life-Like accurately numbered and executed a pretty good decoration on its HO model, using road number 2047 and including the then-new “We Can Handle It” slogan on the cab sides. An undecorated GP38-2 was available with a white body shell. The gray with yellow nose Louisville & Nashville GP38-2 was numbered 4123, which does match up with a series of GP38-2s owned by that road (4050-4144).

Life-Like added many road names for its GP38-2 model over the years. A good number presented fairly accurate representations of prototypes. The GP38-2 saw a number of uncommon-for-mass-market-release road names, including British Columbia Railway; Illinois Terminal; Pittsburgh & Lake Erie; and Toledo, Peoria & Western. Some paint schemes, regardless of prototype accuracy, seem to be hard for companies to avoid. Life-Like did include a red and silver Warbonnet Santa Fe model in its line as of 1982. Though this look would return with the Superfleet diesels of the 1990s, hobby manufacturers led the way, applying red and silver paint and large red Cooper typeface lettering on models years before the prototype caught up with the world of miniature. However, no GP38-2s joined Santa Fe’s Superfleet roster, as Life-Like envisioned with its offering. Collectors will find a near-endless supply of GP38-2 diesels wearing an amazing assortment of looks because Life-Like used this model in a number of promotional train set offerings. Some promotional GP38-2s even have low-nose and highhood versions for the same fantasy road. For example, IGA grocery stores did train sets in the late 1990s and offered both versions of Life-Like’s GP38-2 in various IGA liveries.

Powered and non-powered GP38-2s were available; most, if not all, duplicated the road number across both locomotives. These offerings came in train sets, as well as locomotive and caboose set releases. Life-Like sold its GP38-2 alone with a caboose as its “Deluxe Locomotive” offering, along with F7s and F40PH in the same single-powered diesel with caboose releases. The two locomotive sets (powered and non-powered) sold for many years with an Illinois Central Gulf set being one of the final offerings of this type to come from Life-Like for its GP38-2. That model marked the second Illinois Central Gulf GP38-2 offering. The original from the late 1970s presented named GP38-2 “Casey Jones,” while the newer effort featured the road’s orange-and-white scheme with a reversed white circle with black I-ball herald on the nose and numbered 9561. 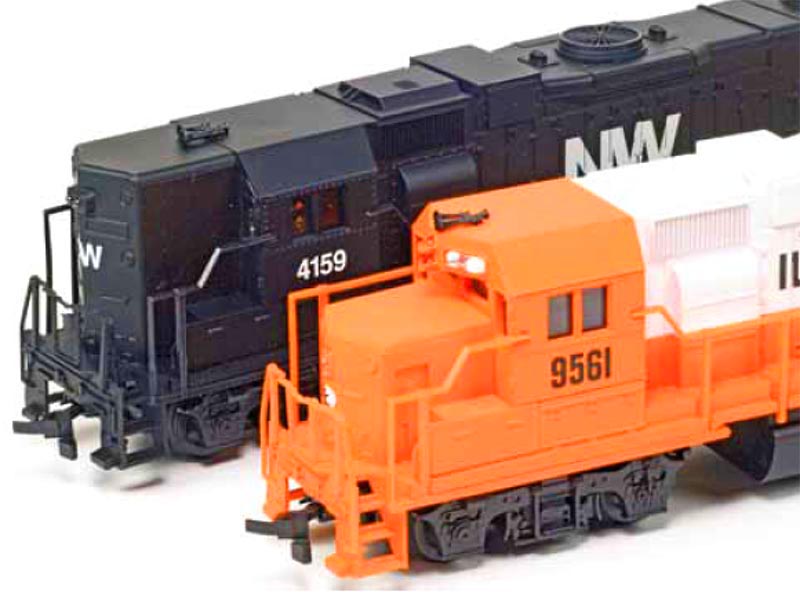 About two decades ago, Life-Like gave its GP38–2 a nose job. The black Norfolk & Western high-hood shows the results of the variant added to the company’s collection. Sitting in the foreground is the second Illinois Central Gulf release and what is considered to be the last new paint scheme produced by Life-Like for its GP38–2 prior to Walthers acquisition of this train line.

Revisions to Life-Like’s GP38-2 took place over the years, the most notable being the addition of a high short-hood GP38-2 shell that arrived in the 1990s. The high-hood length and dimensions always looked a bit suspicious to me. I’ll present this variation in the future and examine this shell in more detail at that time. Around the time of the high-hood GP38-2 introduction, body-mounted couplers could be found on most production examples. However, the wide-open pilots did not see a closure for a better appearance with this change in coupler arrangement. Couplers originally came mounted to the trucks, and the pilots were open to allow for lateral movement around sharp 18-inch radius curves packed with most train sets.

Replicating the general design of its HO scale version, Life-Like introduced an N-scale GP38-2 model in 1988. This late-1980s N-scale GP38-2 is not to be confused with the contemporary offering found in Walthers’ line. An all-new N-scale GP38-2 came in 2006, which was about the same time as the debut of the Proto 2000 HO-scale high-quality GP38-2 release from Life-Like. The original N-scale GP38-2 sold in train sets and individually for a number of years from Life-Like.

This popular Life-Like GP38-2 has remained in production since its 1976 arrival in the hobby. The model, now a member of Walthers’ Life-Like train set catalog, celebrates its 40th anniversary this year. A recent check showed a handful of Life-Like HO train sets offered with low-nose and high-hood GP38-2s still included in the Walthers catalog.

The next new plastic HO GP38-2 model to hit the hobby was Athearn’s “blue box” kit of 1985. This long-service GP38-2 remained a constant in Athearn’s line and saw service in the company’s Ready To Roll series beginning in 2002. Around the same time Athearn introduced its GP38-2 in fully assembled form for the then-new Ready To Roll line, Life-Like returned to this popular prototype for a Proto 2000 offering. Among the last Life-Like-produced Proto 2000 diesels prior to Walthers purchase of the train line from the company were two versions of EMD’s GP38-2 for Proto 2000.

The GP38-2 was one of EMD’s biggest selling diesels of all time. Other model manufacturers carried the GP38-2 in their product lines for HO modelers, including recent efforts by Atlas Trainman, Bachmann, and MTH Trains in more basic releases, as well as Athearn’s recently added Genesis high-end GP38-2. You’ll find a variety of production phases across these various models. Life-Like conjured up an early phase GP38-2, which would have been pretty contemporary for the time of the model’s debut. More recent efforts, such as the Trainman offering from Atlas presents a later production prototype with anti-climber pilots and protruding paper filter- style radiator screens on the unit’s long hood. Given the actual GP38-2’s popularity with more than 2,000 examples built from 1972 to 1986, this is a must-have model for many and a popular selection for a hobby manufacturer to include in its catalog.

As a young model railroader growing up in the 1970s, Life-Like’s GP38-2 was a favorite of mine. The addition of Gulf, Mobile & Ohio; Illinois Terminal; and Toledo, Peoria & Western (TP&W) paint schemes for this Midwestern railfan only made the model neater — all part of the fun and nostalgia of collecting and enjoying old HO trains. Look through your collection and see if you don’t have a sample of this classic GP38-2 of your own.

Tony Cook is editor of Model Railroad News, and is also the founder of the HO-Scale Trains Resource, a popular web site dedicated to the history of HO scale train set models.