One of the newest HO-scale diesel locomotive models, and one of the newest North American diesel locomotives, Siemens’ SC-44 Charger is quickly becoming a common sight on today’s North American passenger railroads. While Bachmann’s models represent examples from a joint order of state-owned Siemens Chargers, Amtrak, VIA Rail, and some commuter railroads such as Coaster have selected the Charger to replace their fleets of aging General Electric (GE) and Electro-Motive Division power. It certainly appears that Siemens’ Charger is the future of passenger trains, both model and prototype.

Passenger Power for the 2020s
Washington State Department of Transportation’s (WSDOT) Siemens SC-44 Chargers were built as part of a joint order by the state departments of transportation of Illinois, Michigan, Missouri, California, and Washington. These locomotives were ordered for use on state-funded, Amtrak-operated routes, with Washington’s intended for the Amtrak Cascades service between Vancouver, BC, Seattle, Wash., and Portland and Eugene, Oregon. Amtrak’s F59PHi fleet used on the Cascades route (and California’s Surfliner) was approaching 20 years old and becoming increasingly unreliable. Additionally, the small fleet size of six locomotives was quickly becoming insufficient with seven Talgo sets in service and the schedule growing. The Charger’s Tier 4 emissions compliance and 4,400-horsepower made it an appealing replacement. 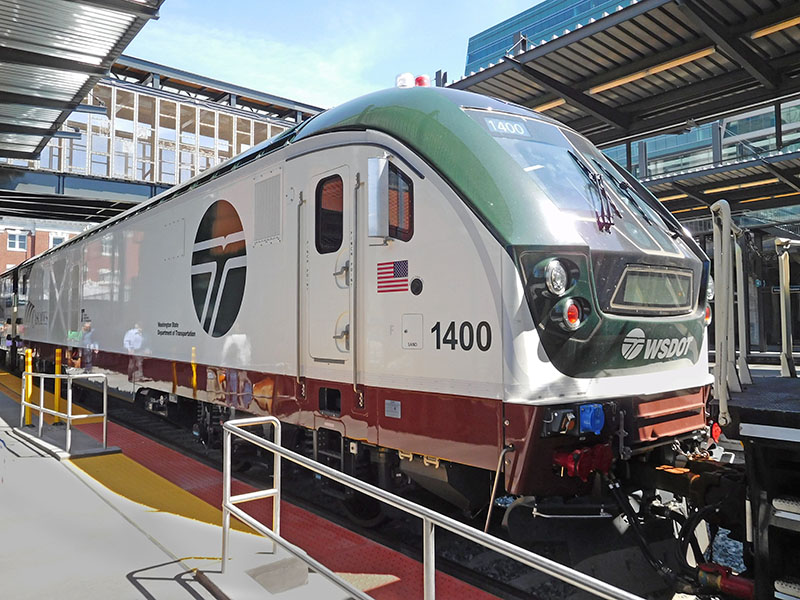 The eight WSDOT Chargers, numbered as WDTX 1400 through 1407, were delivered through the first half of 2017. WSDOT held a rollout event on May 21st, 2017, to debut the new locomotives to the public, displaying two Chargers at Seattle’s King Street Station. After entering service in late 2017, the Chargers operated with WSDOT and Amtrak’s five Talgo series-VI sets and Oregon Department of Transportation’s two Talgo Series-VIII sets. One unit, WDTX 1402, was destroyed in the tragic December 2017 derailment of the first revenue train on the Point Defiance bypass project route and it was replaced with another Charger numbered 1408, which pulled the final revenue trip of a Talgo VI on June 29th, 2020. While these are owned by Washington State DOT and operated by Amtrak, Amtrak has ordered its own fleet of 75 Chargers, classified as ALC-42s, to replace some of its aging fleet of GE “Genesis” P40DCs and P42DCs.

Bachmann’s Model
While to some this Charger may not be the prettiest passenger locomotive ever, Bachmann has captured the lights and sounds that make the prototype interesting. Among the more unique features of this model are the comprehensive lighting functions, possibly the most available from the factory on an HO locomotive. All the lights on the model are LEDs, and include working headlights, ditch lights, front and rear red marker lights, number board lights, roof strobe lights, an emergency strobe light, and interior corridor lighting inside the side vents. The front headlight also controls the lighting for the destination board below the windshield. The destination board is a neat feature unique to the Charger and is represented well on the model with illuminated orange text reading “PORTLAND.” The sign is only illuminated in the forward direction since it is controlled with the headlight; it would be nice to have it on a separate function so it could be on when in “push” mode on the back of a train. The rooftop strobe lights flash in a random pattern and can be toggled on or off with the F5 function key using Train Control Systems’ (TCS) decoder “light mode” feature. Light mode is accessed by pressing F8 twice and allows function buttons F3–F6 to operate either sound (and headlight) or full lighting functions depending on which mode is in use. Light mode is also used to control the ditch lights (F3), number board lights (F4), and marker lights (F6). The red emergency strobe light is triggered when the emergency stop button on a throttle is pushed or when F5 is pressed multiple times rapidly. 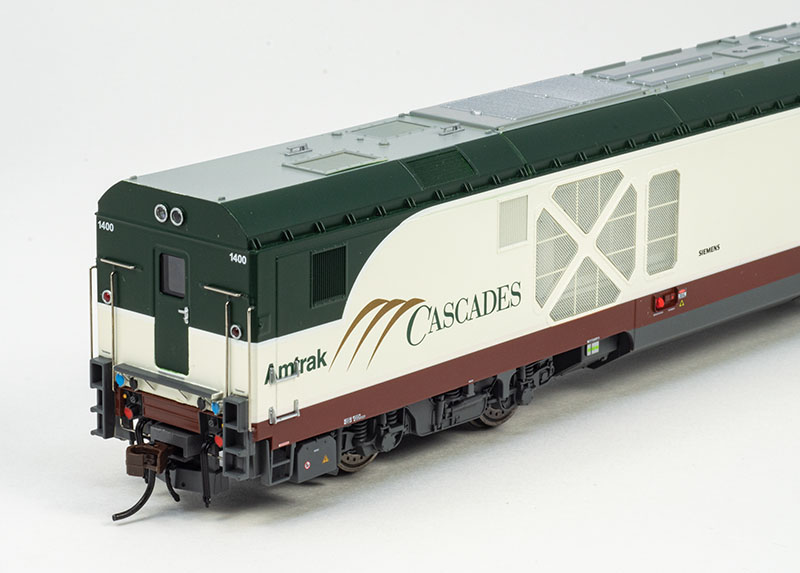 ABOVE: This is a finely detailed reproduction that modelers online have given many positive comments. This view of the rear shows the separate wire handrails presented in stainless steel appearance, the many color-coded covered receptacles and hoses, and the functioning reverse headlight over the door and red emergency lights located on the sides of the back end.

In addition to the many lighting functions, the TCS WowSound decoder brings the model to life with great sound and demonstrates just how much is possible with DCC. This was my first experience with TCS WowSound and, while there was a bit of a learning curve coming from my experience with ESU and Soundtraxx decoders, I was very impressed. The quality of sound produced by the decoder and speaker is very clear and has good bass. TCS and Bachmann worked with Siemens to record an actual Charger at the Transportation Technology Center (TTC) in Pueblo, Colo. The prototype’s Cummins QSK95 prime mover is accurately represented, from the low-idle noise reminiscent of a diesel truck to the loud, jet-like scream when the locomotive notches up from idle. The Nathan K5LA horn and electronic bell are both recorded from the prototype and sound great, but TCS has also included some other horn options including the K5LA from Bachmann’s Siemens ACS-64. The decoder includes all the usual functions like coupler sounds and dynamic brakes, but also includes less common features like station announcements (F26 and F27), and even windshield wiper sounds (F25), an appropriate feature for a locomotive from the rainy Pacific Northwest. One downside of this model is the speaker being located inside the fuel tank under the locomotive. After running it on a local club layout I found a coupler trip pin and some metallic debris stuck to the underside of the speaker grille after being attracted to the speaker’s magnet. The running qualities of the model meet expectations for a modern HO locomotive and the smooth-running drive had no issues pulling a train over steeper grades on a club layout. The factory-installed keep alive capacitor ensures that operation will be consistent even through switches and spots where the track could use a little cleaning.

Outside of its premium Spectrum steam locomotives and rolling stock, Bachmann generally has had a reputation of offering more basic models suited for beginners, but the Charger stands out as being in a higher tier with the likes of Athearn Genesis. The detail and accuracy are very good and lack any major discrepancies with the prototype, though some things like the one-piece truck side frames look out of place on an otherwise high-detail model. The model’s details are a mix of molded-on and separately applied parts. The roof detail appears to be all molded into the shell except for the horn and “ice-skate” antennas. Though they are not an etched part, the cooling fans have a look of depth and visible fan blades. The model’s large side vents, characteristic to the Charger, use a neat design where the mesh pattern is printed on clear plastic. This allows them to be better scaled and more durable than if they were etched metal parts and shows the interior corridor lighting well. The grab irons are all separately applied and made from silver wire to simulate the prototype’s unpainted grab irons. The cab interior has a nicely detailed “desktop” control stand with screen and level details, cab seats, and even the round in-cab camera on the “dashboard.” The only incorrect detail I could find on the model were the windshield wipers. Strangely, it appears that the windshield wiper configuration on Chargers is specific to the road name. The model has both wipers resting toward the right side, which appears to be correct for the California fleet and Coaster’s Chargers, while the Washington State and Midwest Chargers have wipers that rest with both blades meeting at the center of the windshield. I cannot say I’ve ever seen another locomotive with road-specific windshield wipers. 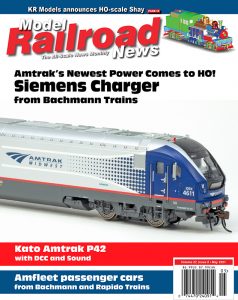 Read the full review in May 2021’s Model Railroad News!