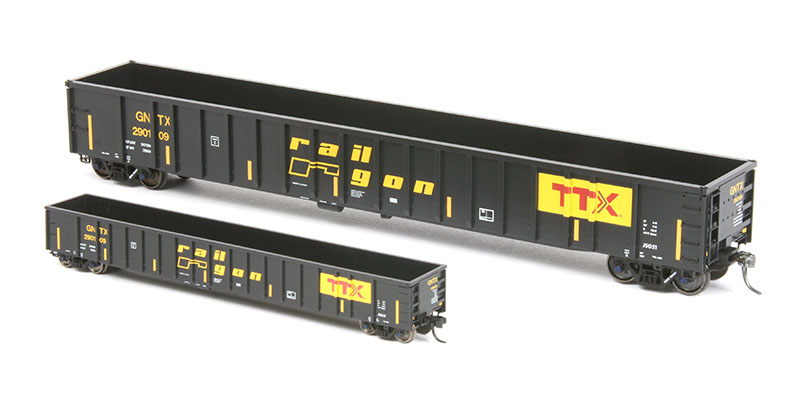 TrainLife.com joined with ExactRail to fill a gap in the HO and N scale model railroad market by offering five fan favorite “stand-in” gondola paint schemes. Although each lettering arrangement is worn by a different prototype, the nicely detailed ExactRail Thrall 3564 gondola rendering is serving as the host with the HO and N scale renderings available in six different road numbers per scheme. MRN’s samples came decorated for TTX Rail Gon number GNTX 290109 (from number series GNTX 290000–290199), as erected by FreightCar America in December 2012 and delivered with the railcar cooperative’s new or “Forward Thinking” logo. Although the FreightCar gondolas display only 17 ribs and a straight sill, they do share the 3,564 cubic foot capacity of the Thrall built cars.

As the title of this review might suggest, Trainlife.com’s exclusive freight car releases aren’t 100 percent kosher. With all the rolling stock designs being rostered by railroads during the past 20 years alone, it would be almost impossible for the model railroad industry to produce them all, especially certain car types that are particularly very close in design across builders. This is the case for the current fleet of 66-foot gondolas. TrinityRail, Greenbrier, and FreightCar America, for example, all catalog the same length mill gon, but each is constructed slightly different. The end result of this fact is that hobby manufacturers are limited in the paint schemes and road numbers they can reproduce on their particular 66-foot gondola models — if they wish to be entirely accurate.

Now, while the current model railroad industry trend is all about accuracy and high-quality detail on renderings, there is also another side of the business to consider. Often, fans are so enamored by a particular prototype paint scheme that the minor detail variations between different builders’ cars of the same general type are considered, well, negligible. Bending the accuracy rules popular in 21st century model railroading a bit may, in the eyes of some “rivet counter” modelers, seem like heresy. Trainlife.com’s takes a different approach and satisfies the many modelers for which “close enough” works and provides “stand-in” releases, such as this gondola release. For this mostly web-based hobby dealer, taking a well-detailed miniature of an accurately reproduced prototype, such as sister company ExactRail’s HO and N scale Thrall 3564 gondola, and applying state of the art decoration that meets the numerous requests of its customer base is a positive for the hobby as a whole. Not only does such an endeavor give the community some new relevant paint schemes to enjoy but allows further use of ExactRail’s excellent Thrall gondola tooling. Furthermore, as TrainLife.com is the sole entity marketing these stand-ins, the multi-scale venture leaves ExactRail to focus purely on true-to-life freight car renderings only within its own offerings.

Personally, I have no problem with stand-in models provided they indeed replicate very similar appearing prototypes. When it comes to 66-foot mill gondolas, however, I will be the first to admit these more modern freight cars are completely outside of my modeling purview. So, to get a grasp on what TrainLife.com is attempting with this release, I contacted one of the most respected authorities on “modern era” rolling stock in the hobby today, David Casdorph. Dave’s research and comments regarding these stand-in paint schemes is reflected in the critique of the TrainLife.com cars that follows.

Prototype vs. Stand-in
For starters, the gondola was one of the earliest freight car types to be employed by the new transportation system referred to as railroads. Before the first pair of rails were laid on this continent, though, flat boats with a shallow draft, referred to as “gondolas,” hauled the important industrial fuel of the period, coal, between river ports in the Eastern U.S. during the early 19th century. When the first railroads were built in the same general region beginning in the 1830s, it was only natural for rolling stock to be created that could continuing the coal ferrying process across land. As such, the term “gondola” was borrowed from the river craft with the same purpose and the name has stuck ever since. What essentially was a flatcar with boards added to its sides and ends for containing the coal would eventually evolve into higher capacity hopper cars; the low-sided gondola itself would remain on railroads’ rosters as a more ideal method of transporting higher density materials, though, such as steel plate.

As was the case for a variety of freight car types over the ensuing decades, railroads and their customers demanded higher capacity cars, so that they might realize additional cost savings in the movement of materials and finished goods to market, and the traditional gondola was no different. Generally speaking, what started out as wood-constructed 30-foot cars at the time of the American Civil War, had progressed to 42-foot steel gondolas about the time of World War I, followed by 52 feet, 6 inches during the late depression years, and then the 65 feet, 6 inch long gons common through the 1980s. The current industry’s standard 66-foot cars naturally grew out of the latter, although the 52-foot gondola is still a popular length today as well when load limit weights are necessary.

As with all the past length cars, customers could order gondolas with varying inside heights as needed and one of the details differentiating today’s 66-foot cars are their wall heights and thus interior volume. Taking a look at the prototype for ExactRail’s car being offered by TrainLife, Thrall Manufacturing Company constructed its 3,564 cubic foot capacity gondola with a 6 foot inside height. These 66-foot cars were introduced by the builder in the mid-1990s with approximately 1,350 being constructed by the time the company was purchased by Trinity Industries in 2001. Subsequently, Trinity’s Rail Group, now referred to as TrinityRail, more or less has continued to catalog the Thrall design as its own. To complicate matters, though, TrinityRail, as well as Greenbrier also offer the same length gondolas with 5-foot, 6-inch inside heights, which yields a 3,267 cubic capacity car. In addition to the varying heights, car end design, the number of ribs exhibited in the side wall construction, and the shape of the sill also become prominent features in identifying the various 66-foot gondolas on the market today. To the railfan, some of these differences, such as car ends, are probably too subtle to pickup on while a freight car is traveling within a consist, but the side profile is worth noting within the context of the five stand-in paint schemes Trainlife.com is making available in its custom production run. As a point of reference going forward, the Thrall gondola exhibited 18 ribs and a minor sill drop, as is apparent on the ExactRail model. 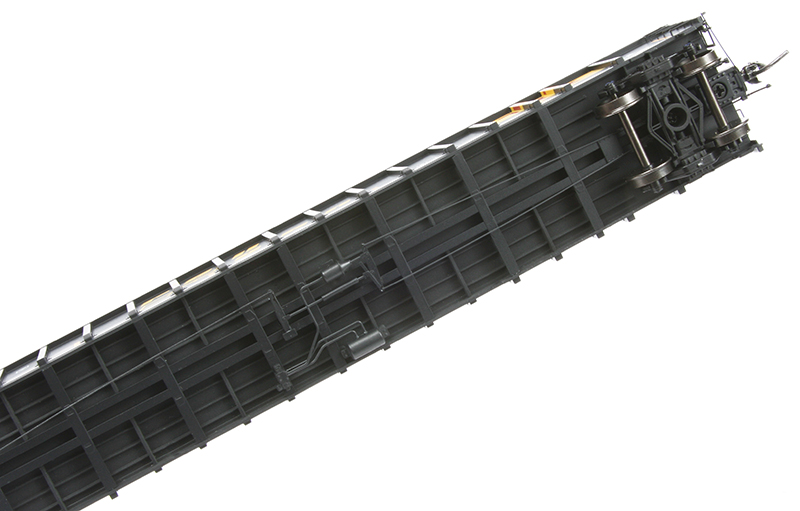 ABOVE: As is quickly becoming a trend in the model railroad industry, the details on the bottom of the freight car are as important as what’s above. Note ExactRail’s model includes an add-on sill with cross bearers assembly and full brake gear with linkage and plumbing. Also note narrow-style draft boxes, which contain depictions of shank wedges, striker castings, and nut/bolt details. Equipped with the manufacturer’s 100-ton ASF Ride Control trucks and metal wheel sets, we found the scale length HO-scale sample pictured to be an excellent performer, but recommend sticking with minimum 24-inch radius curves for best appearance and operation.

The first two paint schemes in its offering, which are lettered for railcar cooperative TTX (Trailer Train) and its fleet of pool service “Rail Gons,” are both based on real cars erected by TrinityRail. The initial decorated car wears the older TTX logo and was part of an order delivered in 2004 with reporting marks GNTX and numbered in the 297000–297299 series. This is followed by representatives from the GNTX 297300–297364 series built in 2005 and distinguished by the application of a small TTX “Gold Crown” logo applied to the far left side panel on the sides of the car. Both number series were constructed with the shorter inside height of 5 feet, 6 inches and thus are in real life 3,267 cubic foot capacity cars, although the TrinityRail gons do display 18 ribs and the minor sill drop like the Thrall prototype. An additional TTX decorated car, referred to as new or “Forward Thinking” logo version, and as examined in this review in both HO and N scale, represent gondolas delivered by FreightCar America in 2012–2013 and numbered GNTX 290000–290199. These particular gondolas were built with a 3,565 cubic foot capacity, and match Thrall’s prototype in that respect, but FreightCar America’s design features only 17 side ribs and a straight side sill. Again, rather subtle differences for the model railroader to observe when their Trainlife.com gon would be in operation on the layout, but present, nevertheless.

As we only received TTX “Forward Thinking” samples, I had Dave take a look at the other paint schemes depicted on TrainLife.com and he felt all appeared authentic, even NS, although not with the road numbers being offered, obviously. Returning to our examples, ExactRail’s paint and lettering applications were outstanding on both HO and N scale models. Graphics are sharp in execution, especially the post-2007 Tuscan Red TTX logo, the majority yellow and white lettering is opaque, and the tiniest of car data appearing on the sides and ends is readable under magnification — that goes for the 1:160 rendering as well. Regardless of which paint scheme strikes you, though, each is available in six different road numbers. ExactRail’s reputation for following scale dimensions and minute details is present on these Platinum level renderings as well. The HO-scale reproduction features separately applied wire-formed handholds and coupler cut levers; injection-molded end ladders; photo-etched brake platform; handbrake wheel above; and a complete underbody that includes: add-on sill and cross bearer assembly; complete brake gear with all the linkage and plumbing; car end air hose connections; and beautifully rendered 100-ton ASF Ride Control roller bearing trucks with the end caps painted blue. Being a bit more diminutive in size, the N-scale model utilizes more molded-in details, but does display a separate underframe with brake details, hand-applied handbrake wheel, and comparatively well-executed trucks.
More so, I have no complaints to report regarding performance of either scale gondola on the test track either. Between their free-rolling precision machined scale 36-inch diameter blackened metal wheel sets, an excellent weight (a steel floor plate helps with this attribute), and their use of Kadee or MicroTrains operating knuckle couplers (Kadee No. 58 scale-head couplers on the HO car and MicroTrains No. 1015s on the N-scale version), both samples were good to go out of the box as far as National Model Railroad Association specs were concerned. Due to their scale length, I would suggest keeping them on 24-inch and 12.5-inch minimum radius curves respectively. About the only detail left for the modeler to provide is a freight load! As the prototypes typically haul scrap steel, pipe, waste, and iron or steel plate, hobbyist can find several aftermarket detail kits and ready-to-use loads available that will fit into the ExactRail gon nicely. 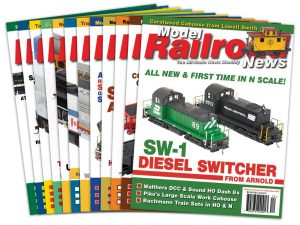