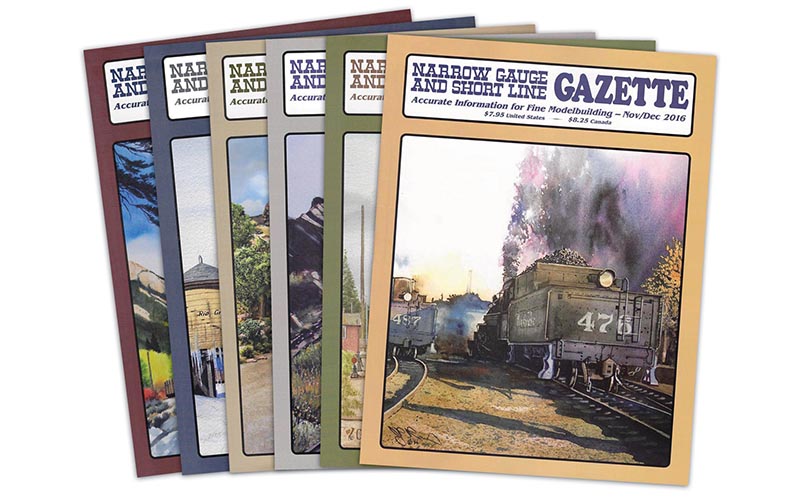 White River Productions is pleased to announce it has acquired the Narrow Gauge & Short Line Gazette magazine from Benchmark Publications. Kevin and Nadean EuDaly, owners of White River Productions, express their excitement on continuing the Gazette’s legacy into the future. “The Gazette is a great magazine to add to our line of prototype and modeling publications,” Kevin said.

Bob Brown, editor of the Gazette for over 40 years, said “Irene and I are now in our mid-80s and are concerned about the magazine’s future. We are both healthy, and still want to produce the Gazette. We also owe magazines to a lot of subscribers, and we want to see the Gazette continue, so WRP was the logical choice.” Bob will continue to edit the magazine, so there should be little difference in the Gazette going forward. Irene Brown, Benchmark Publications’ business manager, plans to gradually retire after some 35 years of day-to-day running the magazine, but will continue to proofread as needed.

As far as the magazine itself is concerned, readers will still be able to enjoy Bob’s “take on the hobby,” read the regular columnists like Charlie Getz, Jim Vail, Mallory Hope Ferrell, Craig Symington, and Steve Harris, and build from the scale drawings produced by Gary Caviglia, David Fletcher, John Midgley, Neil Pfafman, and Robert Stears.

Only the Gazette is going to White River Productions. Benchmark Publications will continue to sell its books and DVDs through Hayden Consulting, and will handle back issues of Gazette magazines produced before the WRP takeover. Published continuously since 1975, the first issue of the Narrow Gauge & Short Line Gazette produced by WRP will be the March/April 2017 issue.

Subscribers will be pleased to know existing subscriptions are to be honored and fulfilled by the new ownership. Fulfillment will be based on the number of remaining issues in existing subscriptions. New subscriptions, subscription problems, renewals, and address changes will be handled by White River Productions. You can renew online and contact our Customer Service at shop.whiteriverproductions.com, call toll-free 877-787-2467,  or 660-695-4433 (international), or by writing to our office:

“The web-sites are coordinated so orders can be taken and product shipped, and WRP’s magazine fulfillment system is in place,” said Nadean EuDaly, WRP’s Manager of Operations.

Continue to direct all inquiries regarding magazine content to editor Bob Brown. All articles, plans, letters to the editor, meeting notices and announcements, reviews, review items, and books for review should be sent to:

All advertisers should contact Mike Lindsay of White River Productions at 800-282-3291, via fax at 541-955-0346, or via e-mail at ads@whiteriverproductions.com. Advertising rates are available on request.