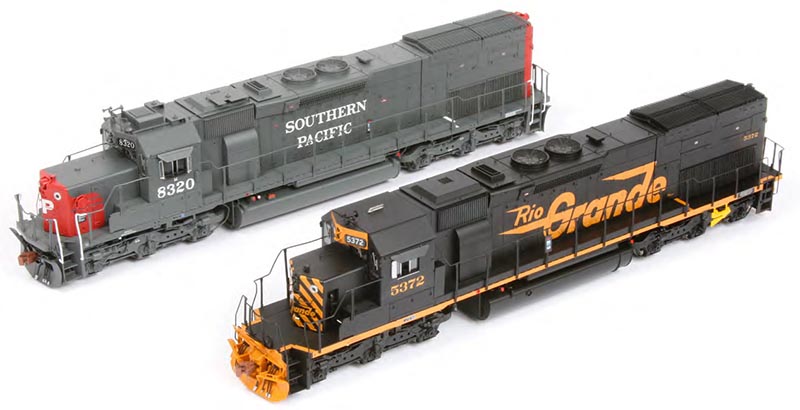 ScaleTrains.com is only the second manufacturer to offer a ready-to-run HO-scale model of EMD’s SD40T-2. Nevertheless, the company has hit the ball out of the ballpark with its new Rivet Counter renderings, which feature either D&RGW or SP road specific details and an optional factory installed LokSound decoder.

Review by David Otte/photos as noted

When I was 12 years old, my family took its first of several summer camping trips to central Colorado. On the morning after our arrival at the campground, I was awakened by the loud rumblings of a diesel-powered freight train that sounded as if it was literally right next door. My curiosity piqued, I opened the hatch to our camper to find a matched set of three six-axle black and orange locomotives traversing my not too distant horizon with “Rio Grande” in large letters painted on their sides and a long consist of hoppers in tow. I knew by their shape they were products of General Motors’ Electro-Motive Division (EMD), but there was something different about the rear end of the long hood on these units than what I was used to seeing. It wasn’t until returning home from our vacation that I realized I had witnessed on that special day my very first SD40T-2 “Tunnel Motor” sighting, and I have been enamored by the Denver & Rio Grande Western Railroad (D&RGW) and these 3,000-hp behemoths ever since.

As a novice HO-scale model railroader, I dreamed for years of the day when a 1:87 Tunnel Motor rendering would come my way. Unfortunately, when a miniature SD40T-2 finally came to market in 1984, Athearn’s “Blue Box” model, I was graduating from high school and moving on to college, the layout I had once built at my parents’ home now packed away. Nevertheless, it wasn’t too many years down the road when time and money once again permitted me to return to the hobby and an Athearn Tunnel Motor was one of the first locomotives to be added to my roster.

Southern Pacific 8320 represents one of six different road numbers ScaleTrains.com is offering from the road’s fleet of SD40T-2s. Outfitted with Locotrol master equipment for radio control helper service (denoted by the “M” on the cab side beneath the window), SP 8320 features a 123-inch long “snoot” or short hood (Phase II production). This unit was one of 15 (8307–8321) delivered in April 1978 and would be retired before the merger with UP took place in 1996.

Perhaps I’m a bit jaded, but over the subsequent years, I thought it strange that the hobby hadn’t seen additional ready-to-run HO-scale offerings of the SD40T-2 from other manufacturers. After all, everyone and their brother had offered that tiresome F-unit! Fast forward to 2018, however, and one company has finally seen the light! ScaleTrains.com has now joined the ranks, along with Athearn’s continued efforts in upgrading its model, in giving the Tunnel Motor the attention it so desperately deserves.

With both Athearn and ScaleTrains. com having released SD40T-2 renderings over the past year, I thought it would be worthwhile to offer a comparison of sorts, so readers desiring a Tunnel Motor for their roster might choose the offering that best fits their collecting/operating needs. With this in mind, my discussion will be limited to samples that are equipped with Digital Command Control (DCC) and sound, but both manufacturers are also producing standard direct current (DC)/DCC-ready models (with 21-pin connections) for those readers vested in analog operation or those do-it-yourselfers predisposed to adding their own decoders.

The Tunnel Motor Story
Railroads situated in the mountainous western U.S. share similar operational challenges, so it makes perfect sense to find Southern Pacific (SP) and D&RGW by the early 1960s comparing notes in their explorations for more powerful diesel locomotives. For example, the two roads would team up for an order with West Germany’s Krauss-Maffei for six (SP would later return for 15 more production units) ML-4000 diesel hydraulic locomotives. Delivered in 1961, these six-axle 4,000-hp units were the first high-horsepower locomotives of their kind in the U.S. (EMD’s closest model at the time, the SD24, could only muster 2,400-hp, and General Electric’s 2,500-hp U25C was still a couple years off.) Unfortunately, it wasn’t long before the prototype Hydros, as they were referred to by railfans, began to show their weaknesses and both roads found them to be too expensive to maintain. Rio Grande would end up selling its units to SP, whose fleet continued on in service for a number of years.

Yet, hidden beneath this seemingly failed experiment was an important lesson that would come back to haunt both roads soon enough. Rio Grande was the first to discover issues with the Hydro’s operation through long mountain tunnels. With their air intakes mounted high up on the carbody, the ML 4000s easily sucked in the hot and polluted air from the leading unit’s exhaust, causing reduced horsepower, accelerated wear, and eventual engine damage. Both roads began a series of test modifications to solve this issue, initially with externally mounted chimneys to take in air at truck level and deliver it up to the old intakes, and then later a more permanent fix with the installation of air intakes on the lower car sides and new internal ducting.

Nevertheless, both roads’ interest in the diesel-hydraulic concept evaporated quickly after EMD announced its new 1966 diesel-electric lineup, which, designed around its new 645-series engine, AR10 alternator, and D77 traction motor, included the four-axle GP38 and GP40 and six-axle SD38, SD40, and SD45 models. Initially, the 3,600-hp SD45 garnered the most attention within SP’s motive power department as it appeared to be exactly what the road had been looking for when it approached Krauss Maffei at the beginning of the decade — a locomotive with speed and high tractive ability. As a surge in western coal business entered the equation at this time as well, Rio Grande followed its neighbor’s cue and began purchasing SD45s.

By the end of the decade, however, the same cooling problem that plagued the Hydros had reared its ugly head once again and SP’s SD45s began to experience overheating and a loss in horsepower when traveling through the road’s numerous tunnels and snow sheds. To address this situation, and in part to continue to compete in the ensuing horsepower race with General Electric, EMD introduced an upgraded 4,200-hp SD45 prototype in 1970, referred to as the SD45X. It not only exhibited an expanded radiator section with four cooling fans, as compared to the SD45’s three fans, but also rode on new six-axle HT-C trucks that could take advantage of the higher horsepower and provided superior traction. 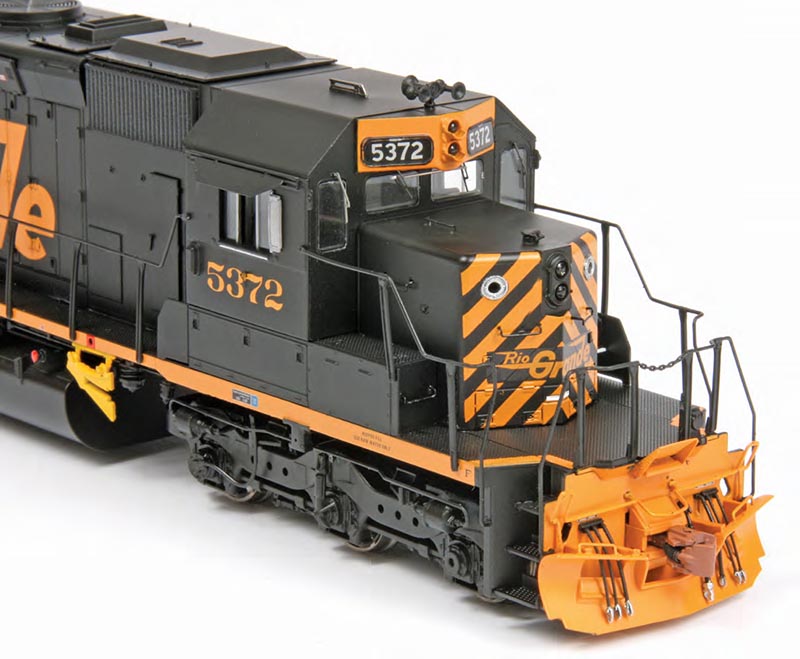 ScaleTrains.com replicates road and production phase characteristics on its Tunnel Motor model. D&RGW 5372 reflects the prototype’s Phase I characteristics with 81-inch short hood and its use of a Mars signal light in the nose-mounted headlight. Separately applied details are numerous, including: wire hand grabs; flush-fitting window glazing; wiper blades; the appropriate Nathan M3 horn, and Sinclair “ice skate” antenna on the cab roof; MU and train line air hoses plus loop-style coupler cut levers, and EMD low snowplow on the pilot; and the early style MU electrical receptacle mounted in the pedestal atop the end platform.

Extensively tested by Southern Pacific, the SD45X’s increased cooling capacity did little to relieve the overheating issues experienced in tunnel operations, for the radiator and its air intakes were still located at the top of the carbody, as was prominent on all EMD locomotives of the period. Perhaps oblivious to these two roads’ experience with the Hydros a decade earlier, EMD engineers looked rather to its competition for inspiration; General Electric’s current U-boat model, the U33C, drew its cooling air in through grilles located lower in the carbody and then used fans to push the air up into the radiators mounted above. So EMD designed sheet metal hoods that could be retrofi tted around the radiator compartment of the SD45, which then allowed the cooler air to be drawn in from near the walkways. Successfully tested on three units in early 1971, Southern Pacific would apply similar hoods (eventually referred to by railfans as “elephant ears”) to an additional nine units that same year.

With EMD’s introduction of its “Dash 2” upgrades, including hi-adhesion HT-C truck, to its diesel lineup in January 1972, and learning from its work with SP, the builder offered its new SD45-2 with optional “cooling modification equipment” for use in tunnel/snow shed operations, designated the SD45T-2. Like the design of GE units, the air intake for the radiators was positioned just above the walkway level, with three fans used to push the cooling air up through the radiator cores located horizontally at the top of the hood. Successful from the get-go in tunnel operations, SP and its Cotton Belt subsidiary would place eight orders with EMD for the SD45T-2 between 1972-1975 for at total of 247 units.

D&RGW 5394 shows some age, but still looks great as it gets some sun at Knoche Yard in Kansas City, Mo., in March 1986. The nearest tunnel to this northeast Kansas City location might be at Vale on Rock Island’s crossing of Missouri, abandoned by this time, on the southeast side of town. Though bought for their ability to handle the challenges of air supply in tunnels, Rio Grande’s SD40T-2s saw use across the system and at time far away from tunnels. Following Union Pacific’s merger with Missouri Pacific in the early 1980s, Rio Grande gained access to Kansas City via Mopac’s Colorado Eagle line. D&RGW power awaited the next call in those days at what was The Milwaukee Road’s yard. — Kevin EuDaly collection

Putting aside the known high maintenance costs and fuel inefficiencies of the 20-cylinder 3,600-hp prime mover used in the SD45 and its Dash 2 successors, horsepower application was another factor taken into consideration by both SP and D&RGW by the early 1970s. For high-speed freights, the top end 3,600-hp of the SD45 was well suited, but for a diesel-electric designated for low-speed helper service, such as in hauling coal, the more reliable 16-cylinder 3,000-hp engine of the EMD 40-series locomotives was all that was required. SP already began placing orders for the SD40T-2 variant in mid-1974, long before the final order of SD45T-2s was even delivered, while additional on-line coal traffic persuaded D&RGW management to opt for the 3,000-hp Tunnel Motor later that same year.

Between June 1974 and July 1980, Southern Pacific would receive a total of 239 SD40T-2s across 11 orders, including 10 Tunnel Motors assigned to Cotton Belt. The roster included 84 units, generally numbered in the 8300-series, equipped with extended “snoot” noses (initially 116 inch and later 123 inch) to house Locotrol equipment for radio controlled helper service, while the balance of the fleet sported standard noses (88 inches in length) and numbered in the 8200, 8400, and 8500 series. In turn, D&RGW placed its first of five orders for the SD40T-2 in 1974, with the initial 15 units delivered by EMD in October of that year. By March 1980, the road had amassed a fleet of 73 tunnel motors total, numbered 5341–5413. All Rio Grande units came equipped with the short nose (initially 81 inches and later 88 inches).

Outside of those units equipped with Locotrol operations, SP’s SD40T-2s were pretty much used system wide and by the early 1980s, with radio control helper service being gradually phased out, the long-nosed Tunnel Motors joined their brethren in general freight operations. Despite the fact that its SD40T-2s were purchased for coal train service, Rio Grande’s fleet of Tunnel Motors was actually the most numerous locomotive type on the road at the time, so it’s no surprise they too were employed in general freight operations. This would also be the case after the two neighboring roads merged in September 1988, and again when the combined fl eet joined Union Pacific’s roster some eight years later in the mid-1990s. By this time, there had been a few Tunnel Motor casualties, but the bulk of the SD40T-2s built — 231 from SP and 69 from D&RGW — were still hard at work… 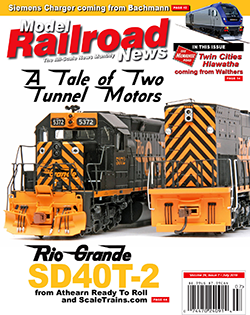