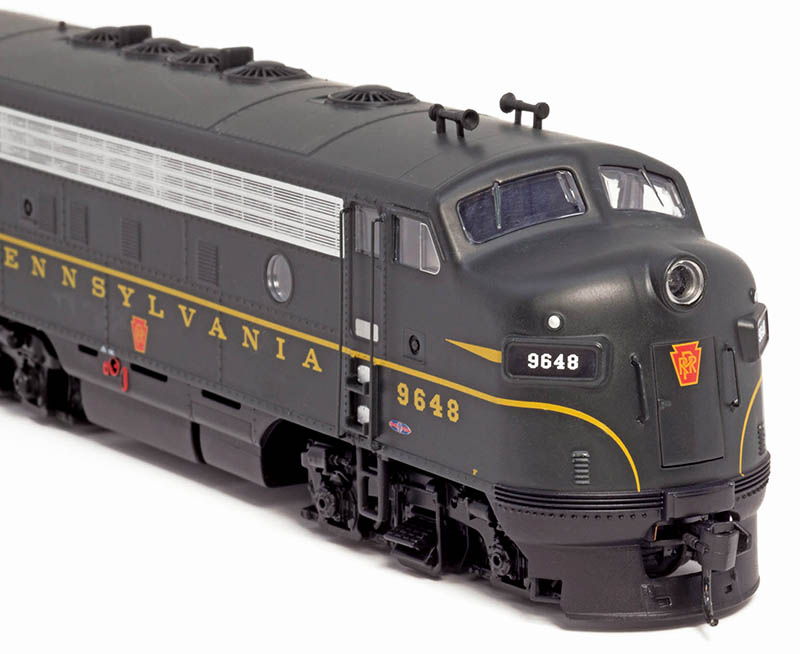 Walthers attempts to strike a balance with its Mainline HO-scale F7 models that provide some separately applied details and a Proto-level drive mechanism with a modest suggested retail price.

Walthers Mainline series has been rolling out all-new tooling HO-scale diesel locomotive and freight car models at a fast pace across the last few years. The manufacturer’s motive power focus in this growing category has jumped around from contemporary General Electric GEVOs and Electro-Motive Division (EMD) SD70ACe offerings to vintage first generation power such as EMD’s F7 and GP9. Rolling stock offerings also include a wide range of eras from contemporary covered hoppers to recently announced steam era boxcars and reefers.

Pennsy’s F-units
General Motors’ introduced its first F-unit not long before the U.S. entry into World War II and it was a landmark locomotive. The success of the FT series and the needs of railroads during the war years saw fleets of these pioneering diesels on most major railroads. There were exceptions and Pennsylvania Railroad (PRR) was an example of a major Class 1 railroad that not only didn’t roster Electro-Motive’s FT, these early F-units reportedly didn’t even receive the opportunity to demonstrate for the road. However, Pennsy would not stay out of the F-unit owner’s club for long.

This F7A includes a single headlight and dynamic brakes. Check out other Walthers Mainline F-units and you’ll see some variations to these details to better match prototypes offered in HO.

Pennsy’s first F-units were F3s delivered in early 1947. During EMD’s production of F3s, the builder was working on an improved unit with a new version of its traction motors and more robust wiring. These features were among the attributes planned for the F3’s successor model. The F3’s 1,500-hp rating would stay for the new F7, which is somewhat uncommon as often more horsepower was the usual basis for EMD to introduce a new model name. The enhancements provided EMD’s F7 with increased tractive effort and improved longevity in continuously operating the unit’s new D27 traction motors. Some railfans separate these F3s into the unofficial “F5” grouping. PRR’s roster included approximately 80 F3As and 55 F3Bs with 25 examples falling into the F5 grouping.

Though Pennsy skipped FTs and came late to F3s (EMD production started in mid-1945 and the road’s fi rst F3s went to work in early 1947), the road bought EMD’s F7 series from its 1949 introduction. Deliveries of F7s helped Pennsy dieselize its operations. The road’s F7s did main line priority freights, including providing power for the innovative “TrucTrain” intermodal services of the mid-1950s. Additionally, Pennsy F7s served as helper power, and did local chores and branch line jobs. The F7A collection totaled approximately 120 examples with about 75 booster or F7B units on the road’s roster. 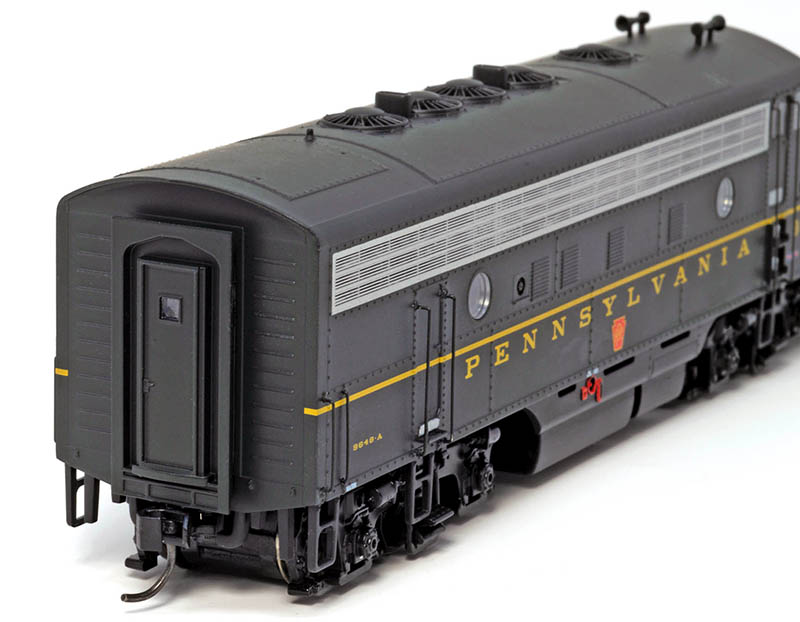 For its price, this F-unit does a very good job of replicating the prototype and providing a solid performing model. The separate painted wire handrails are great, but they appear to stand off the surface of the body a bit much for my tastes.

The 9000-series numbering originally given to Pennsylvania Railroad F-units changed to 1400-series numbering in the mid-1960s. The change in road numbers was part of the road’s preparations to merge with New York Central. By early 1968 and the arrival of Penn Central, the numbers of F3s were down greatly. Those early F3s went to EMD on orders of second generation Geeps. Pennsy’s F7s at the time of the merger amounted to 176 units. According to Paul K. Withers’ research in his sixth volume of Pennsylvania Railroad Diesel Locomotive Pictorial books, 138 F7s received 1400-series numbers and went on to work for Penn Central.

Maninline PRR F7A
The prototype for MRN’s review sample, PRR 9649, joined the road’s roster in early 1950. The HO reproduction is an economically priced release and Walthers does not promote this offering as possessing road-specific features.

For this standard DC model’s selling price of a bit more than $100, there are no Train Phone antenna details on the roof, and other finer details are absent. However, this model makes for a great starting point for those wanting to try out their skills. You might want to consider upgrading the details yourself with diesel detail kits available through manufacturers like Bowser (from their line of Cal-Scale parts). 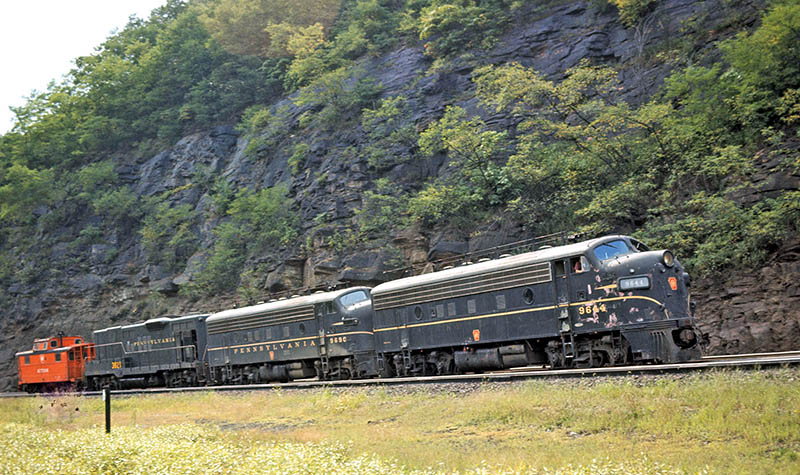 Every railroad has famous railfan locations. For Pennsy enthusiasts, you’d be hard pressed to come up with a more scenic and exciting train watching spot than Horseshoe Curve in southwestern Pennsylvania. Rounding the famed curve is a helper set made up of two Pennsy F-units, a rare GP7B, and caboose. The pair of F-units sports Brunswick Green with single-stripe livery. Lead unit PRR 9644 has all but lost its Pennsylvania name on its side, while trailing PRR 9690 matches up to the scheme and lettering Walthers provides for its HO-scale Mainline F7A —Jim Boyd photo, Kevin EuDaly collection

What you receive out of its box with no work is a fully assembled plastic shell that does provide a good representation of EMD’s famous bulldog-nosed F7 diesel locomotive. The contours of the round nose and the slant of the windshields make or break plastic F-unit toolings. My feeling is this effort captures the classic appearance well. The only shortcomings I find on this model are rather plain fans on the roof.

A look inside the plastic shell of this HO-scale F7A model reveals details about what’s on the exterior of this Walthers Mainline release. You’ll see the rooftop exhaust stacks and fans are solid moldings. The skirting along the sill is part of the tooling and number boards are solid and do not offer an opening through the shell for illumination, neither do the classification lights on the nose. Clear window inserts snap into the shell and present a very good flush-fitting appearance for the “glass” on this F-unit.

They do their job, but lack a finer appearance and dimensional look of higher priced F-units; but again, this isn’t a higher priced F-unit. The angled number boards on the nose are good, but suffer somewhat in their protruding frame area. To release cleanly and easily from a mold, it’s my understanding that hard lines such as the goggle-like frame of an F-unit’s number board is a challenge for plastic shells. Examine F-units with separate number boards and those, like this F7, with number boards included on the shell. You’ll see a slightly fanned out or smoothed over appearance to the number board frame and its meeting point with the surface of the nose. It’s such a commonly accepted practice for models that I find it passable on models that employ this path and it’s a great perk on those more expense efforts F-units that make this detail separate. 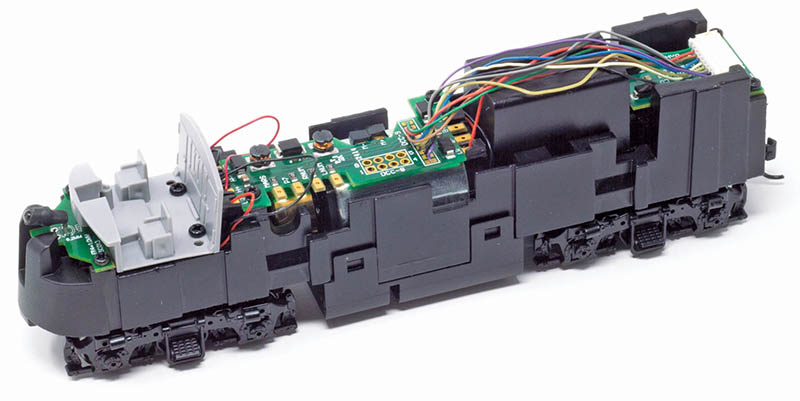 Though priced at only $129.98, with its shell removed this Mainline F7A mirrors the innards of high-end Proto-series F-units. Getting access to the drive is very simple. You remove the screw holding the front coupler and gently pry the skirting of the shell away from the frame.

The fully assembled Mainline release comes with a high-quality drive mechanism that matches the performance of the more expensive Proto-series F-units in Walthers’ line. The quiet and powerful motor includes dual flywheels and resides in a die-cast metal chassis. The provided Proto MAX metal knuckle couplers are secured to the frame by small screws and come housed in plastic pockets. Coupler height checked out fi ne on this sample. You’ll find the location of the coupler pockets allows for close coupling between units, which is always high on the want list for any F-unit model.

Watch future editions of MRN for Chris Atkins’ coming review of Walthers Mainline F7s decorated for the Milwaukee Road and Northern Pacific, for an in-depth presentation on the drive mechanisms and performance of this series of HO-scale F-units. 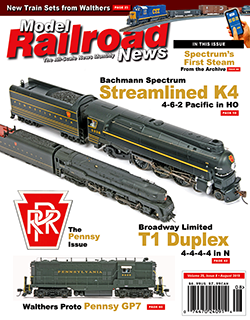 This review appeared in the August 2019 issue of Model Railroad News!