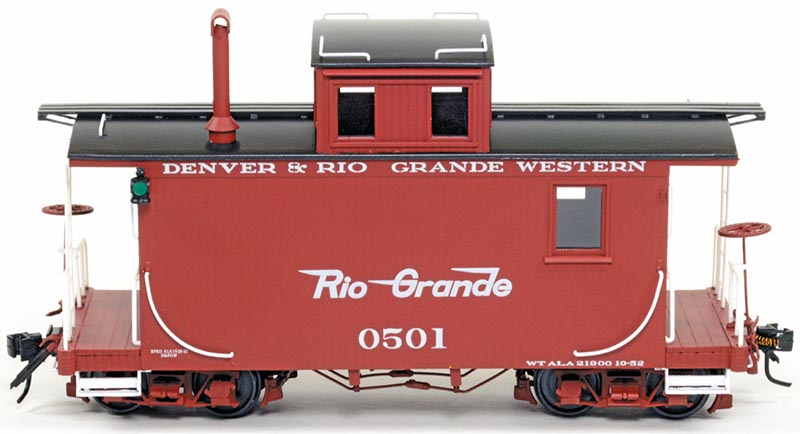 Accucraft has produced a very fine model of a most popular prototype. Comparing it to photos of the real thing, the company seems to have captured the feel of the Rio Grande short caboose very well. This would make a superb addition to any O-scale narrow gauge railroad. 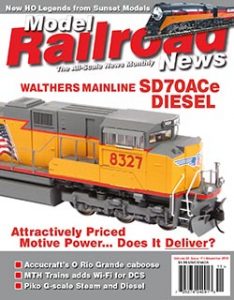 Advancement in systems, processes, and techniques is generally a good thing, but the demise of the caboose is taking things a bit too far. Fortunately, modelers using any period before the 1980s can attach a caboose to the end of any train — long or short, transcontinental or local peddler —and the train looks like it should Accucraft Trains has just introduced a narrow gauge Denver & Rio Grande Western (D&RGW) narrow gauge caboose for modelers in both On3 and On30, the only difference being the wheel gauge. This model represents one of the original 12 short cabooses D&RGW used throughout its system.

The Prototype
From 1871 to 1923, D&RGW built slightly more than 100 cabooses with many of these going through various modifications and rebuilds over their years of service. Jackson & Sharp built the first four cabooses in 1871, and the railroad’s shops constructed the rest of the fleet between 1876 and 1885.

Most of these cabooses were removed from service before 1903, the last of them surviving to about 1914, sometimes after one or several rebuildings. In 1903, new Interstate Commerce Commission regulations required air brakes and automatic couplers on cars, and it became urgent to replace the old four-wheel cabooses. Based on the model of a first caboose rebuilt in 1892, at least eight four-wheel cabooses were then extensively rebuilt between 1904 and 1918 or so and received, among other modifications, air brakes and new trucks to replace their original wheels. 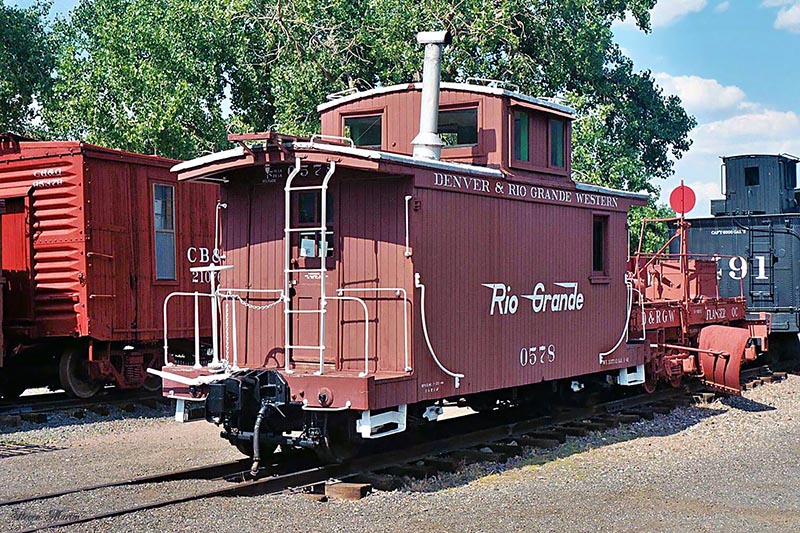 The short caboose modeled here was built in the Rio Grande shops and followed standard practices found in cabooses throughout the country. This car served as the train’s nerve center, supplying an office for the conductor and space for the rest of the crew, which, in the case of the narrow gauge, was usually one brakeman. The conductor had a fair amount of paperwork to complete, and the caboose provided space for this work. In addition, the cupola allowed crew members to observe the train while in motion. The caboose provided a space for bunks, a stove to fight the cold Colorado winters, and various cabinets, water tanks, and so forth to meet the crews’ needs.

In 1886, D&RGW built the first 12 examples of its standard short caboose with four-wheel trucks. The numbering system for these began with No. 0500. This series is the subject of Accucraft’s new model. Illustrated is DR&GW No. 0501, which still exists today as a small rental unit in Durango, Colorado. D&RGW did not number this caboose series consecutively, and the railroad built 27 short cabooses over the years with the last being numbered 0588. Members of the caboose fleet underwent rebuilding and repairs to the point that none were identical after a few years of service.

The 0500-series caboose measured 22 ft. over the sills, with a wood underframe and weighed 11,800 lbs. They rode on Thielson four-wheel archbar trucks. Research reveals that each of the first 12 cabooses cost $720. It is interesting to note that used cabooses are advertised for sale at present beginning at $10,000 with some exceeding $30,000. Surprisingly, there are still a large number of the short cabooses that survive today, most of them still residing in the state of Colorado. For a list of surviving cabooses and where to find them, visit www.drgw.org. 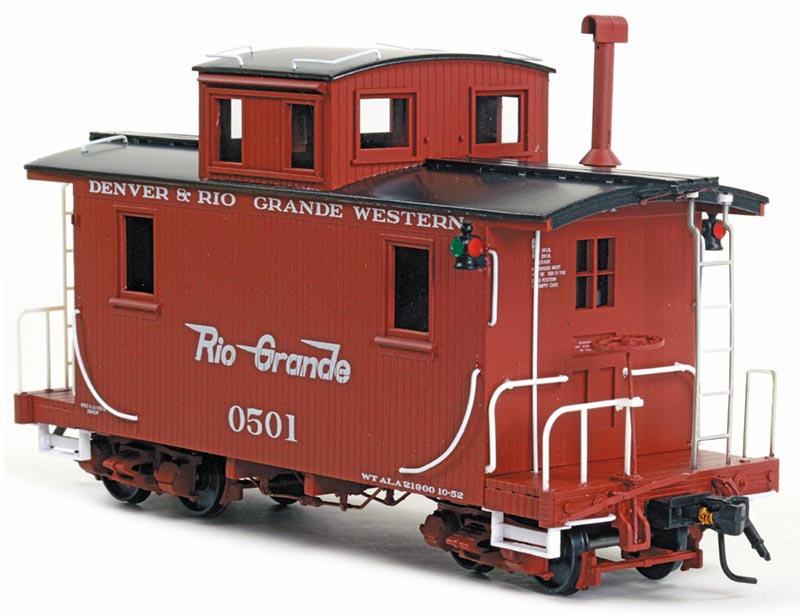 Separate details are plentiful on Accucraft’s caboose and include fully decorated lanterns, as well as white painted railings and grab irons. The model arrives fully assembled and carries a $109 suggested retail price.

Accucraft’s Model
Accucraft’s model is presented in a sturdy white cardboard box, with the caboose held in place in a standard clear plastic clamshell container. This supports the model very well; I noted no damage when removing the model from the packaging.

The model has an excellently detailed plastic body, roofs, and underframe. The main body is attached to the frame with three small screws on the underside. The sides have the individual boards modeled, with the name board extended out from the side. The window frames are very delicately molded, with a single window on one side and two windows on the opposite — standard on this series of cabooses. Lamps at the two rear corners and finished in black with red and green-painted lenses complete the model’s look. All the windows are glazed with clear acetate.

The roof sections have a slight texturing to simulate the tarpaper roof, and the two roof side surfaces have three plank walkways, with small supports leading back to the roof fascia boards. An excellently designed smokestack emanating from the caboose’s inside stove adorns the roof.

The one-piece frame has a simulated wood rear platform and the various fittings that are found on the prototype. The bottom has the individual board detail, with four heavy longitudinal beams and queen post beams. The truss rods are molded in plastic with center turnbuckles. The model features correct brake rodding, along with the air tank and brake cylinder. Stirrup steps appear at each corner of the frame, with simulated bolts holding them in the proper position. 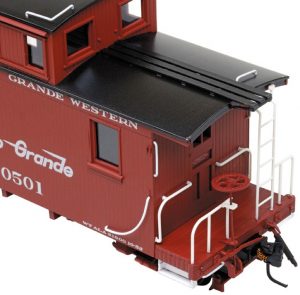 Clear window glazing is provided, adding to model’s realistic appearance. This view illustrates the detail in the brake wheel and on the face of the end platform of this impressive O-scale release.

Accucraft’s short caboose model comes fully assembled with all the vari- ous handrails, lamps, brake lines, couplers, and brake wheels factory-installed. Curved handrails on each corner of the body go into body-molded fittings. On both rear walls, the handrails are set out from the body with rods to the correct width, allowing the crewmembers’ hand to encircle the railing. The end beam railings are attached to the ladders on one side and have the support for the brake wheel staff on the opposite side.

At the bottom edge of the body end sill, there are handholds bent to the correct shape. On the roof, handrails appear at the top of each ladder, and 90-degree formed handholds adorn each corner of the cupola roof.

Each end platform has brake wheel and shaft, with the shaft going through the ratchet and pawl to the lower staff bracket. The end sills also are fitted with a coupler lift bar, nut/bolt/washers for the truss rod ends, and an air hose with shut-off valve. The couplers are in plastic boxes and are the correct height when measured using a Kadee coupler gauge.

The four-wheel trucks are beautifully detailed with the individual leaf springs, journal covers, and bolt detail on the top and bottom of the beams. There are inside hangers for the properly modeled brake shoes. The wheels and axles are steel, and the trucks roll very smooth. The trucks are held to the bolsters with tiny screws and washers.

The model comes fully painted in the appropriate D&RGW colors with white lettering. The paint finish is excellent and does not hide any of the fine detailing on the various components. The sample illustrated has very nice lettering in white, with crisp edges to the lettering. Even the tiny lettering on the bottom edge of the body is very crisp and easy to read. The very black roof contrasts with the white handrails. With a bit of weathering, the model would take on an even better appearance. Though they may look bright and shiny in a rail museum, these cabooses quickly took on a much-used patina in regular service.

Accucraft’s short caboose model is available in several paint schemes. The Flying Rio Grande shown in the photos comes in three numbers: 0500, 0501, and 0524. There is also a D&RGW with the road’s Moffat Tunnel herald (0528), as well as the unique green member of the fleet (0579), and a Rio Grande Southern version (0401). The green D&RGW caboose received its interesting livery for the 1950 film, “A Ticket to Tomahawk.” For those who want to letter the caboose for a freelance railroad, Accucraft offers its model unlettered in caboose red.

Accucraft has produced a very fine model of a most popular prototype. Comparing it to photos of the real thing, the company seems to have captured the feel of the caboose very well. This would make a superb addition to any O-scale narrow gauge railroad.