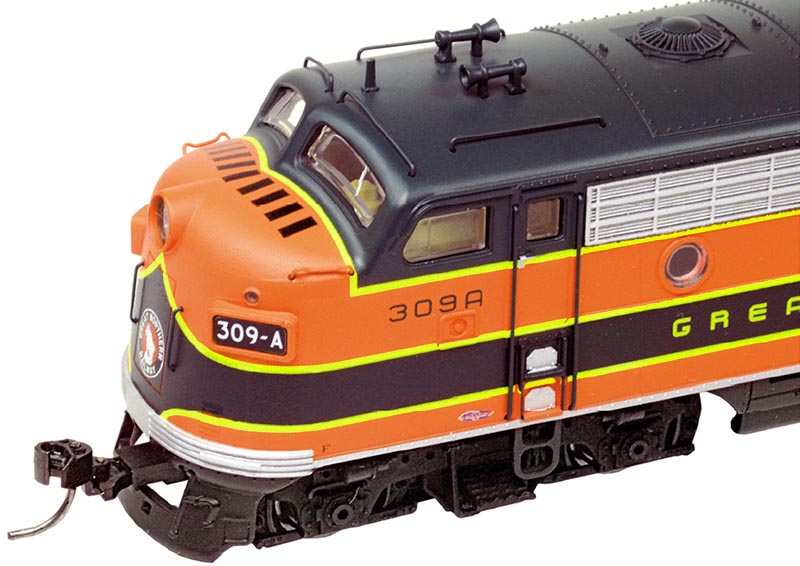 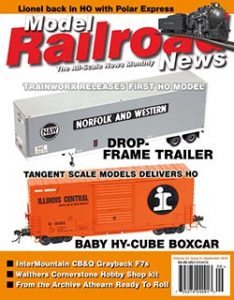 By the MRN Staff

Great Northern Railway (GN) rostered Electro-Motive Division (EMD) F-units in a variety of models from early FTs through F9s, plus the 1960s F45 to be all-inclusive. The road opted out of EMD’s six-axle passenger diesel locomotives for the most part. The road owned 13 examples of E7As built in 1945 and went back to the locomotive manufacturer in the 1960s and ordered a total of 14 of EMD’s SDP40s and SDP45s. F-units saw use in freight and passenger service. Select members of Great Northern’s F-unit roster received equipment (steam generators) for passenger pulling, while others were typical freight haulers. With respect to F7 models, Great Northern bought 11 F7As and 12 F7Bs for passenger duties (class P-3-7-AB) and 51 F7As and 35 F7Bs for freight use (class F-3-7-AB).

Unlike some roads that painted power for passenger service different than its freight units, GN applied its colors and lettering uniformly across its equipment roster. The dress for F-units was Empire Builder orange and green with yellow striping and lettering. The official colors were Omaha Orange and Pullman Green. This scheme debuted on FTs in the spring of 1941. As happened to many early diesel liveries, this intricate decoration saw a simplification in the early 1960s. The yellow striping went away with orange and green meeting near the middle of unit’s sides. This simplified Empire Builder dress remained in use until 1967’s change to “Big Sky Blue,” which lasted until the Burlington Northern merger in 1970. 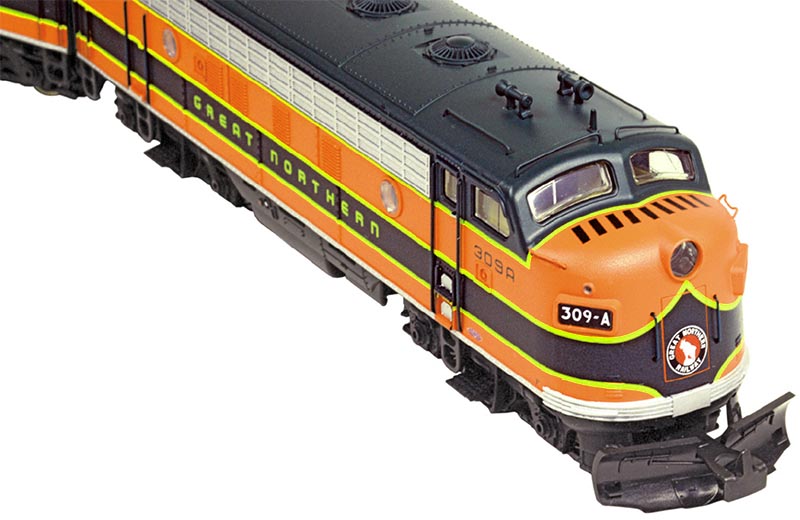 Included in the package is this optional snowplow. This detail item is simple to install. Removal of a screw on the provided coupler allows it to swap out with this plastic plow. This pair of digitally controlled and sound-equipped metal F7A models carries a $529.99 suggested retail price.

For 2016, Marklin delivers its HOscale F7A diesel locomotive models in Great Northern’s Empire Builder dress. The release provides a powered pair with a number of separately applied details. This new offering is an AC release and operates only on European-standard systems. The units come arranged noses out with a screw-mounted drawbar and wires permanently connecting them.

NEM couplers are standard issue; however, some revisions may be made if desired. A snowplow is included in the box, and the owner may select to install this item. Kadee’s NEM-to-knuckle couplers will fit into the pockets on this model if you’d like to change the appearance to a more realistic one. 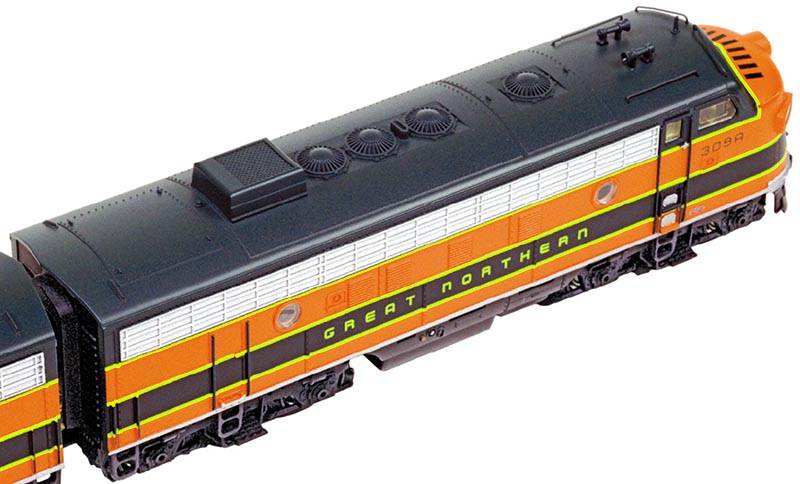 The near-flush clear windows in the cab include etched windshield wipers on the front panels, and a side vent vertical line is etched on the forward side cab windows. Portholes include clear window material too. Marklin provides separate metal grab irons on the top of the nose of both F7As, as well as four grab iron/handrails on the cab roof. The nose includes separate handrails on each side of the door of this single headlight F7A pair. The access to the cab has separate metal handrails, as does the two areas along the rear of the unit. The cab roof details include a pair of single-bugle air horns (one pointing each way) and a cone-style radio antenna. Farther back, each F7A includes a box winterization hatch covering the rearmost radiator fan.

Marklin’s Empire Builder paint scheme looks great. Colors appear to exhibit authentic hues, the striping thickness looks good, and the well placed lettering is sized appropriately. Decoration includes an oval EMD builder’s plate and silver applied to the sill and around the unit’s front pilot on its top edge. The radiator grilles include a handsome silver finish that brings out their appearance well. The shell for Marklin’s F7A model is metal, and the box reports these releases came from Hungary.

The AC-system includes Marklin’s mfx+ digital system for operation. Both F7As in the set are powered. Look closely at the images of the underside of the trucks and you’ll spot traction tires. The factory-installed traction tires add to the pulling power of these models. In addition to digital control, Marklin provides its HO-scale F7A in this offering a system capable of reproducing prime mover audio, as well as horn, bell, and other sounds. Illumination includes directional headlights, number boards, and classification lights. Warm-white LEDs provide the lighting on this release.

The company shows no DC-version coming for the Trix line for this Great Northern F7 offering. Trix will deliver HO-scale Baltimore & Ohio and Santa Fe Mikado steam locomotives for DC operation in the near future. Marklin will deliver a set of Great Northern coal hoppers later this fall to its HO line. The three-car hopper set (#45661) carries a $134.99 suggested retail price.