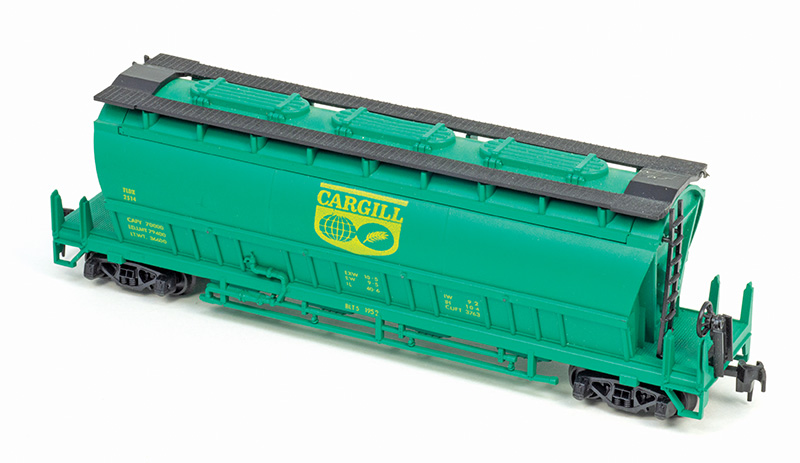 The HO-scale version of AHM’s Flexi-Flo came in several liveries, none resembling a known prototype. The original six decorations for this model include Cargill (pictured), Enjay Plastics, Frisco, Great Northern, Gulf, and Shell.

In discussing and preparing the March 2021 edition of Model Railroad News, contributing editor Tony Lucio and I felt not presenting the vintage AHM model was out of the question. It needed to be in this issue with Rapido Trains’ stellar new rendition of American Car & Foundry’s (ACF) Flexi-Flo hopper.
Long-time hobby enthusiasts will instantly recognize this curious looking freight car. Many, or most, likely have or have had an example in their collection and/or operating on their model railroad layouts at one time or another over the years.

This interesting effort deserves more elaborate treatment than will be presented in this “From the Archive” installment. Plans are underway for a series of articles, in MRN’s sister publication HO Collector, documenting the peculiar prototypes depicted in plastic by Roco of Austria for AHM’s line.

At the time of its release (late 1960s to around 1970), this model likely attracted many curious looks from hobbyists. Was this a foreign prototype? What kind of “Center Flow” is this car? AHM marketed both HO and N offerings as simply “Center Flow Hopper,” which didn’t provide ample and/or accurate information. Select decorations did correctly include ACF’s name and/or logo, but omission of the same from a New York Central release with “Flexi-Flo” lettering likely left many scratching their heads on what this car was supposed to be. While not all freight cars produced for one scale saw release in another, Roco did produce this model in HO and N and AHM cataloged both versions. The N-scale tooling enjoyed more circulation with Eastern Seaboard Models in the 1990s offering a run with prototypical road names, according to an internet source.

For its day and level of quality being aimed for, the model isn’t terrible. You’ve likely seen or have tried yourself to make something more presentable out of this model. Be watching for the coming series of AHM freight car articles (with this model among them) to appear in HO Collector (hotraincollector.com).