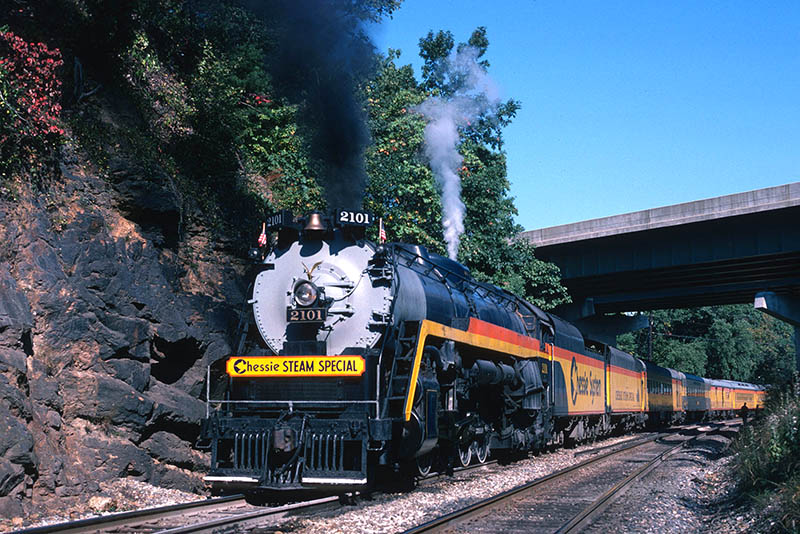 This October 1978 would be among the final runs for No. 2101 on the Chessie Steam Special. The T-1 4-8-4 Northern prototype came from Reading’s roster. Kevin EuDaly collection

The history of Chessie’s T-1 Class 4-8-4 steam locomotive is a short one. Originally appearing on Reading Railroad’s roster, No. 2101 went to a scrapyard in the 1960s, following its regular service life that began in 1945 and ended in 1955. The locomotive avoided retirement and was a standby in the pool for Reading steam excursions, though it reportedly never saw use for those trips. The locomotive was first pulled from its would-be final resting place for American Freedom Train use in the 1970s. No. 2101 got another call for service as the point of the Chessie Steam Special. Wearing Chessie System dress — replicating the road’s livery introduced in 1972 with the formal merging of Baltimore & Ohio, Chesapeake & Ohio, and Western Maryland — this revived eye-catching steam locomotive enjoyed only two years of public exposure starting in the spring of 1977. A roundhouse fire ended No. 2101’s operating life in March 1979.

Ahead of the prototype, hobby companies quickly saw merit in applying Chessie System colors to existing steam locomotive models well before the real example arrived in early 1977. The following are just a few of the products decked out for Chessie System steam service available over the years.

Perhaps not the usual consist you might have seen behind Chessie’s steam locomotive in the 1970s, but TYCO often took “artistic license” to new heights. Shown is 1975’s Mammoth of the Rails train set with a 4-6-2 Chessie System steam locomotive.

The first hobby company on the scene with a Chessie System steam locomotive appears to be TYCO with the arrival of a Chessie System 4-6-2 Pacific in the company’s 1975-76 product catalog. Heading up TYCO’s “Mammoth of the Rails” (#7338) train set, this 4-6-2 Pacific decorated for Chessie System provides a more elaborate coating of the road’s color scheme than you’d find on the prototype locomotive with colors covering the boiler and tender. TYCO carried over its “4301” road number, used on most all Alco Century 430 diesel releases, for its Chessie System steam locomotive. This offering also sold for many years as a separate sale item (#212-03) in TYCO’s catalog.

There are some curious connections you can make for Bachmann’s 1979 Chessie System 4-8-4 HO offering. The model follows a GS-4 class prototype, which was decorated for American Freedom Train service for the U.S. Bicentennial in 1976. The T-1 class 4-8-4 that served as the original Chessie System steam locomotive in 1977 did a stint as No. 1 for the American Freedom Train. However, the rivet-counter dots won’t connect to give a seal of approval on a GS-4 in Chessie paint.

Another HO Chessie System steam locomotive offering is somewhat closer to the prototype, matching the 4-8-4 wheel arrangement, but following Southern Pacific’s GS-4 class prototype versus Reading’s T-1 of the real deal. Made by Kader, this long-serving GS-4 debuted in Lionel HO’s 1970s line. Lionel HO sold GS-4 Northern offerings decorated for American Freedom Train, Southern Pacific (Daylight), and Western Pacific, but not Chessie. Following Lionel’s departure from the HO category after 1977, this GS-4 model and the GP30 diesel made by Kader moved to Bachmann’s catalog in 1979. Bachmann brought over the Daylight-scheme Southern Pacific and Western Pacific offerings and added Chessie System (#674). These early Bachmann HO Northern steam locomotives carried $55 retail prices. Though its 4-8-4 is a different type than the Reading prototype, Bachmann did include the prototype’s 2101 road number on its model. 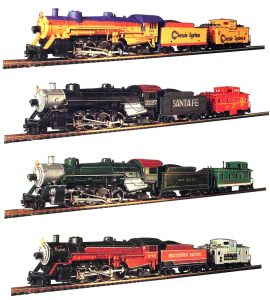 Prolific model maker Mehano was the source for IHC Hobby’s Chessie System HO-scale steam locomotive models. IHC Hobby imported this Mikado, as well as a similar version of the 4-6-2 Pacific in Chessie dress that originally appeared in AHM’s line.

This model moved to Broadway Limited Imports line in more recent years and came as a Paragon 2 release (#2140). The manufacturer also did American Freedom Train livery for its T-1 class Northern. BLI’s latest incarnation for this tooling is a series of Chesapeake & Ohio-lettered examples with Paragon 3 Rolling Thunder electronics. This year’s Broadway Limited production includes a group of auxiliary water tenders. In that group is the 1980s Chessie System Safety Express (#4797) water tender.

Among the unique Chessie System HO-scale static steam locomotive models are the ones marketed by Monogram and later Con-Cor. Replicated in 1/87th size, this series provided static plastic HO steam locomotives. Under research currently for a feature in a future edition of HO Collector, the series of static steam releases included a 4-6-4 Hudson carrying road number 312 and sold as a Chessie System release. The kit provided all-plastic components molded in color, as well as decals. The kit returned from Monogram in its “Metal Master” collection with chrome plating and decals for the Chessie System on its tender. From Monogram, you’ll find these kits branded as “Snap Tite” releases. Con-Cor’s offerings branded them “Desktop Collectors Series.” In addition to Con-Cor and Monogram, Revell marketed these HO steam kits for a time too, and their origin, at least for the New York Central Hudson kit, may date to the early 1960s and Rosebud Kitmaster models imported from Europe by AHM. 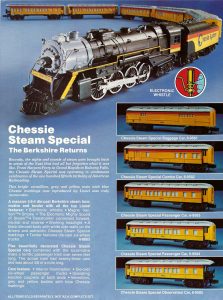 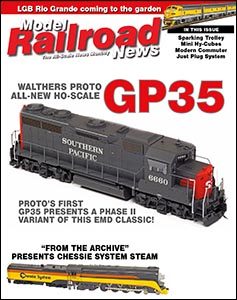 Read this feature in the July 2017 issue of Model Railroad News!