It may be difficult to believe, but some short line railroads have begun moving from older Electro-Motive Division (EMD) locomotives (like GP40s and GP38-2s) to larger, contemporary six-axle locomotives. Athearn has brought some of these heavy-duty Class II and Class III locomotives to market, including this review’s example from Washington State short line Tacoma Rail. I believe this is the second mass-produced HO-scale model of a Tacoma Rail locomotive, with Atlas having made a Genset (Tacoma Rail 2100) in HO a few years ago.

Tacoma Rail’s Mountain Division is an interesting piece of Washington State railroading which could easily be the focus of an article on its own. The line was built as Tacoma Eastern Railroad in the early 1900s, utilizing financing from The Milwaukee Road. The line ran from Tacoma up to the Mount Rainier foothills at Ashford and Morton, Wash. The road was fully absorbed by The Milwaukee Road which would operate this trackage until 1980. After The Milwaukee Road shut down its western operations the line was owned by Weyerhaeuser as its Chehalis Western Railroad, which ran log trains to the Port of Tacoma. Weyerhaeuser sold the line to the City of Tacoma in 1996, that would contract operation of the line to Tacoma Rail a couple of years later. The city originally wanted to use the line for passenger trains to Mount Rainier, but the multiple attempts lasted a short time and were unsuccessful. The line past Eatonville is leased to the currently mothballed Mount Rainier Scenic Railroad, the longest operating attempt at passenger trains in contemporary times on this railroad. Tacoma Rail is a short line railroad and a division of Tacoma Public Utilities, historically called Tacoma Municipal Belt Line. Tacoma Rail primarily operates within the Port of Tacoma (the “Tidelands Division”), but also operates freight trains on the Sound Transit-owned Lakewood Subdivision and the Mountain Division.

Tacoma Rail SD70ACes 7001 and 7002 were originally EMD demonstrators (EMDX 1211 and 1212), painted in a blue and gray scheme. These demonstrators were built for trial use by BNSF and are a unique variant of SD70ACe called SD70ACe-P4. They are like General Electric’s ES44C4 in that not every axle possesses a traction motor, as typically found on this type of locomotive. While the ES44C4 lacks a traction motor on the middle axle of each truck, the SD70ACe-P4 does not have traction motors on the axles closest to the fuel tank. BNSF rosters 20 examples of SD70ACe-P4s (BNSF 8500 through 8519). Tacoma Rail and BNSF are the only railroads to purchase this SD70 variant model. 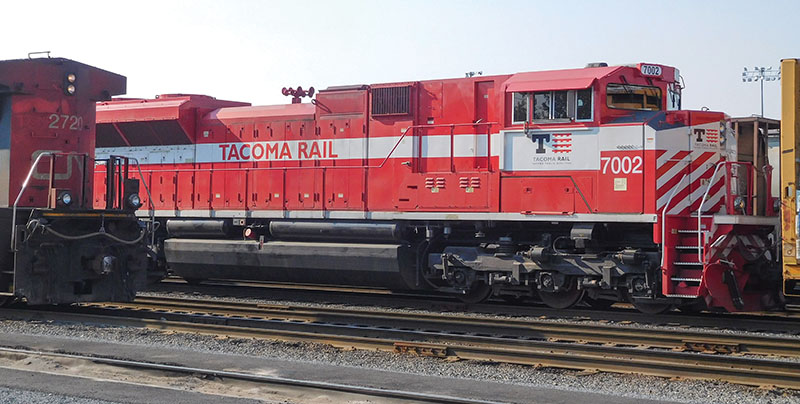 Tacoma Rail’s two units were repainted (in late 2014) into the road’s striking red and white paint scheme at Progress Rail’s now-closed Tacoma shop (located across the road from Tacoma Rail’s headquarters in the Port of Tacoma), and would enter service shortly after. There are rumors of Tacoma Rail transferring operation of the Mountain Division to another railroad in the next few years, so the future of the two SD70ACe diesels is somewhat unknown.

Athearn’s SD70ACe traces to the never-released Tower 55 SD70ACe from the early 2000s. Athearn acquired this tooling, at the same time as the former Tower 55 ES44AC tooling, to use as the basis for their Athearn Genesis SD70ACe. Several runs of this model have been produced since the first version in 2010 and Athearn has refined the model several times to keep its features in league with contemporary standards. This recent run includes multiple new upgrades and a rebrand as a Genesis 2.0 model. In 2019 Athearn began using the “Genesis 2.0” name on some models, beginning with the new EMD SD90MAC-H. It appears that this branding will be short-lived, as Athearn’s updated branding simplifies its higher-detail models back to just Athearn Genesis.
This SD70ACe was marketed as a Genesis 2.0 model and includes enhancements to match. Lighting features have been updated to match other high-end HO diesels, bringing LED illuminated number boards and ground lights to this run. In addition to the new ground lights and number board lighting, the usual headlights and ditch lights are also illuminated with LEDs. The main detail addition is etched, see-through walkway steps in place of the solid plastic steps from previous runs. 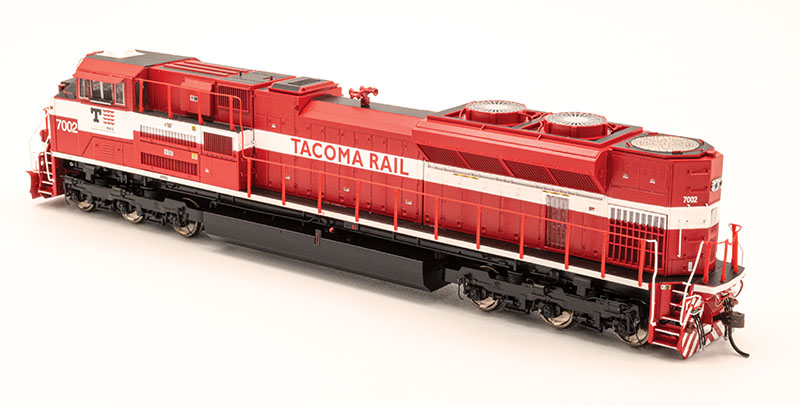 The details carried over from past production runs are what modelers expect from models the level of Athearn Genesis. All the usual separately applied detail parts are included: grab irons, lift rings, windshield wipers, and more. A neat part added to recent Genesis locomotives are the rubberized MU hoses on both pilots. These hoses are flexible like actual MU hoses and are less likely to get damaged than plastic MU hoses. Another neat feature, dating to the original 2010 run, is the removable cab roof which is held on with magnets. This allows an easy way to see the well-detailed cab interior or to add details such as crew figures.

While the general details of this model and its prototype are like the BNSF units, Athearn did include the one visible difference between Tacoma Rail’s two units. Both units have different types of horns; Athearn has accurately included a five-chime horn on this model, 7002, and a three-chime horn on Tacoma Rail 7001. Tacoma Rail’s paint scheme and logos are accurately replicated. While the shade of red is difficult to photograph accurately due to its appearance in varied lighting, Athearn’s choice of color appears accurate compared to what I have seen on these locomotives in person. It should be noted that this sample has a couple of issues with the pad printed logos, scratches on the “T” on the nose, and missing lettering on the bottom of one of the cab logos, that are visible in this article’s photos. I purchased a second model, road number 7001, for my collection and have seen a few other examples in person that did not have these issues, so they are likely isolated to our example.

Our sample is a Digital Command Control (DCC)-ready model, which is equipped with a 21-pin decoder plug, but DCC sound models equipped with SoundTraxx Tsunami 2 were also produced in this run. There is plenty of space for a speaker if a sound install is desired, either using the factory location in the frame, or inside the rear radiator housing. I installed a Bowser (bowser-trains.com) dual-sugar cube speaker inside the radiator of the model I purchased, but Scale Sound Systems offers a drop-in speaker designed for recent Genesis models (Athearn Genesis/RTR “Dual-Cube” Universal AHGS-UNI1-RC1) that would also be a suitable choice.

It is great to see models produced for my local short line railroad, and Athearn has done a great job replicating these distinctive locomotives. Tacoma Rail is an interesting railroad with a fleet of nearly all EMD power, making it a great subject to model. Athearn already has tooling for many other units on the roster, including the six MP15ACs and two GP38-2s, so I can only hope that Athearn or another manufacturer will make more Tacoma Rail models in the future. 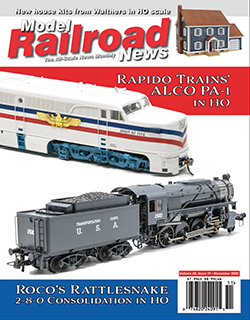