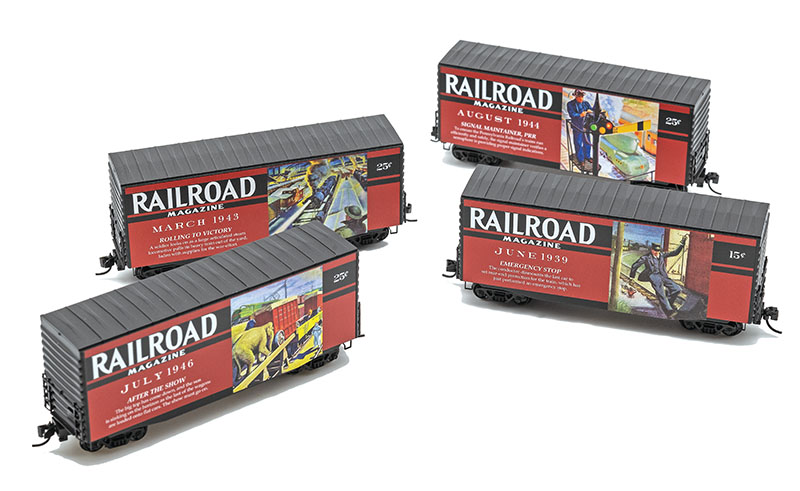 Each release in Micro-Trains’ N-scale production of Railroad Magazine “Days Gone By” series comes fully assembled and includes a month and date with article name and brief description, along with an excellent reproduction of a classic illustration from the publication.

As you read this, Micro-Trains Line will have released the majority of its Railroad Magazine “Years Gone By” collector series models. Like other collector offerings from Micro-Trains, this group of N-scale (Z scale is also offered) releases has enjoyed a monthly addition to what will total a dozen members of this fleet. The company selected a modified version of its 40-foot Hy-Cube boxcar model to decorate with a rotating collection of appealing artwork sourced from Railroad Magazine’s history. The tooling includes most features found on regular issue versions of this excess-height boxcar with the exception of a door. To provide a smooth area for reproduction of the base design and inclusion of the intricate color art, the sliding door is gone from this Hy-Cube. The boxcar ends include separate short railings (this is a modern freight car lacking tall ladders and rooftop running boards, as per prototype). The model’s underframe is stock Micro-Trains with a plastic frame (which includes thin, scale-size stirrup steps on the corners) with metal weight, roller bearing trucks with plastic wheels, and the manufacturer’s own plastic knuckle coupler. The design (repeated across the series) presents a black car with deep red sides, white lettering presenting the Railroad Magazine name, and each release including a month and year associated with the artwork and brief description of the story feature being highlighted. These are very attractive N-scale models with this color scheme and Micro-Trains’ work reproducing the multi-color artwork panel on the right side of the models (the entire look is duplicated on each side of this Hy-Cube boxcar for all offerings).

ABOVE: Micro-Trains’ canvas for this series is the company’s 40-foot excess-height boxcar. This version of the tooling has the door removed to allow for a smooth billboard-like side for the mural presentation. The models include separate end railings and brake wheel, and ride on roller bearing trucks with knuckle couplers attached.

Started almost before there was the hobby of railfanning, Railroad Magazine was a pulp magazine (started in 1906 but with roots reaching to the 1890s and The Railroad Man’s Magazine) loaded with stories of railroading. I knew of Railroad Magazine growing up in the 1970s; in my dad’s literature were a few copies that had some prototype data of importance. My real exposure though wouldn’t come until about a dozen years ago. While on vacation in Colorado, my dad and I visited a group of narrow gauge modelers in Idaho Springs, Colo., and a box of old Railroad Magazine issues was offered to me. I remember sitting at our cabin on that trip and being entertained by the tales of railroading. The magazine ceased publication in 1979 and was acquired by Carstens and incorporated into Railfan, become Railfan & Railroad, which continues today under the ownership of White River Productions.