The as-delivered look of Santa Fe’s GP20s is among Atlas’ N-scale releases. The road bought the most GP20s of any railroad and operated a roster of 75 units that saw decades of service.

Atlas introduces a Master edition N-scale GP20 diesel locomotive with the arrival of six road names in the first production of this four-axle model for the company’s line. The fully assembled GP20 release comes in two versions from Atlas. The tooling at the core of this N-scale GP20 model originated in Life-Like’s catalog around 2000. When Walthers acquired Life-Like model train assets in the mid-2000s, this GP20 offering moved to the Milwaukee-based hobby company. Atlas obtained a majority of Walthers/Life-Like heritage N-scale models and this GP20 returns to market under a new name with several enhancements.

ABOVE: With the inclusion of the road’s famous shield herald on the cab sides, this Union Pacific GP20 would fit in a late 1970s and later era scene. UP’s GP20s worked for decades and always wore Armour Yellow, but saw several lettering variations across the years of work.

The turbo-charged GP20 was a transition offering from General Motors’ Electro-Motive Division (EMD) from its first generation products of the post-World War II era to the 1960s and later second generation models. Developed in part as a response to Union Pacific’s experiments with turbo-charging EMD Geeps in its roster, this four-axle unit developed 2,000 horsepower from its 16-cylinder 567 prime mover. Production began in late 1959 and lasted into 1962 with 260 examples sold to U.S. railroads. 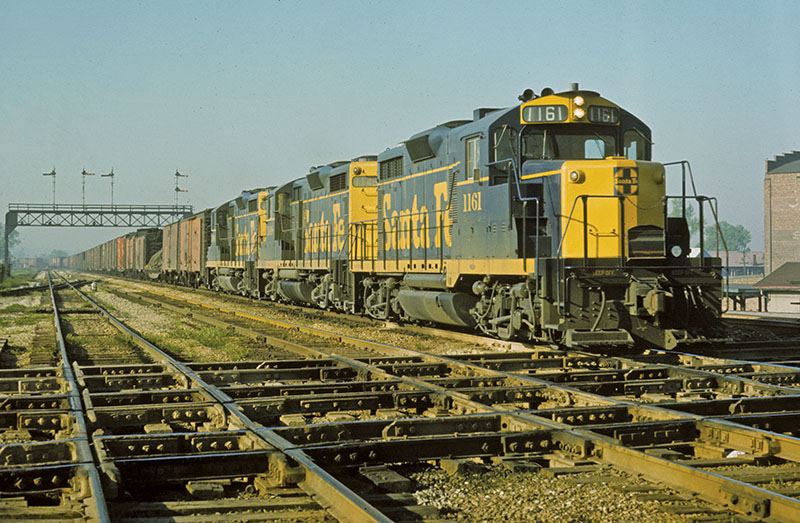 ABOVE: This was the look of priority freight trains on Santa Fe’s eastern end of its transcontinental Chicago to Los Angeles main line in the early 1960s. Teams of GP20s, such this 1966 view of Santa Fe 1161 and two more examples raced trains across Illinois and Missouri. — Jim Boyd photo, Kevin EuDaly collection

Santa Fe owned the most GP20s with its fleet of 75 units (originally numbered 1100-1174) with the next largest collections working for Chicago, Burlington & Quincy (36 units); Great Northern (36 units); Southern Pacific (34 units with its subsidiary Cotton Belt acquiring 20 units); and Union Pacific (30 units). This four-axle Geep was largely in service to Western U.S. roads with New York Central’s 15 examples (6100-6114) being the sole Eastern residents… and the only GP20s produced without dynamic brakes. While EMD’s GP20 helped make the low short hood a standard feature of the diesel builder’s products going forward, not all roads bought this style. Notably, Great Northern’s GP20s (2000-2035) came with high short hoods, as did the 10 examples working for Western Pacific (2001-2010). 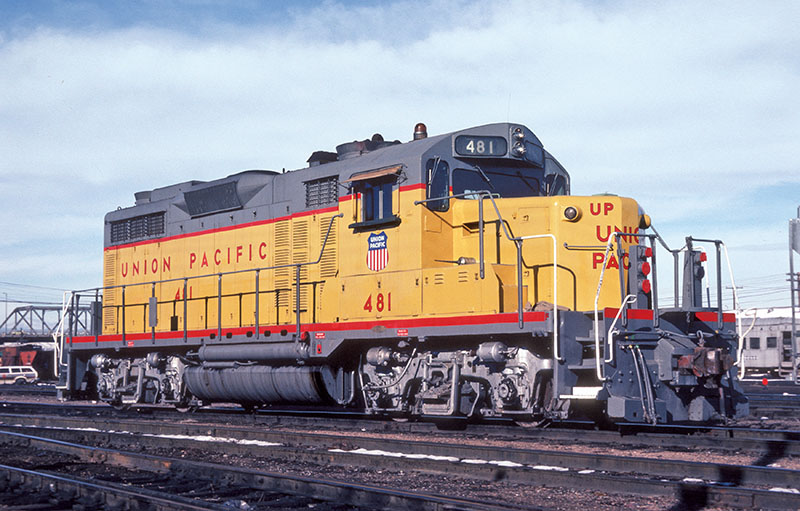 ABOVE: EMD’s GP20s enjoyed long careers with the U.S. railroads that bought them. Around its 20th birthday in this 1980 view, Union Pacific 481 displays the decoration matching the look Atlas selected for its three N-scale GP20s produced in this release for UP. — John Tudek photo, Kevin EuDaly collection

Landing in early 2021, Atlas’ Master N-scale GP20 releases include Burlington Northern, Conrail, EMD Demonstrator, Santa Fe, Southern Pacific, and Union Pacific. Multiple road numbers are available for each road name. Those looking for a canvas for a custom paint and lettering project will find a limited supply of undecorated GP20s available in both Silver and Gold editions.

ABOVE: Details on Atlas’ models include dynamic brake blister on all roads with the exception of Conrail editions (as per prototype). Conrail operated non-dynamic brake GP20s it obtained from Penn Central, which received them from New York Central.