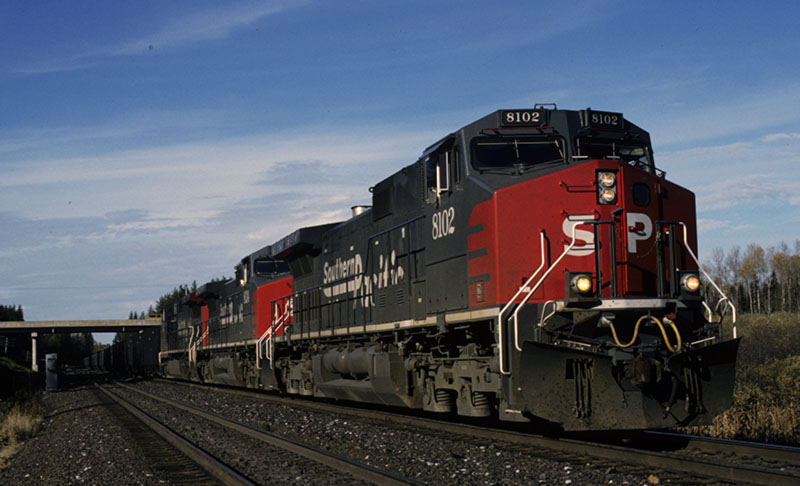 Among Southern Pacific’s (SP) last new motive power acquisitions was a collection of 101 examples of General Electric’s (GE) C44-9W.  This six-axle diesel locomotive saw introduction to North American railroading in 1993 with production continuing into 2004. GE would sell more than 3,600 copies of this unit with the largest fleets at work on BNSF and Norfolk Southern. Smaller rosters included around a dozen each at work for BC Rail; Forescue Metals Groups of Western Australia; and Quebec, North Shore & Labrador Railway. 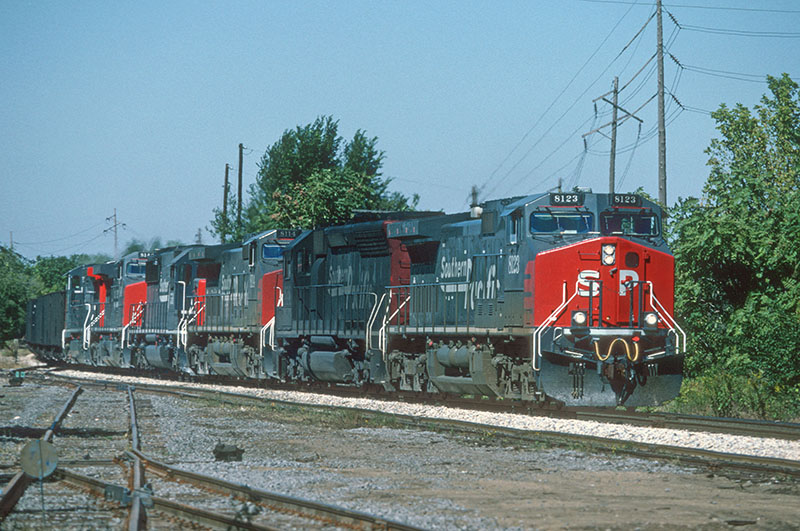 ABOVE: Southern Pacific 8123 leads a mix of six-axle units into Venice, Ill., in the St. Louis area on train MNGVC in September 1994. SP gained ownership in the early 1990s of the former Illinois Central Gulf line between Chicago and St. Louis after the failure of Chicago, Missouri & Western, which bought this route in the late 1980s. Today, this is line includes high-speed rail sections and hosts Amtrak service and Union Pacific freights. – Daniel M. Schroeder photo, Kevin EuDaly collection

Southern Pacific numbered its C44-9Ws in the 8100-series (8100-8200) and the units came dressed in the famous “bloody nose” combination of red and gray with the late era speed lettering presentation of the road’s name that came about following the 1988 merger with Rio Grande. Within a few years of delivery, Union Pacific (UP) took over SP and these 101 C44-9Ws joined a group of 40 similar units purchased by UP. Union Pacific’s C44-9W roster expanded with the coming of Chicago & North Western to the sprawling system and its 130 examples of C44-9Ws. Many SP C44-9Ws remained in gray with red nose paint for many years in service to Union Pacific.

ABOVE: Part of the hobby company’s Rivet Counter series, ScaleTrains.com’s HO-scale C44-9W looks great in Southern Pacific livery and is loaded with detail.

This 16-cylinder brute was a major success for diesel builder General Electric and led to contemporary Evolution Series GEVO models with the ES44DC replacing this Dash 9 in the company’s catalog in 2005. The C44-9W’s HiAd truck sideframes are a spotting feature. While most received DC traction motors, GE did produce an AC variant (AC4400CW) for Canadian Pacific and CSX.