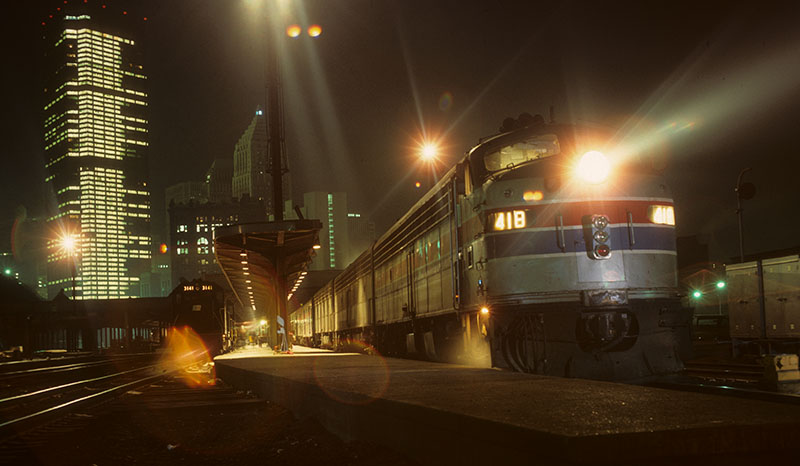 General Motors’ Electro-Motive Division (EMD) produced several incarnations of A-1-A equipped passenger locomotives during the developing years of diesel technology beginning in the 1930s. From sleek EA units operated by Baltimore & Ohio (and Alton Railroad) and onward through E1s to E6s, the majority of these entries in the E-unit series exhibited more unique features styled to the tastes and needs of buying railroads. With the 1945 introduction of EMD’s E7 model, a more standardized appearance took hold for this style passenger diesel locomotive. In the spring of 1949, EMD refined the E-unit design and increased horsepower output from 2,000 to 2,250 and introduced the E8. Produced in A- and B-unit versions, nearly 500 E8s served North American railroads. Featuring a similar exterior, EMD moved to the 2,400-hp E9 in 1954. Though production of E9s went on to the beginning of 1964, sales for this final E-unit model did not compare to E8 or E7 numbers with less than 150 (A- and B-units) sold. 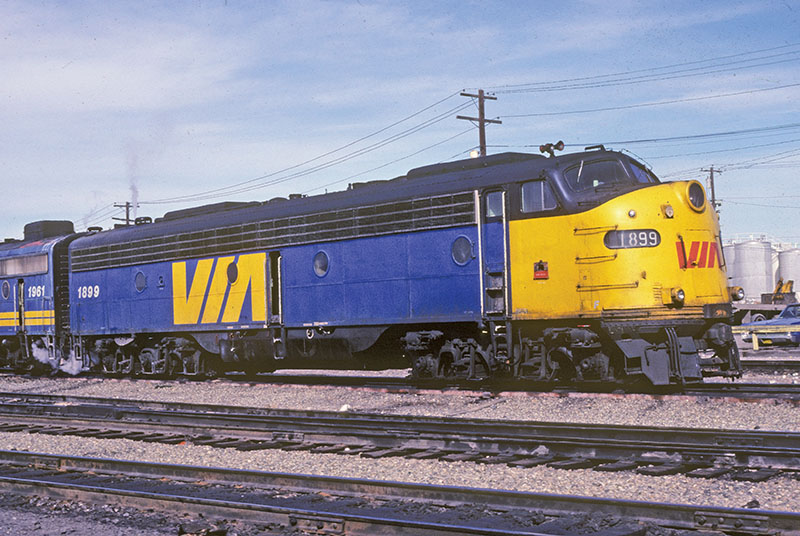 ABOVE: VIA Rail 1899 shows a veteran E8A still on the job in 1981. Note the added MU receptacle on the nose between the headlight and number board and ditch lights added above the pilot. — Richard Yaremko photo, Kevin EuDaly collection

Railroads across the U.S. and Canada used E8s for passenger duties for both long-haul and shorter (corridor and commuter) runs. The biggest fleets of E8s served on Chicago, Burlington & Quincy; New York Central; Pennsylvania Railroad; and Chicago & North Western. Smaller collections of E8s found themselves on roads from Class 1 Santa Fe (with 8 examples including rebuilds of early E1s) down to Gulf, Mobile & Ohio’s single E8 (rebuilt from an Alton EA). In Canada, only Canadian Pacific rostered E8s and that trio (1800-1802) were purchased for a joint service with Boston & Maine. In the late 1970s, VIA Rail Canada would receive two of Canadian Pacific’s E8s. 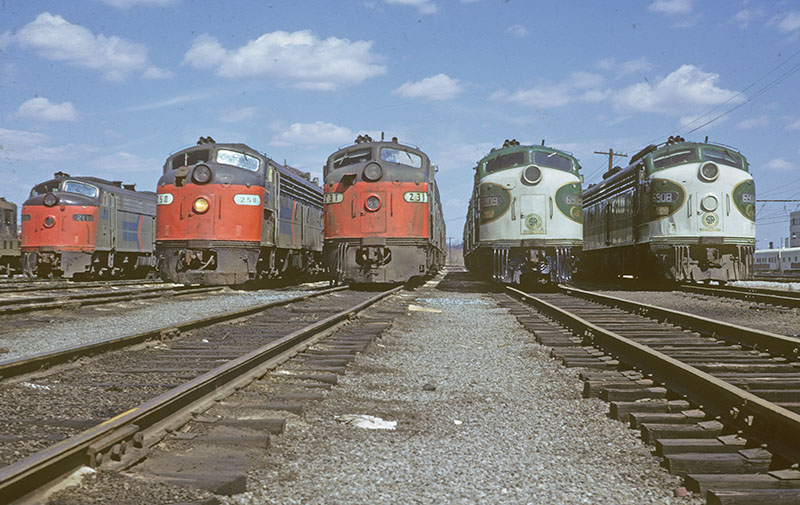 ABOVE: E-units on every track in this 1970s scene! E8s served as the backbone of Amtrak’s first years. Examples came from several participating roads, and thus variations abounded (as this view shows). Southern Railway was a road that stayed out of Amtrak (until 1979) and it operated E-units.  — Kevin EuDaly collection

In 1971, Amtrak assume operations of the majority of U.S. intercity service and the road relied on E8s as motive power during its early years. In addition, the 1970s saw Amtrak holdouts Rock Island and Southern Railway operate their passenger trains with E8s. Commuter operations, such as those in the Chicago area, also relied on E8s through the 1970s.

ABOVE: The first plastic E8 offered in HO scale came from Rivarossi of Italy in the late 1960s and was imported by AHM in North America.

While prototypes went to work in 1949, for HO modelers the first plastic E8A reproduction came in 1967 from AHM via Rivarossi in Italy. An N-scale version of the E8 came from Atlas in 1968. The next 1:87 plastic E8 was produced by Roco in Austria and marketed by Model Power in North America. In the 1990s, Life-Like’s Proto 2000 series introduced an E8 in HO scale, which represented the first effort with separately applied details and a made to a level of contemporary standards. 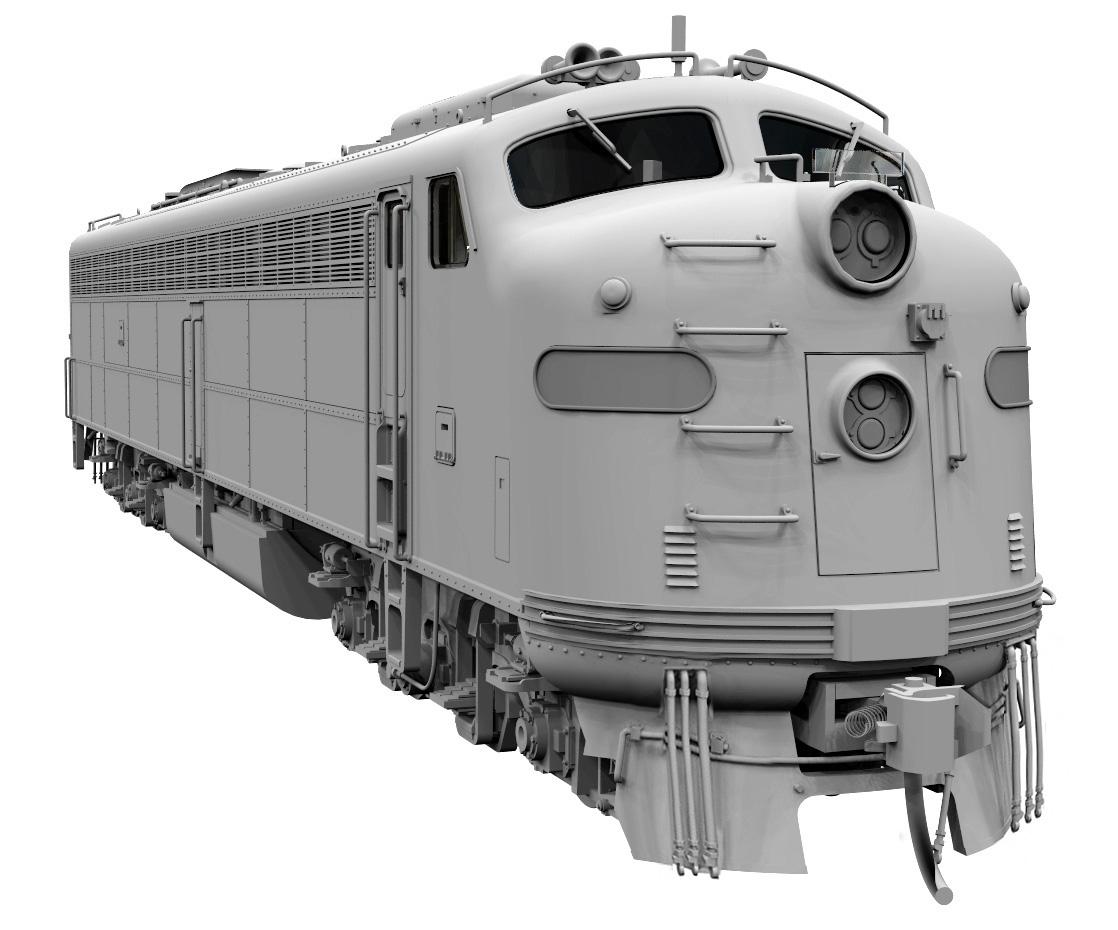 ABOVE: A look at the E8A planned for HO scale by Rapido Trains. Announced Christmas Day 2020, this release will include A- and B-units.

Rapido Trains joins the list of hobby manufacturers to offer EMD’s elegant E8 with its news of the company’s E8 Project. The highly detailed HO reproduction will come in several road names (each with multiple road numbers).