Built by the road’s Topeka Shops, this set of 100 cars saw service from the early 1960s into the late 1970s. This impressive car’s red sides and large herald and Super Shock Control logo are typical of the flashy appearance many U.S. railroads took on for rolling stock liveries beginning in the 1960s.

All Pullman-Standard PS-1 boxcars shared a general design appearance bestowed on them by the popular car builder. I think of these 50-foot boxcars as products of the 1950s, and they were, but research shows the introduction dates to 1949 and production continued to the late 1960s. More than 50,000 examples of this PS-1 boxcar helped establish it as a North American standard and aided in moving the former standard bearer 40-foot boxcar into a lesser position of importance. 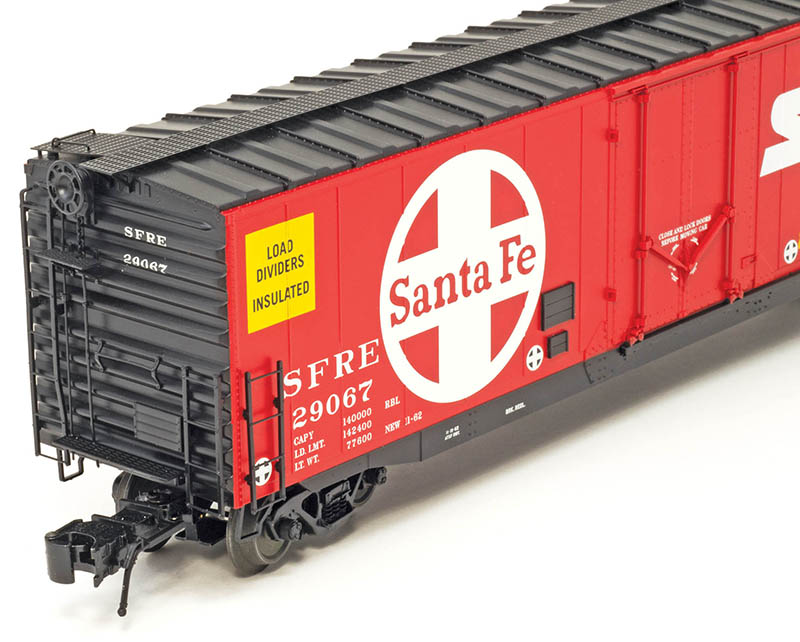 In Atlas O’s efforts, the manufacturer first introduced a sliding-door version in the early 2000s. There is also a double-door version of this boxcar, in addition to this plug-door example.

RBL 50-footer
This PS-1 boxcar model is a plug door example known as an “RBL,” which identifies the freight car as being a bunkerless refrigerator. The “bunkerless” part of the car’s name refers to the lack of storage for ice used in reefers to keep temperatures cold. A more exacting definition might state this is an insulated boxcar able to be loaded with cargo that doesn’t require refrigeration to keep it frozen or really cold, but the items being transported need to be protected from major swings in temperature and humidity during the journey to their destination.

A shipper would require a mechanical refrigerator for transporting frozen fruit juice concentrate across the country, to keep the product from thawing and going bad during a long trip. This RBL-type boxcar would serve to transport glass or canned fruit that didn’t need to be frozen, and would keep it protected thanks to a cushioned underframe. An example might be cases of glass jars containing fruit, such as cherries. You wouldn’t want those cherries crossing the desert southwest U.S. housed inside a general service boxcar in triple-digit temperatures, nor would you want that product rolling through Canada during frigid winter months and possibly freezing.

An RBL boxcar such as this, when the plug door is properly shut and secured, seals the freight car interior. The cargo receives protection from outside elements, not only the mentioned temperature and humidity but also from dust coming in through openings around sliding doors of typical non-specialized boxcar examples. This type of boxcar can maintain the climate conditions present during loading with only a minor fluctuation after a journey of days and thousands of miles.

In addition, Atlas O production runs have twice (2010 and 2012) offered this boxcar model in a Mineral Red scheme with Reefer Orange plug door and black sill lettered for Santa Fe. Those offerings present an older livery from the 1950s with the road’s boxed circle-cross herald. The 2010 model included “The Route of the El Capitan” slogan and the 2012 offering promoted Santa Fe’s top train, the famed Super Chief. While maybe not as flashy as the 1960s Indian Red with large white circle-cross herald, those 1950s era offerings are very good looking with orange plug doors and matching orange “DF” loader and “Insulated” markings on the car. These models also share the SFRE reporting marks. 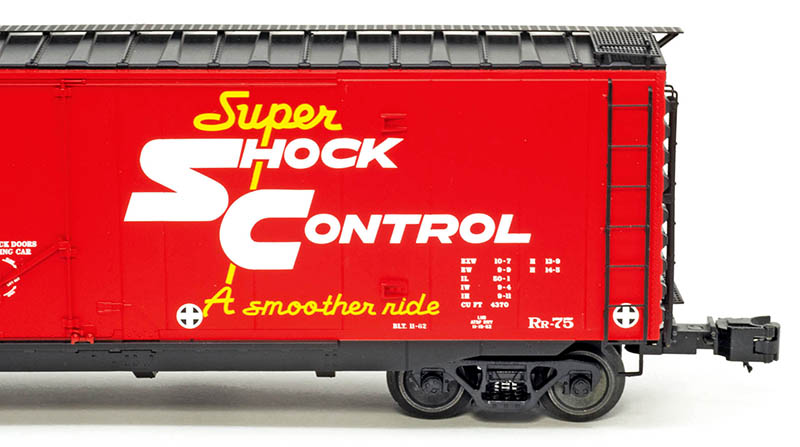 For reference on this and many other types of Santa Fe equipment, I highly recommend the library of publications produced by the Santa Fe Railway Historical & Modeling Society (SFRH&MS). I found reference to Santa Fe’s RR-75 class in Charles Slater’s Santa Fe Box Cars: The Shock Control Era 1954–1995. This is the eighth volume in the SFRH&MS’ “Rolling Stock Reference Series.” The 100 cars (29000–29099) built by Santa Fe’s Topeka Shops, and not by Pullman-Standard as is the case with this O-scale model’s prototype, went to work in 1962. According to Slater, Santa Fe reclassified 76 of the 100 boxcars to its BX-89 class in 1964. The cars originally wore a colorful scheme with black roof and ends, Indian Red sides, and large white circle-cross herald. The special features of this class included load dividers in the interior to secure loads, and Super Shock Control underframe for the promoted “smoother ride” as the boxcar’s slogan proclaimed. The RR-75 survivors of the 1964 reclassification continued to see use into the late 1970s.

Conclusion
Atlas O offers this 50-foot boxcar model, as the manufacturer does with the rest of its 1:48 line, in the buyer’s choice of 2-rail or 3-rail editions. This review featured a 3-rail example. The 2-rail version comes with Kadee-compatible scale-head metal couplers and the boxcar will navigate curves down to 36-inch radius. The 2-rail edition retails for five dollars more than its 3-rail counterpart and carries a $97.95 suggested list price.

This production provided three never-before-offered paint schemes: Bangor & Aroostook, Canadian National, and New York Central. If you’re looking for the announced light blue American Colloid Co. release, it was canceled and not produced. This Santa Fe offering comes with a new road number in comparison to the 2006 production. In addition, Atlas O brought back Great Northern with its eye-catching Glacier Green and aluminum roof livery, also with a new road number. Check with your hobby dealer for availability on this new group of Atlas O 50-foot Pullman-Standard PS-1 boxcar models. 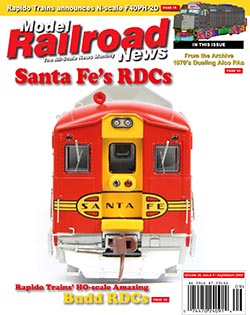 This review appeared in the September 2019 issue of Model Railroad News!