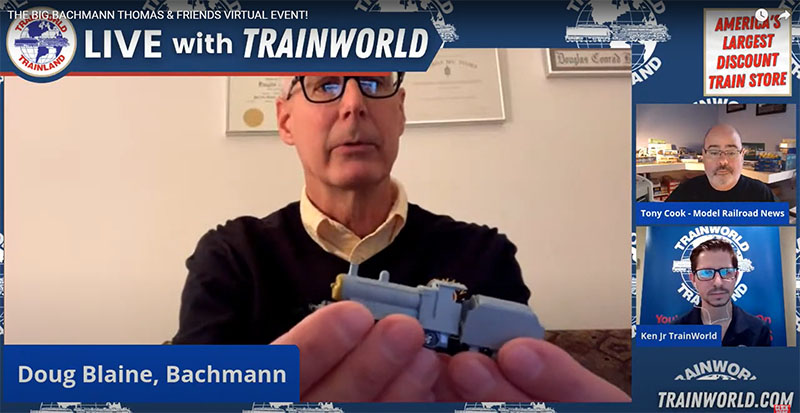 Among coming additions to Bachmann’s line of “Thomas & Friends” releases, Doug Blaine shares a look at an early test sample for the all-new N-scale “James the Red Engine” due in the near future. 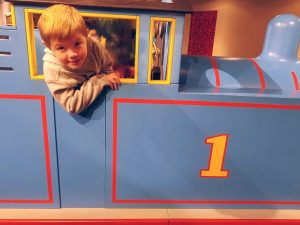 ABOVE: Here’s Jackson Sobeck, who will join with his father to present a look at the first group of Bachmann N-scale “Thomas & Friends” releases in Model Railroad News, doing some field research for his review.

Watch for a review in May 2021’s Model Railroad News by father-and-son team Justin and Jackson Sobeck on the first “Thomas & Friends” releases in N scale from Bachmann. The Sobeck’s will present Thomas the Tank Engine (58791) and Percy the Small Engine (58792), along with coach models Annie (76094) and Clarbel (76095), plus the Troublesome Trucks (77096 and 77097) and new tank cars introduced for the line.

ABOVE: This is Bachmann’s HO-scale “James the Red Engine” release, this model and “Toby the Tram Engine” will be two new additions to the company’s N-scale locomotive offerings for “Thomas & Friends.”

Bachmann’s ever growing “Thomas & Friends” line in HO scale has a recently introduced “Deluxe Thomas & The Troublesome Trucks” set (00760), which comes with everything you need to get starting in model railroading, including oval of snap-together E-Z Track, handheld speed controller with plug-in wiring and power supply… no tools necessary… and a snap-together Quarry Tower structure.

New and coming Thomas the Tank Engine replicas include a DCC “Sound on Board” (58501) with moving eyes and factory-installed Digital Command Control decoder and sound unit (compatible with all HO-scale DCC-equipped model railroading items), the green as-delivered to the Island of Sodor Thomas the Tank Engine with “LBSC” markings and carrying the “70” road number (58739), there’s also a DCC “Sound on Board” Percy the Small Engine (58502).

James releases in HO scale number three with the eye-catching “James the Red Engine” (58743), “Busy Bee James” (58821), and “Origin James” (58822), which presents this famous friend of Thomas as he looked when he came to the Island of Sodor decked out in black with red piping.

Other locomotive offerings in HO scale from Bachmann include “Grumpy Diesel” (58818), a red “Rosie” (58819), and coming to the collection “Daisy” (58820) with moving eyes and “Ryan” (58823), also with moving eyes. Watch TrainWorld’s Big Virtual Event with Doug Blaine of Bachmann to get a peek at an early version of the “Daisy” tooling…

Visit Bachmann online to view the new catalog and see the complete line of model trains, including “Thomas & Friends” releases. 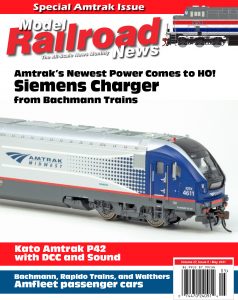