Western Pacific 3557 is one of four road numbers produced for this Genesis GP40-2 diesel locomotive model by Athearn for this 2021 delivery. 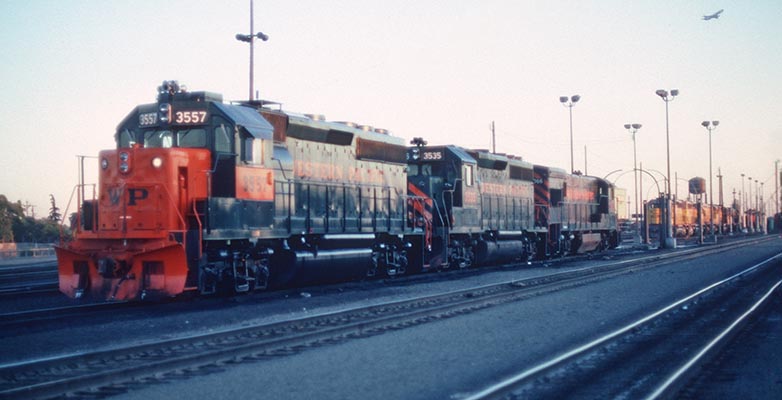 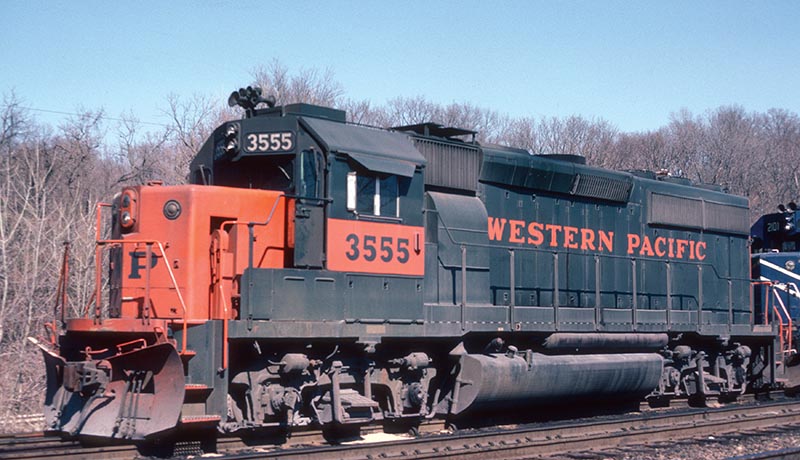 While these WP GP40-2s may be EMD Dash 2 units, you’ll notice the prototype pictures and models show standard Blomberg four-axle truck sideframes. As done by some railroads, Western Pacific opted to stick with this style sideframe rather than the usual shock-absorber equipped Blomberg M-type design. For some buyers, this sticking with an already in use on the railroad truck was a move to reduce maintenance costs by keeping the same design across a run of locomotives or benefiting in cost by having EMD use traded-in trucks on new equipment versus opting for new.

Noteworthy for Western Pacific’s GP40-2s is the livery provided as-delivered and on Athearn’s four road numbers (3550, 3551, 3554, and 3557) in this 2021 production. The units came decked out in Perlman Green with orange and for this collection of GP40-2s, this version of the road’s corporate image was new. Western Pacific utilized this combination of colors from the 1960s through its merger into Union Pacific in the early 1980s, but the design saw variations with some units carrying striping on the ends and other looks that differed from this late era solid orange nose presentation of the scheme. 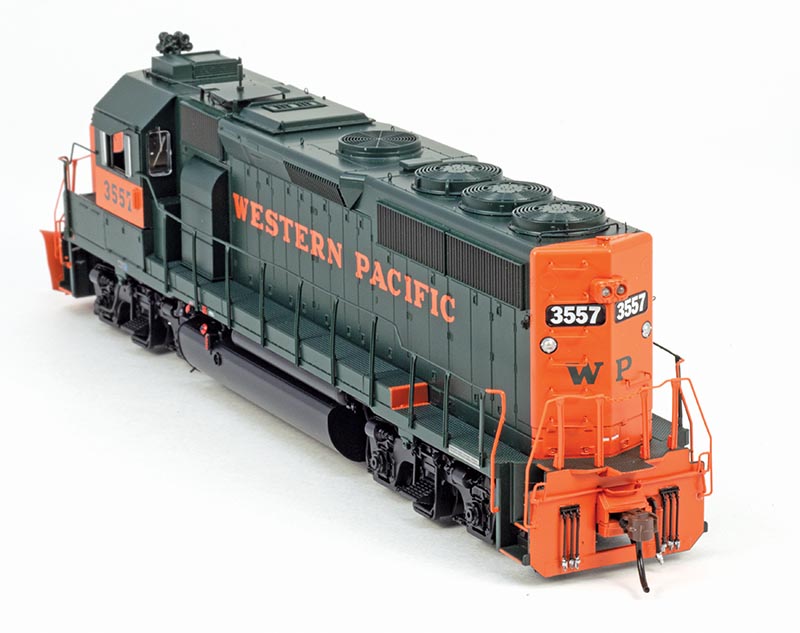 ABOVE: This late era Perlman Green scheme is basic, but attractive with “WP” initials appearing on the nose and end of the long hood. Check out the details on the roof of this Athearn Genesis release. Up front is an accurate air horn cluster, followed by air conditioner unit (a first for new WP motive power at the time), raised plate with firecracker-style antenna with cabling back to the cab, exhaust silencer, and Q-type fans on the radiator section.

This Genesis GP40-2 was a bit of an impulse buy on a recent trip to Midwest Model Railroad in Independence, Mo. I’d gone in to get a decoder and look at recent Accurail kits and couldn’t resist this WP model and took it home (along with a Digitrax 21-pin DCC decoder). Model Railroad News‘ Ryan Crawford is reviewing a recent Atlas Master HO-scale Western Pacific GP40 and I remember liking it quite a bit and thought this GP40-2 would make a good companion in the magazine. Watch for reviews of both models this spring in Model Railroad News from Ryan Crawford and me. I bought a non-sound GP40-2 and will install Digitrax’s DH126MT decoder in the model as part of the review presentation.

ABOVE: The railroad action in Salina, Kan., was south of I-70 and always an attraction on journeys to and from Colorado. This May 1983 view is typical of the mix of interesting motive power on display at the time. WP 3554 provides a not commonly seen back view, with WP GP40 and Union Pacific GP30 sharing the same track. – Warren Sunkel photo, Kevin EuDaly collection

Athearn’s fully assembled HO-scale Genesis GP40-2 comes in standard DC version with 21-pin socket for conversion to Digital Command Control and carries a suggested retail price of $209.98. Models are also available with DCC and SoundTraxx-made Tsunami 2 audio that list for $299.98.