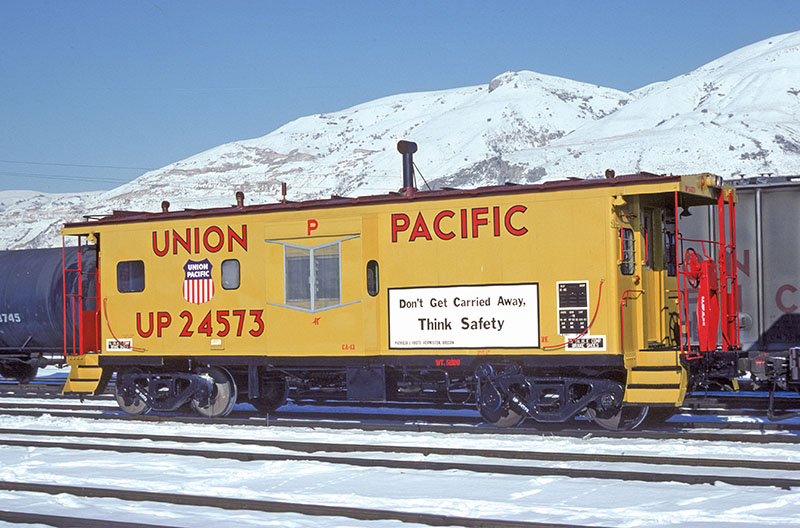 Bluford Shops offers several versions of a common bay window caboose in the manufacturer’s line of N-scale model railroad releases. The series of models replicates a steel bay window caboose first constructed by International Car Co. in the early 1950s. International Car Co., based in Kenton, Ohio, built several styles of waycars for North American railroads and this bay window saw customers that included large Class 1 systems down to short lines in the U.S. and Canada. Early production included roof access ladders on both ends of the caboose and running boards on the roof itself. As the rail industry did away with running boards in the 1960s, caboose fleets followed this trend with many examples constructed before the change modified to a “modern” look (no running boards and lacking ladders). With the demise of the caboose in most service on North American railroading coming in the mid-1980s, the era of the modern caboose is largely two decades spanning the mid-1960s into the 1980s. For bay window examples built by International Car Co., the protruding section along the sides of the caboose saw changes and specialized versions that catered to railroad needs. Bluford Shops currently catalogs multiple production phase examples for its N-scale bay window caboose offerings. The company produces its Phase I model with a single side window on a wide bay section; Phase II style with a single side window on a narrow bay; Phase III design with wider bay section with larger split-panel side window; this review’s Phase IV body; and a half-bay style common to New York Central, its successors, and other roads. 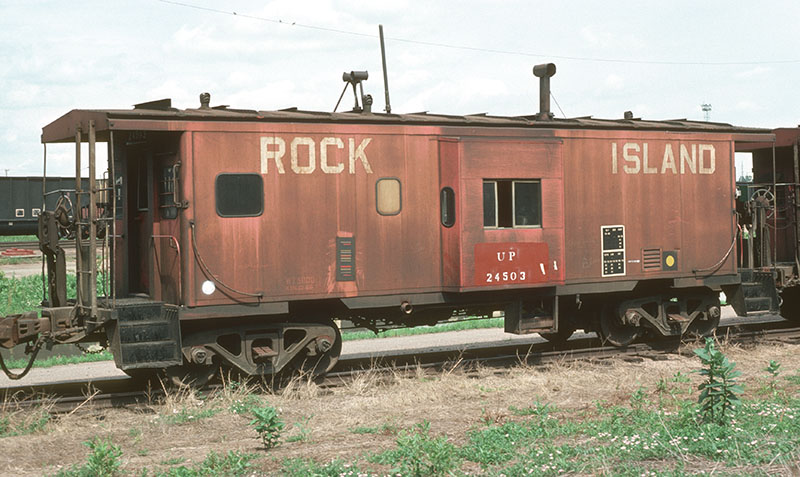 ABOVE: When photographed at Council Bluffs, Iowa. on June 16, 1980, this caboose was 15 years old and looked like it had done some hard time. Financed by UP for Rock Island in the mid-1960s, this bay window caboose came from International Car Co. during October 1966 and was Rock Island’s 175085. In September 1985, this caboose was retired and donated, as happened to many of these waycars after a short stint with Union Pacific. — Joseph R. Quinn photo, Kevin EuDaly collection

Rock Island Refugees
Rock Island, as many know, was set to enter into a merger with Union Pacific (UP) in the 1960s. During the decade-long process, UP stepped in to assist Rock Island by financially backing purchases of equipment (locomotives and rolling stock) that would serve Rock Island until the merger was consummated. The planned pairing received U.S. government approval in the mid-1970s, but was never made official. Rock Island condition continued to worsen and the road ended operations in March 1980. Among the equipment that came to Union Pacific following Rock Island’s demise was a collection of 130 leased bay window cabooses built by International Car Co. between 1966 and 1971. 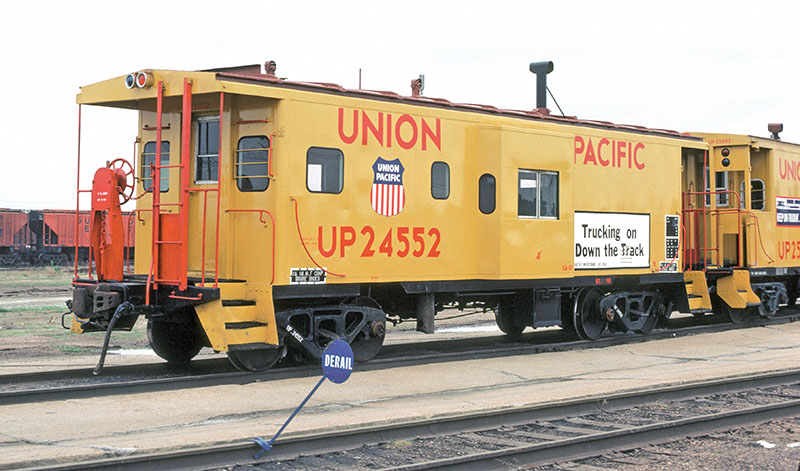 ABOVE: Union Pacific 24552 began its career as Rock Island 17134, as part of a 1967 group of bay window caboose deliveries from International Car Co. Research indicates this waycar was the first of Rock Island’s fleet to receive the Armour Yellow treatment. Note the different steps, peak roof profile, and roller bearing truck sideframes of UP 25842 coupled to this ex-Rock Island example. Union Pacific had recently purchased bay window caboose models in 1979 (the road’s CA-11 class); 25842 is part of that group and not one of the Rock Island survivors to join UP’s roster. The two fresh cabooses were at Council Bluffs, Iowa, on May 19, 1980. — Kevin EuDaly collection

Union Pacific numbered these ex-Rock Island cabooses 24500–24629 and the fleet made up UP’s CA-13 class. Bluford Shops selected two Union Pacific road numbers (24515 and 24599) for release with its N-scale bay window caboose models. If you’re looking for this caboose as it was during its Rock Island days, Bluford Shops also produced two road numbers (17124 and 17170) decorated in the road’s attractive red and yellow with black roof scheme. As these Rock Island cabooses came to UP’s roster, the road had just bought 100 similar examples from International Car Co. in 1979. Those cabooses made up UP’s CA-11 class. Please with its CA-11 class fleet, UP was finalizing some modifications to this design and preparing an order for CA-12 examples in 1980. The prototype for UP’s CA-12 fleet was 25842 (shown above with ex-Rock Island CA-13 class member). The arrival of Rock Island’s refugees erased the need for the planned batch of 100 more bay windows and they were never built, though the class placeholder remained and Rock Island’s bay windows received CA-13 class labeling.

ABOVE: Details and decoration are well executed on Bluford Shops’ 1:160 replica of this International Car Co. prototype. Compare the colors and design of the model with the provided prototype images; as with other Bluford Shops efforts, this is a well-researched presentation.

Bluford Shops makes some of the finest N-scale models on the market today and these new series of bay window caboose offerings are a great addition to their catalog. The model consists of a plastic shell and underframe with many separately applied detail parts. The body shell includes flush-fitting clear window glazing with simulated rubber gaskets or metal frames surrounding the openings. The ends include thin railings and brake wheel details. The roof includes separate stacks and the underframe possesses brake and air line rigging. You’ll notice the grab irons on the sides and ends are separate features presented in appropriate color. This is truly an excellent caboose model. This Union Pacific release shows off the attention to detail and quality of the application of paint and lettering. The model correctly features a black side sill, porch surface, and underframe. The body is Armour Yellow, and a very pleasing rendition of this famous UP hue, with a brown roof. The end railings and grab irons are presented in red and match well with the color of the pad printed lettering on the model. The addition of black and silver paint accents framing the windows adds much to the appearance of this release. The bay’s angled side window frame on this UP release, is a thin separately applied silver detail piece.

ABOVE: This N-scale bay window caboose model not only looks great, but performs well too. The model features body-mounted knuckle couplers secured to the underframe by small screws. The model rides on leaf-spring caboose-style truck sideframes fitted with metal wheels.

The sample weighed in at just a bit less than one ounce, and coupler height and wheel gauge all checked out to be good. Bluford Shops’ caboose rides on leaf-spring caboose truck sideframes with smooth-rolling Fox Valley Models-made metal wheels. The fully assembled N-scale model comes with knuckle couplers, which are secured to the underframe by screws in coupler pockets.
This model comes in a clear jewel case box with thin, clear inserts holding the model in place. Though I neglected to include it in this presentation’s pictures, Bluford Shops includes a two-piece axle generator for install on the model (as shown on the prototype picture of UP 24573).

See It In Action