For its HO release, you’ll find a ladder-type modern fire truck included with Menards Collectibles Fire Station. This version sells for $69.99 and comes with ports for connection to a power source to operate.

A new Fire Station is a recent addition to Menards’ Collectibles line of model railroad structures. Similar to other structures produced for this line, Menards’ release comes fully assembled, includes illumination, and arrives on a base with scenery provided. Also following the same practice of past Menards’ buildings, this fire station includes figures and vehicles, as well as a number of details that add to the product’s value and enhance the building’s eye appeal.

If you’re a hobbyist of a certain age, you will likely give this new Menards Collectibles Fire Station one look and quickly notice the similarity to another famous fire station. Running from 1972 to 1977, “Emergency!” was a popular television program that aired on NBC. The show centered on the paramedics of Los Angeles County Fire Department’s Squad 51. Today, the term “paramedics” and the jobs these individuals do is part of the common vernacular; however, when the show first premiered on NBC-TV, this vocation was something new in the medical drama genre and increased awareness about this important job. For those interested in watching the program, I found “Emergency!” a year or two ago on one of the streaming services, and you can purchase the DVD online as well. 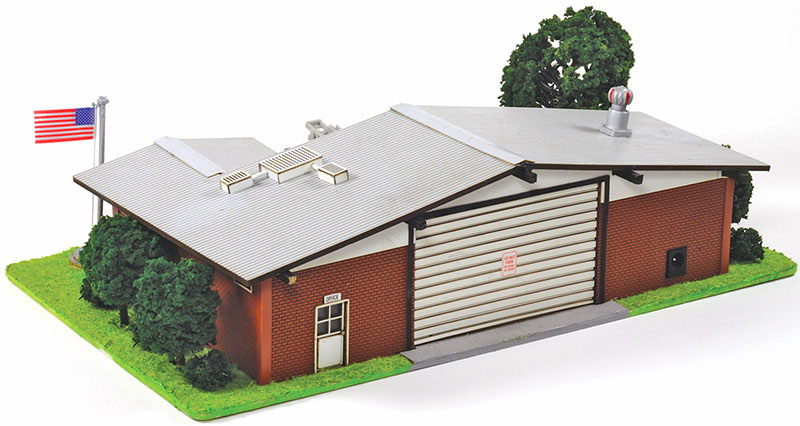 Here’s the back of the HO-scale Fire Station. The port for connecting power is one of two available; the other resides inside and is accessed from an opening on the base inside the building. If you powered this building from its inside connection, you could add a bush to hide the electrical opening.

Every Menards Collectible buildings I’ve examined have a good “fun quotient” to them, and this new fire station is no exception. The release is available in HO scale (1:87) and O scale (1:48). Both sizes follow the same design: a brick structure that includes a wide front door; a paved driveway; and a front office building located to the right. The front door appears in the open position, which is great for viewing the interior bay area. The laser-cut structure includes a shingled arched roof over the red brick walls with a white upper section on the front and rear of the building. The roof has separately applied vent and ventilation machinery. The back of Menards’ fire station includes a wide, detailed door matching the size of its front door. There is also an entry door and a port for accepting electricity to power the provided lights and running the rooftop vent’s blades.

The exterior of the fire station includes white illumination, plus small red lights located at many points across the main garage area and the entry office building. The front includes signage for “Fire Station No. 12” with a department seal and message board. This is a flat, multi-color printed decoration and provides a great opportunity for you to create a name for the station and/or revise the message board to your liking. The rear door includes an office label over it, and the rear bay door has a white warning sign with red lettering. 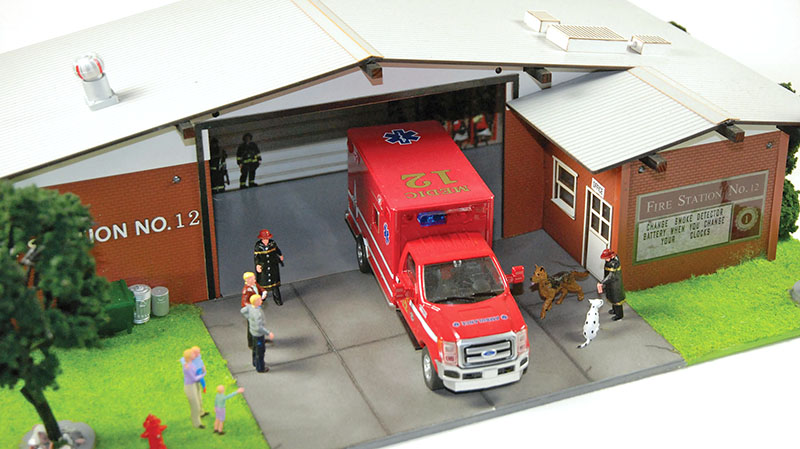 Menards promotes this release as presenting a 4th of July open house for the local Fire Station No. 12. The provided figures include two dogs: one is an expected fire department Dalmatian mascot, and the other is Menards’ German Shepard mascot.

Details abound on these releases from Menards Collectibles. This fire station includes a flagpole with an American flag, a red fire hydrant, a green dumpster, and two silver trash barrels. Decorated figures include uniformed firefighters, as well as a traditional Dalmatian and Menards’ own Jack the German Shepherd dog. Menards promotes the model’s scene as being the fire station’s annual July 4th open house, hence the visitors standing near and viewing the emergency equipment on display. The base is covered in a grass material with shrubs and bushes of various sizes on the sides of the building and a large tree located in the front yard.

This HO version of Menards Collectibles’ Fire Station sits on a base that includes scenery. Both releases, HO and O scale, are made of laser-cut board components.

This building is a typical representation of a familiar prototype. The mentioned “Emergency!” television program used an actual Los Angeles location for some of its scenes. This architecture is one that is common to many towns and cities and as such could make itself at home on a number of model railroads.

The provided vehicles are very contemporary; however, with some work, you could back-date the era to perhaps as far back as the 1950s. Speaking of custom projects, while Menards Collectibles’ fire station certainly provides a “toy train” appearance to a good extent, this offering could be worked into the more serious modeler’s layout and make a respectable addition to the miniature landscape. The HO version’s base requires a plot of land on your pike for a 10.75-inch long by 6-inch wide area with an overhead clearance of 3¼-inches (the height of the provided tree on the left side of the building’s front). For placement on your O-gauge pike, you’ll need 10.75×17 inches for the base, and the height tops out at 4.75 inches. 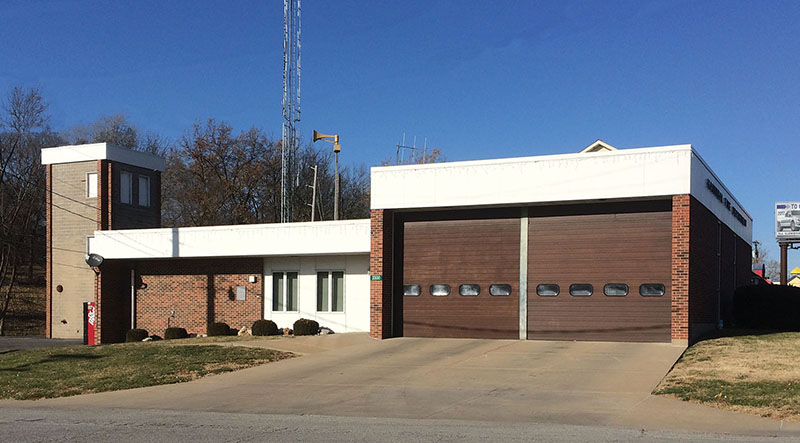 Here’s a view of First Station No. 3 in Hannibal, Mo. Notice the general similarities between this prototype and the new Menards Collectibles release. Built in 1968, this prototype structure received a remodel in 2009 and continues to serve this Missouri community today. Don’t forget to add details! Note the satellite dish and Dr. Pepper vending machine in this picture.

You can power this and other buildings sold by Menards with the separately sold 4.5-volt power source (#279-4061 single outlet, MSRP: $7.99 or #279-4062 with three outlets, MSRP: $9.99). The models will accept power from the lower back wall exterior, as well as via a port hidden inside the structure and accessible from an opening on the floor base. 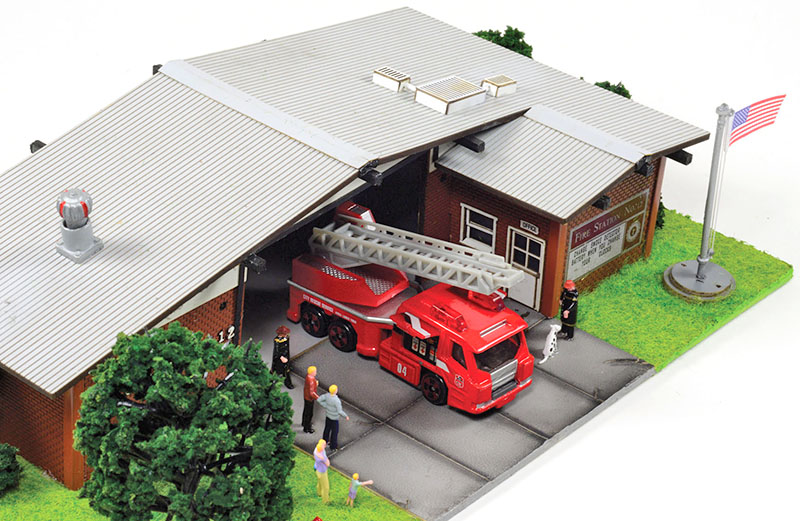 If you’re going with a permanent placement, you’ll likely want to power the lights and animated vent from the port located inside, and I’d suggest camouflaging the exterior receptacle with a shrub or bush. You’ll find ready-made trees and other scenic materials available by searching “Menards Collectibles” at the store’s website. I have found many of the items mentioned in local Menards locations in the Kansas City and St. Joseph, Mo., areas near my home.

The main goal of this great hobby is to have some fun with your free time. Menards Collectibles adds fun with its selection of buildings and related accessories available to HO and O enthusiasts. You can purchase items online and have them delivered to your home, or you can skip the shipping cost and collect them during your next visit to your local Menards store. 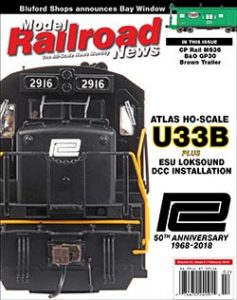