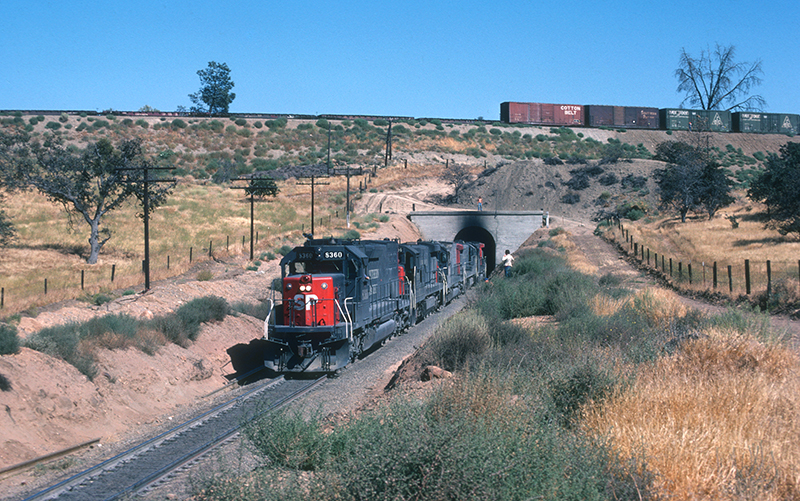 Southern Pacific 8360 is one of the specially discounted HO-scale SD40T-2 Tunnel Motors available from ScaleTrains.com for its “Trains, Not Ties” Father’s Day offering. This unit is on the point of train at world-famous Tehachapi Loop in August 1978. -Russell Eslick photo, Kevin EuDaly collection

Originally purchased by Southern Pacific (SP) and Rio Grande, Electro-Motive Division’s (EMD) “Tunnel Motor” variant of its popular SD40-2 offering is a fan favorite. Introduced in the early/mid-1970s as the “Dash 2” era was getting started, EMD responded to the needs of Western U.S. roads for a better air flow in keeping hard-working locomotives going in challenging situations like tunnels and long snow sheds, like those found on SP and Rio Grande systems.

Enjoy a look at more than 50 SP SD40T-2s and listen to executive product development manager and company co-founder Paul Ellis discuss these prototypes and what goes into making a Rivet Counter replica in HO scale. Paul is joined by host Drayton Blackgrove and fellow Tunnel Motor fans Harry K. Wong from Railroad Model Craftsman and Tony Cook from Diesel Era and Model Railroad News. The guys are back, after talking recently in ScaleTrains.com “All About SD45s” show and share memories and discuss these six-axle brutes in detail.

If you’re looking for reference materials on EMD’s SD40T-2s, check out the two-part series on Southern Pacific’s fleet in Diesel Era Vol. 19, Nos. 2 and 3 from 2008. Rio Grande’s SD40T-2s are covered in Diesel Era’s 2002 Vol. 13, No. 4. Back issues from the 1990s to the beginning of 2021 for Diesel Era are available from Withers Publishing. Subscribe today to keep up with White River Productions’ Diesel Era, which launches with its 2nd Quarter 2021 edition in late June.

For Father’s Day 2021, ScaleTrains.com is offering a special discount on select SD40T-2s. Check out the prices and availability on these SP SD40T-2s in the “Trains, Not Ties” promotion… 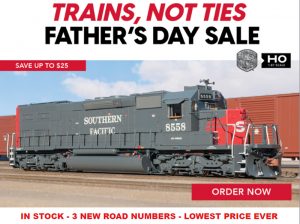