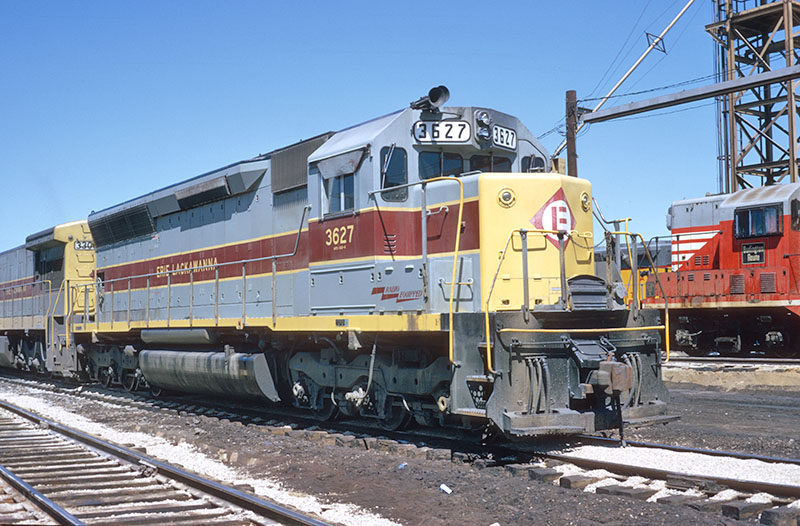 Bought in 1967 and 1968, Erie Lackawanna operated 34 examples of EMD’s SD45 diesel locomotive. From the second order, EL 3627 is mixing with Grainger great Chicago, Burlington & Quincy, and western giant Union Pacific motive power at Cicero, Ill., on June 10, 1972. Note the black roofline that just slips over the edges of the contour between sides and top of this SD45, ScaleTrains.com has announced enhancements to its coming EL SD45 Rivet Counter releases to more accurately address this finer features. – Charles Stumpf photo, Kevin EuDaly collection

In a coming third release of Electro-Motive Division (EMD) SD45 diesel locomotive models in HO scale, ScaleTrains.com will include Erie Lackawanna (EL). The road bought SD45s in two groups and ScaleTrains.com’s focus for this production is the second group of 14 six-axle brutes added to EL’s roster in mid-1968, this collection received numbering (3621-3634) directly after Erie Lackawanna’s 1967 purchase of 20 SD45s (3601-3620).

Thanks to input from rail enthusiasts, several features have been double checked, confirmed, and revised on several of these road numbers. Here’s a rundown of the new features/changes that will be included on this Rivet Counter run of HO-scale Erie Lackawanna SD45s. 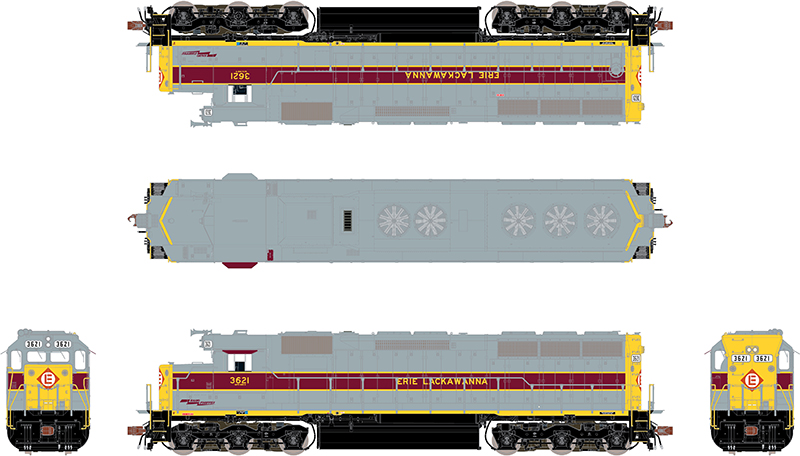 ABOVE: EL 3621’s revisions will include a gray roof and accurate mix of maroon sunshade on engineer’s side cab and gray sunshade on fireman’s side. This model is ScaleTrains.com’s SXT32900 (DCC-sound) and SXT32901 (DC version). 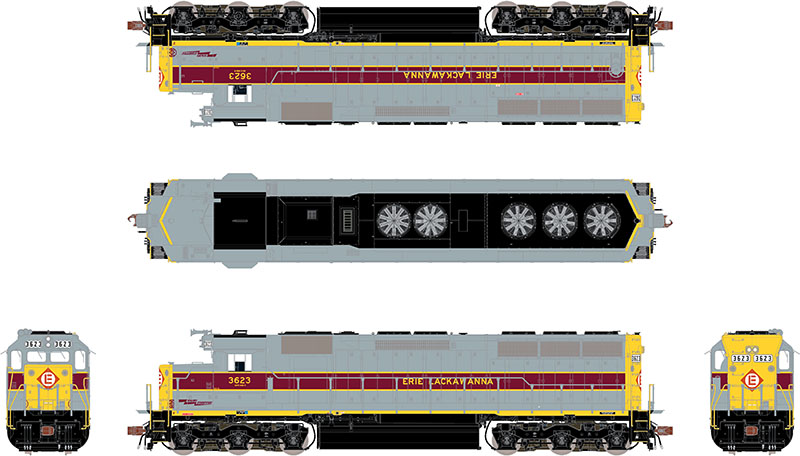 ABOVE: EL 3623 will feature a black roof that carries down on to the angled portion of cab roof slightly, and stopping short of corner radius on long hood. “Safety First” labels will be added to nose corners, and maintenance stencils will appear on cab side corners, all as per a 1970s appearance. This model is ScaleTrains.com’s SXT32902 (DCC-sound) and SXT32903 (DC version). 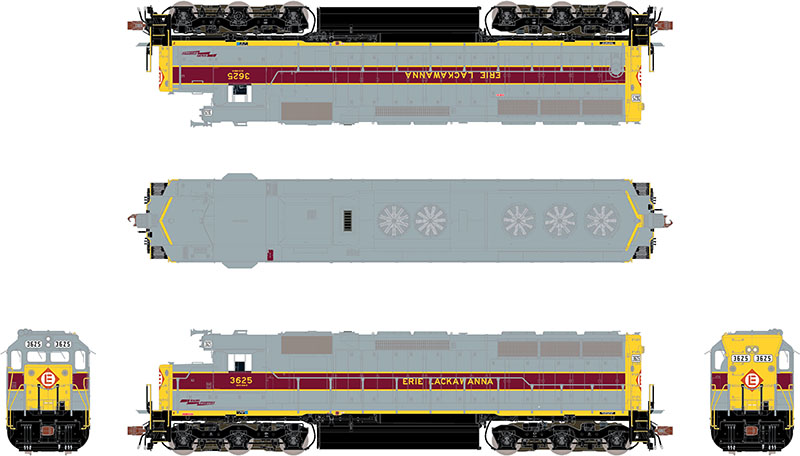 ABOVE: EL 3625 will come with a gray roof and inner handrail stanchions on front and rear pilots will be presented in black, as will the MU stands on each end of the unit. This model is ScaleTrains.com’s SXT32904 (DCC-sound) and SXT32905 (DC version). 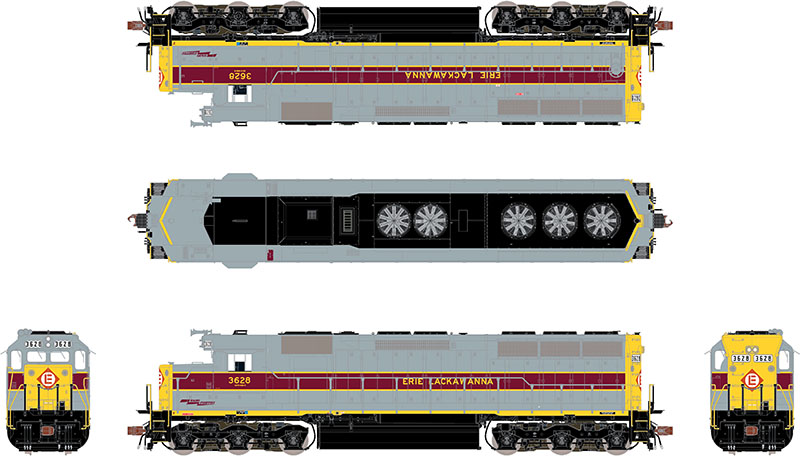 ABOVE: EL 3628 will sport a black roofline that will stop short of corner radius edges on the long hood. In addition, this release will come with black handrail stanchions on the ends and will receive black MU stands mounted on the pilot surfaces on each end. This model is ScaleTrains.com’s SXT32906 (DCC-sound) and SXT32907 (DC version). 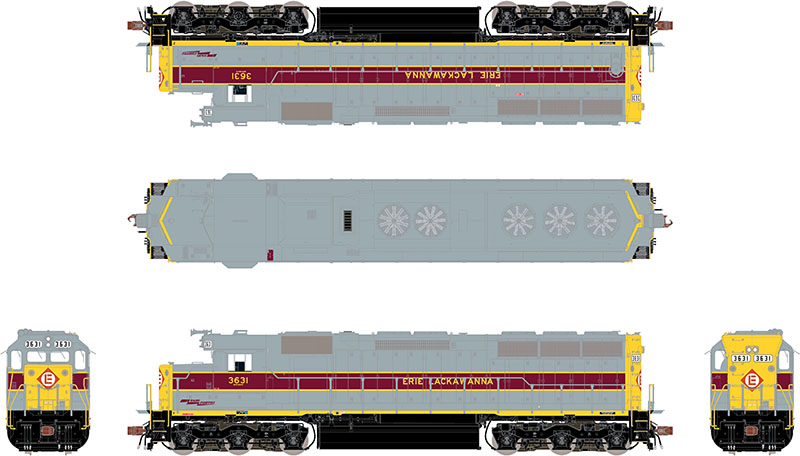 ABOVE: EL 3631 will now feature a gray roof and will carry gray sunshades on the cab sides. This model is ScaleTrains.com’s SXT32908 (DCC-sound) and SXT32909 (DC version).

This release is now accepting reservations from hobbyists via ScaleTrains.com directly and through its dealer network. The models will come fully assembled and loaded with separately applied, road-accurate details, in addition to the authentic and correct livery and decoration. ScaleTrains.com will provide its HO-scale Rivet Counter SD45 release with Digital Command Control and audio output with ESU electronics featuring LokSound 5 with “Full Throttle,” “PowerPack” twin super capacitors, and sound reproduced by dual cube-type speakers. The audio will recreate authentic EMD 20-cylinder 645E3 turbochaged prime mover sounds. The DC version will come with a 21-pin socket for easy conversion to DCC with your own choice of decoder. 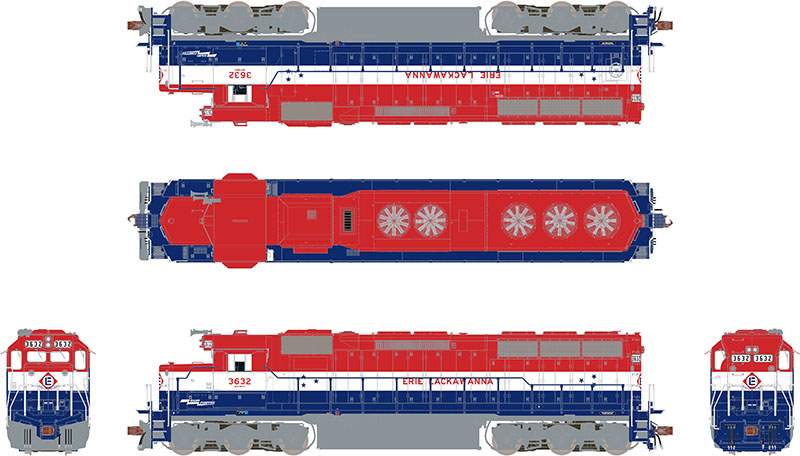 ABOVE: Also coming is EL 3632, one of the road’s U.S. Bicentennial locomotives. This Rivet Counter release is sure to be a collector favorite.

Find out more about the coming Erie Lackawanna SD45s and other road names announced by ScaleTrains.com in this YouTube video… 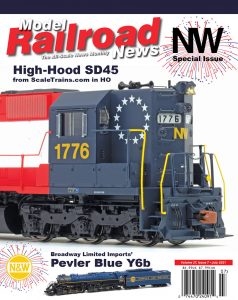 More SD45s from ScaleTrains will be in July 2021’s Model Railroad News available in early June!