This impressive O-scale exterior-post insulated boxcar comes fully assembled and includes sprung roller bearing truck sideframes with spinning bearing caps. This Coors release was produced in two numbers (24 and 26) and is based on an early 1960s prototype of similar looking freight car.

Lionel announced a new tooling “beer car” model in the company’s 2020 Big Book catalog. The model is based on a Pacific Car & Foundry (PC&F) prototype that dates to the 1970s with examples found in service today. The highly detailed reproduction is a scale representation and measures 14 inches or approximately 57 scale feet in length. This model presents a popular and common insulated beer car prototype that served many railroads and various shippers, as well as appearing in lease fleet service.

ABOVE: Yes, there were beer cars decorated in this style for Golden, Colorado’s Coors Brewing Company. The prototype dates from the early 1960s and the model is a newer design but similar freight car.

A common fixture of train lines for decades, rolling stock with beverage brand decoration can easily be dismissed as a hobby company unable to resist sales and not based on any prototype. This style Coors car has seen release in the past in various scales. It’s a bit of an elusive prototype to track down. I’d seen what looked to be a Coors car of this variety in a Rio Grande consist in a book, but couldn’t determine if it was or not. The first good picture of a Coors car of this variety (there are early wood-side reefers that are more common to locate reference materials) was in an issue of Trains & Railroads of the Past. Some additional searching over the years at train shows turned up two shots of what looks to be the Coors cars in new condition in February 1963. As you can see from the provided prototype image, Lionel’s model does a very good job replicating the scheme. The prototype appears to include a red underframe (the model offers red truck sideframes) and the real car featured running boards, high-mounted brake wheel, and tall ladders. In doing research on these cars, I found they belonged to Transportation Leasing (TLDX reporting marks) and there appeared to be only three cars in this elaborate rolling billboard Coors livery (TLDX 24, 25, and 26). 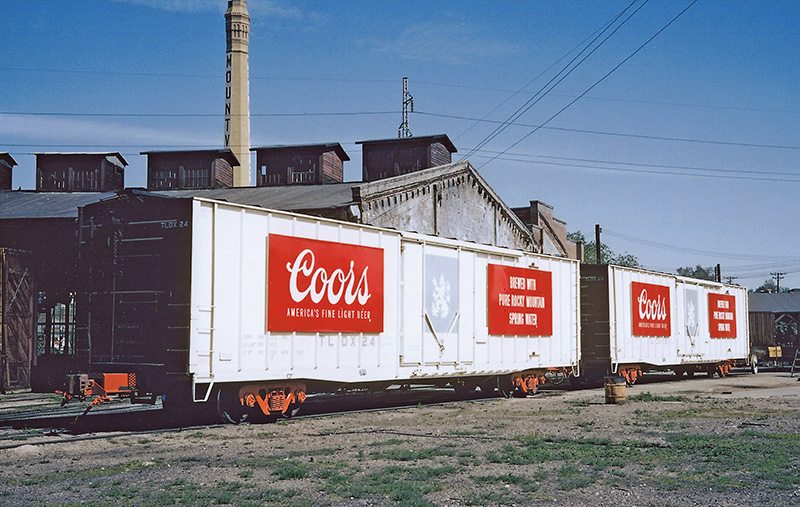 ABOVE: TLDX 24 and 25 are shown in their Coors billboard scheme with red trucks and underframe in this early 1963 photo. — Tony Cook collection

The tooling presents a plastic body shell with many separate plastic and metal details. You’ll find see-through metal crossover platforms over the couplers on the end of the car; tack boards on the sides and ends appear to be separate, as are the ladders all around the model. 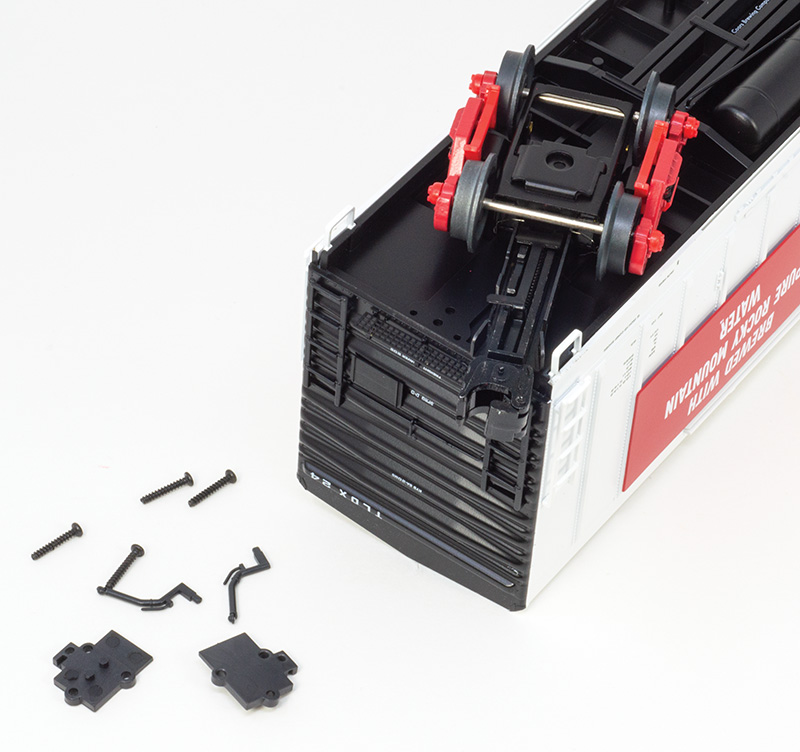 ABOVE: Lionel presents its PC&F beer car model with operating O-gauge couplers with hidden uncoupling tabs. The couplers come mounted to extended draft gear-style arms connected to the detailed and eye-catching red truck sideframes. For those desiring body-mounted couplers, this release comes with the accessories shown below (coupler plate with screws and trainline hose).

On the detailed 12-foot insulated door, the handle and runner rods are separate and really bring out this area of the car. The underframe is presented in black with air and brake rigging represented well. For this Coors release, separate metal plates include the two red boards and the center gray panel on the door. Lionel recommends operation on O36 curves or wider for this scale-length model.

I bought this example from New York’s TrainWorld (trainworld.com) as a display piece and am happy with this O addition to my collection. Other road names in this production include Burlington Northern, BNSF, Conrail, Manufacturers Railway Co., Santa Fe, and Southern Pacific, with variations to decoration on select roads. 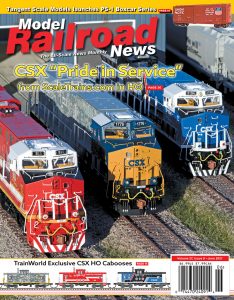 Read this and more in June 2021’s Model Railroad News!