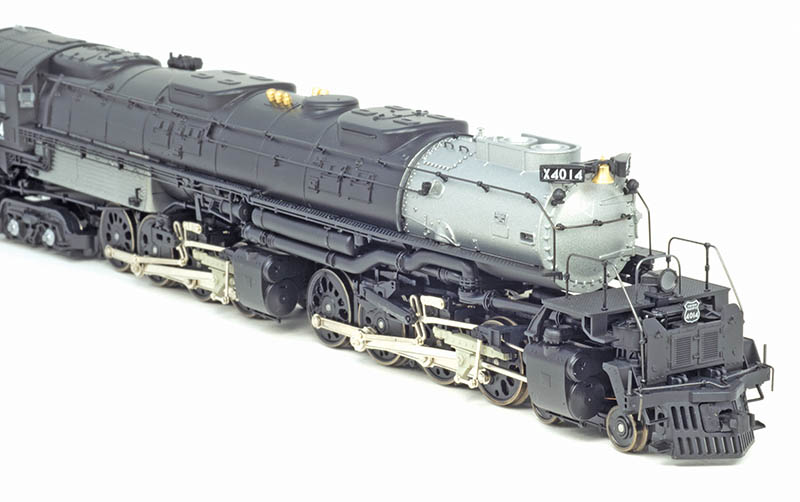 The look of a newly restored giant. Trix presents this Big Boy with details to replicate Union Pacific’s contemporary 4014. This view shows the installation of a provided front cover and surround plate covering. Trix includes an open-grate cover for this coupler area in user-applied parts included with this release.

HO scale – For its 2020 re-release Märklin/Trix revisits Alco’s mightiest of steam locomotives with a contemporary take on this Union Pacific (UP) classic. About two decades ago, Märklin/Trix introduced a series of models in HO scale that rank among the best offerings this well-known European brand has ever done replicating North American prototypes. Those late 1990s/early 2000s selections depicted largely UP examples, which included an excellent rendition of the road’s steel, center cupola CA-3 caboose, as well as a group of freight cars, an Alco PA-1 diesel locomotive, and a 4-8-8-4 “Big Boy” steam locomotive. 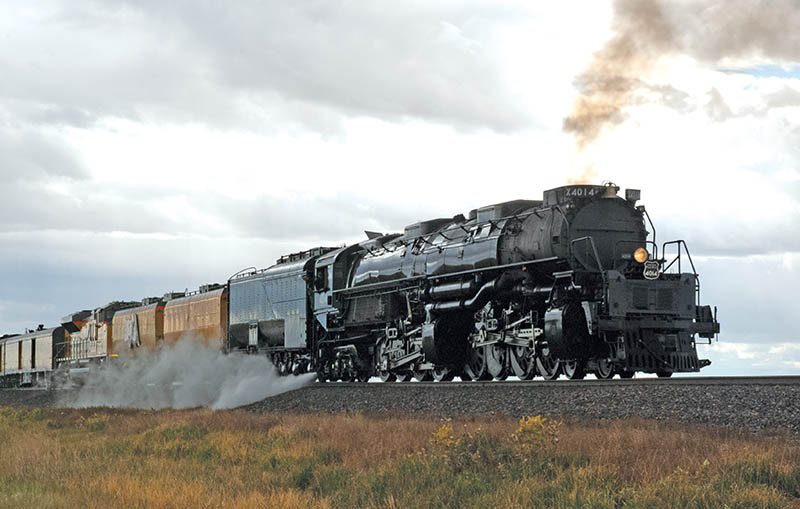 ABOVE: West of Laramie, Wyo., UP 4014 slowed for traffic on the line during this late September 2019 run. This view shows the storage boxes on the tender side included on Trix’s new Big Boy release. — Tony Cook photo

Naming Rights
The story on the famous name comes from an Alco worker tagging the face with “Big Boy” in chalk on an example under construction. The name became the handle for these 4-8-8-4 steam locomotives. Union Pacific was the sole owner of this big Alco with 25 examples on the roster coming in 1941 and 1944. The Big Boys took up residence in the railroad’s 4000-series and went to work on the Wyoming Division. This stretch of the Transcontinental Railroad between Cheyenne, Wyo., and Ogden, Utah, included a climb over Sherman Hill and the Wasatch Range. The terrain provided this articulated steam locomotive with the ability to show off its prowess at handling loads on challenging grades and also gave the fleet some wide open running at speed across vast stretches of the American West.

Arriving late in the steam era, UP’s Big Boys ran to the end of steam, with their last regular assignments happening around 1960. Of all the steam locomotives produced, this prototype enjoys the highest percentage of preservation (seven were saved from scrapping) with examples on display in many parts of the U.S.
Among those seven survivors, none was operational… until recently. UP 4014 had been on display at RailGiants Museum in Pomona, Calif., until a project got underway in 2013 to restore to service this biggest of steam locomotives.
In May 2019, UP 4014 took part in the 150th anniversary of the driving of the Golden Spike commemorating the completion of the U.S. Transcontinental Railroad. After this event, UP took 4014 out on tour. About a year ago, Model Railroad News’ Assistant Editor Shane T. Mason invited me to join him on a trip south to the Kansas/Oklahoma border for a railfan run back north to Kansas City chasing UP 4014. This was my second experience seeing a Big Boy in operation. My first meeting with this amazing locomotive was in late September 2019 for a road trip with podcaster Lionel Strang of A Modelers Life. On that journey, we caught up with a special run powered by 4014 at Laramie, Wyo., and enjoyed a fall day chasing west across the state to Rawlins, along with a parade of other railfans. To say the least, both experiences are unforgettable and this is a very impressive steam locomotive. 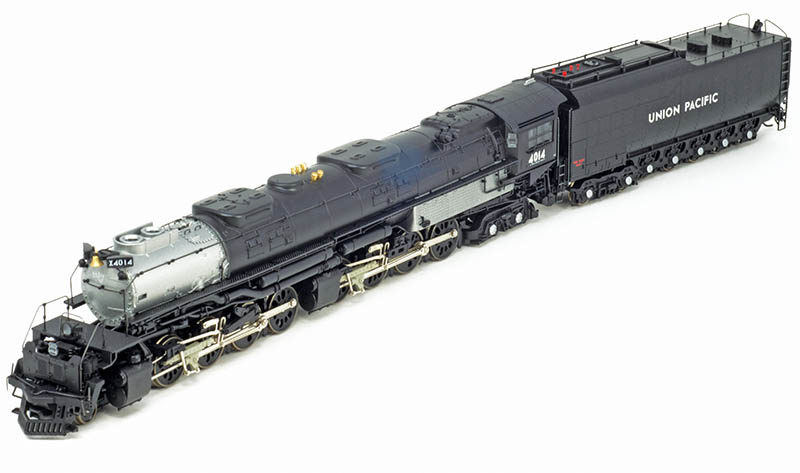 Impressive Reproduction
Though I consider myself an avid collector of all things HO scale, I’ve never had a model of Union Pacific’s Big Boy in my collection. The now-classic AHM release is on my list, and I’ll add one someday, but this Trix replica is a first for me. I’d collected examples of all of Trix’s HO-scale freight cars produced as part of the release that saw this Big Boy come to the company’s line, and all were very impressive models. Impressive is the word for this prototype and any model of it would have to be an amazing sight. Before I discuss the model itself, the first impression you’ll have of this release begins with the unboxing.

The outer cardboard sleeve includes Trix’s familiar gray with yellow scheme and a photo of the locomotive. Inside this box is a sturdy white cardboard box and in that you’ll find a wood case. The case measures a bit more than 20-inches wide. A pair of gold clasps secures the wooden lid to its base. The top of the case includes a gold crest with the face of the locomotive and Big Boy name; Trix’s name appears in green in the upper right corner of the lid surface. Inside the case, two foam liners (top and bottom) securely cradle a matching finish wood base and the model itself. The display base and model are wrapped in clear film for protection.

Trix’s HO-scale Big Boy, which measures approximately 18 inches, is held firmly to the wood base by three screws. A standard hobby screwdriver is required to free the model from its base. This procedure requires some patience, which will be a challenge as you’ll be excited to get this model on the track to view and operate at this point. I used the foam cradle housed in the lid to sit Trix’s Big Boy with the base facing me to release the three screws. This seemed to work well. You’ll find the screws include two washers each a round gold piece to make the fit snug. Keep track of these items for future storage needs. A red card is included over the clear wrap that alerts you to the screws and also notes additional materials are awaiting beneath the lid’s foam liner.

The materials provided with Trix’s HO-scale Big Boy include a color 50-page booklet on the prototype. This multi-language informational publication gives facts, history, and color images of this amazing prototype. Trix’s 40-page guide for the model is included, as is a bag of details. The bag includes two decorated crew figures, alternate couplers, and front pilot coupler cover.
The owner’s manual presents its English language information on page 10. Important to note in handling this Big Boy is to be careful in generally keeping the locomotive and tender as level as possible. There is no coupler or plug connection that the modeler must make to assemble the locomotive to its tender. The model comes ready to place on your track, but you need to be mindful of this tethered connection when handling the two parts.

The manual suggests a two-person test run on your layout to be sure curves and clearances will not present any operational issues. Being an articulated locomotive, though it may be long you’ll find that the model can operate around fairly tight curves. You’ll likely run into concerns with scenery or other trackside details that might be in the way before you’ll encounter trouble getting around curves on most pikes. 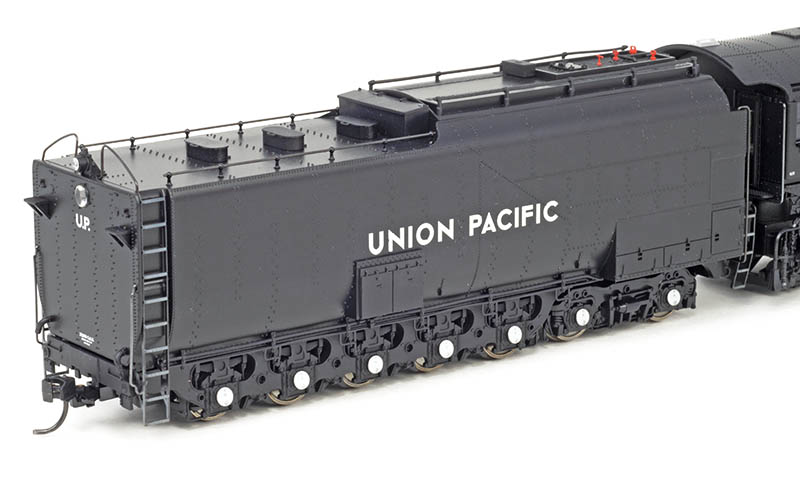 ABOVE: Trix’s UP 4014 release presents an oil-fired reproduction with modifications made to the die-cast metal tender to replicate this appearance. The forward roofline includes new details versus a coal load featured on past production models. A storage box is new on the side of the tender below the road name, as are the two steps on the upper corners of the tender’s back.

With the revisions made and decoration applied, Trix delivers a Big Boy for 21st century modelers… by that I don’t merely refer to its fine exterior detail and inner electronics technology, but also the look. Even the most die-hard diesel enthusiast can get a hankering for steam and this is a contemporary prototype in this Trix presentation. Details, decoration, and revisions from past production include the obvious addition of the famous chalk “Big Boy” on the face of the locomotive. A silver skate-type antenna appears on the cab roof of this release. To match UP 4014’s setup, this model features an oil tender. The tender, which is made of die-cast metal, includes an accurate protruding storage box for safety equipment on one side. You can spot it below the road name on the engineer’s side of this locomotive. The roofline of the tender includes details (some highlighted in red) to replicate this version being oil fired. There are two steps added near the top of the tender’s back side to better present the appearance of the restored Big Boy. The tender length checks out to match the prototype’s approximate 45 feet, and includes the non-swiveling five-axle stationary wheelset with the pivoting four-axle truck in the forward position. These wheels are metal and match the 42-inch diameter of the prototype. The coupler pocket on the rear of the tender includes side-to-side sway ability. As-delivered, you’ll find a metal knuckle coupler fitted into the NEM-compatible pocket. Coupler height met the desired height for trouble-free operation. The coupler design includes an over-shank appearance for the knuckle that is common to Trix’s North American series of releases.

ABOVE: Here’s what lies beneath Trix’s boiler/cab house and tender shell. The drive mechanism resides near the center of the locomotive above the driving wheels with DCC decoder located behind the motor. The tender is semi-permanently tethered to the locomotive and houses the speaker.

On the locomotive, which possesses a die-cast metal boiler, the change over to being oil-fired is noted by the removal of the ash pan details below the cab and over the trailing truck. The cab’s back head detail shows revision for being oil-fired and there’s even a UP 4014 emblem adorning the floor of the cab. You’ll find a pair of generators appear near the top of the boiler surface back near the cab on the fireman’s side of the model.

Railings and piping on the locomotive and tender are wire presented in black matching the body. The fidelity is very good on these details and you’ll find them durable thanks to their wire construction. The separately added details on the metal boiler appear to be plastic and select items are highlighted in color to bring out these details. Up front, the porch-like pilot area includes walkway pattern detail, as do the accessways down the sides of the boiler. The low-mounted headlight on the front pilot is LED powered and authentically fades in/out by pressing F0. Below the headlight is a stand-up UP shield with 4014 on it. A coupler cut lever is among the separate details to catch your eyes on the front end of this release. Provided in the parts bag, you’ll find a knuckle coupler, an NEM-style coupler, and an angled cover section. The coupler slides into the pocket on the front pilot or if you leave the front coupler off the model, you can fix the cover into position.

Between the slanted number boards above the boiler face is a gold-colored bell. Decoration to the locomotive includes the graphite silver/gray hue to the front of the boiler with this same color appearing along the back sides of the locomotive. Silver bearing coverings are included on the trailing truck below the cab and on the axles of the tender. Lettering delivers UP’s classic look with white numerals below the cab and the road’s name spelled out across the tender sides in accurate typeface. Additional lettering details include an Alco builder’s plate on the forward sides of the boiler, and appropriate lettering on the tender’s rear.

Read the rest of this review in the October 2020 issue of Model Railroad News!